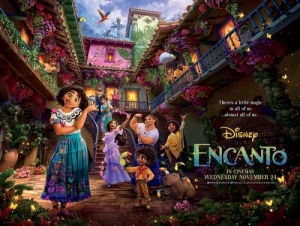 BASICALLY…: A family living in a magical house receives special abilities, except for one (Beatriz) who is the only one that can save them…

Although they’ve seen a healthy amount of hits at the recovering box office, it’s been a slightly rough 2021 for Disney, between their divisive day-and-date release strategies between theatrical and the pricey Disney+ Premier Access option, and public (but since resolved) lawsuits from the likes of Scarlett Johansson. Luckily, Encanto is here to cap off their rocky year on a much more positive note, as though the studio predicted its year would be not so great and saved one of their best for last.

Disney’s 60th animated feature film, and its first to feature an entirely South American cast, is a vibrant, gorgeous and incredibly entertaining musical that hits all the right notes with its story and songs, introduces some wonderful new characters, and plays around with modern Disney formulas enough to make it stand out from some of the more standard cartoon features they’ve put out in recent years.

The film is set within an enchanted village hidden in the Colombian mountains, which is home to La Casa Madrigal, a magical house that endows its residents, the Madrigal family, with special powers such as super-strength, healing, and the ability to talk to animals. However, the only family member to not receive any powers is Mirabel (Stephanie Beatriz), who must endure her family’s boastful abilities while she is left uncertain of her own path. When she starts noticing cracks in the house that nobody else seems to see, Mirabel decides that her destiny lies in saving the family’s magic, and so she sets out to save the day.

Except, she doesn’t really set out, since the entire action pretty much takes place within this one house. Unlike a lot of other Disney movies which involves the protagonist going out into the world for their mission, Encanto keeps the adventure contained to the many TARDIS-like rooms of La Casa Madrigal, allowing for a much more focused narrative that shines plenty of much-needed light on the numerous supporting characters instead of the spectacle and wonder of the world around them. It’s a refreshing move by directors Jared Bush and Byron Howard (who respectively wrote and directed Disney’s Oscar-winning Zootropolis), which keeps our attention where it needs to be rather than give in to unnecessary diversions, all while indulging in some beautiful and exceptionally colourful animation that ranks among some of the brightest and most dazzling of modern-era Disney.

The contained plot also allows for plenty of time with these characters, who each have incredibly entertaining qualities to them. Beyond the incredibly likeable protagonist Mirabel, voiced with spirit and sung with passion by Stephanie Beatriz, we spend a good amount of time with her family and their unique set of powers, which often lead to lots of humorous moments but more importantly some poignant character development. They start off as self-obsessed blowhards who define themselves by their intricate powers, overseen by their matriarchal Abuela who at times can be extremely cold-hearted to the kind and resourceful Mirabel; in any other Disney movie, these would be the straight-up villains, especially the Abuela character, but the fact that they are all on the same side is a striking and even provocative statement even for Disney, effectively saying that even the people you are supposed to be loyal and respectful towards may not always hold your best interests at heart. This makes for much more interesting dynamics than in, say, Raya and the Last Dragon, which although not bad did stick to certain themes and tropes that did hinder its overall impact; Encanto feels a bit more genuine in its approach, especially in showing how mean and even emotionally abusive some of these family members can be.

Of course, no Disney animated musical wouldn’t be complete without a lively soundtrack, and master lyricist Lin-Manuel Miranda delivers that in spades. Though perhaps not as immediately catchy as his songs for Disney’s past animated hit Moana, Encanto’s tunes contain a fiery spirit that celebrate the central Colombian culture and move the story along at a brisk and heavily infectious manner, with Miranda setting a good number of the songs to his trademark hip-hop like rhyming style that makes for some memorable verses and deliveries. However, the soundtrack is missing its own “Let It Go”, that one iconic show-stopper which instantly leaves its mark on not just the history of Disney’s discography, but the cultural zeitgeist as a whole. There are certainly plenty of fun musical numbers with strong lyrics and even more poignant singing, but there isn’t anything that sticks out like a well-pruned thumb – at least, not after one initial viewing.

On the whole, Encanto is one of Disney’s finer animated outings in recent years, with its vibrant soundtrack and absolutely stunning animation already being good enough, but the fact that it actually takes time to explore these characters instead of the world around them does make all the difference, especially after so many Disney adventures that settle for the big epic adventure template. Here, things are shaken up enough to feel a little more worthwhile and, indeed, certainly bring the magic closer to home.

Encanto is a vibrant and exceedingly lovable animated musical from Disney, which not only contains some gorgeous animation and a fun soundtrack, but also takes the time to explore its characters instead of the encapsulating world around them, resulting in a much more intimate offering from the studio than some recent examples.

Encanto will be released in cinemas nationwide on Wednesday 24th November 2021 – click here to find a screening near you!