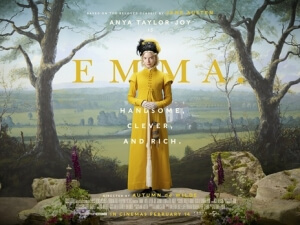 She is one of the world’s most adapted authors, but even Jane Austen would be taken aback by debuting director Autumn de Wilde and writer Eleanor Catton’s new take on her classic story Emma.

While it is most certainly the same story that every Austen reader knows inside and out by this point, de Wilde and Catton offer a slightly more stylised take on the material, opting for an approach that’s one-sixth Wes Anderson, one-third Yorgos Lanthimos, and one-half Instagram-era cattiness disguised by old Regency manners and habits. An odd mixture to say the least, but it makes for a visually splendid adaptation that is boosted greatly by its dry wit and the strong performance of its lead actress.

Anya Taylor-Joy plays Emma Woodhouse, a young affluent woman who lives with her hypochondriac father (Bill Nighy) in a small countryside town. Emma is beautiful and rather smart, but unfortunately she knows it all too well, and has decided – largely out of boredom and to satisfy her monstrous ego – that she is a matchmaker for some of her closest associates. She begins to manipulate several people such as her sweet and innocent new friend Harriet Smith (Mia Goth) to pair her up with eligible bachelors that only she sees fit, ranging from the conniving priest Mr. Elton (Josh O’Connor) to the dashing – aren’t they always in Austen stories? – Mr. Knightley (Johnny Flynn), who is the only one to see through Emma’s false intentions.

Austen herself referred to the titular character as a heroine “whom no one but myself will much like,” and if there’s anything that this adaptation of Emma does right by where certain other ones haven’t is to actually highlight how dreadful a character she really can be. Emma is, by most accounts, a nasty piece of work; she is manipulative, controlling, spoiled, and incredibly self-centred, all of which guide her seemingly-infallible ego to make some bad decisions that end up hurting and scarring all others around her. The way that she treats most people who she feel is beneath her in terms of class and brains is appalling, and there are many times throughout where you are actively rooting against this person for the many terrible things she says and does.

However, this is hardly surprising news to anyone who has read the original source material or seen any of the numerous adaptations – ranging from more straightforward films starring Gwyneth Paltrow, to cult classic teen comedy Clueless – and it is widely accepted that Emma is one of Austen’s most popular characters, despite her profound awfulness. The key difference is that, unlike a fair amount of those adaptations, this one is not too afraid to show the conniving nature of its central character, portraying it in a way that most young people nowadays would perhaps recognise as that one fake friend of theirs whose Facebook and Instagram page is all beauty filter and no humanity. A lot of that comes from the lead performance of Anya Taylor-Joy, who seems to have been melded by the Gods to be the perfect actress to front a Jane Austen adaptation, with not just her beauty but her well-timed dry delivery and all-mannered composure making her absolutely flawless in the role. She is not afraid to show off her character’s meanness while also tapping into her more sensitive side, doing the unthinkable and having us root for a character who by all accounts we shouldn’t be rooting for. It’s one of the most captivating portrayals of this particular role in quite some time, and should be a new benchmark for how she is portrayed in future adaptations.

The filmmakers seem to also be aware of the complicated nature of the protagonist, but instead of just blanketing it over with pretty countryside imagery and some rather gorgeous costumes, they do take time to acknowledge how much of a conundrum she really is – but they still find time to highlight how pretty everything looks. The cinematography is bursting with colour, whether it’s from the bright yellows in some of the dresses or the vast greenery of the surrounding fields, and de Wilde’s direction gives everything a somewhat dry flavour which only enunciates the witty dialogue, much of it lifted directly from the source material by writer Catton. Austen fans will no doubt be delighted with the film’s faithfulness to the story, while those less familiar with it can appreciate the style that has been poured into it, not to mention the winning performances from not just Taylor-Joy but memorable supporting turns by Bill Nighy, Joh O’Connor, Miranda Hart and Sex Education alumni Tanya Reynolds and Connor Swindells.

However, it’s easy to understand why anyone might be put off by the questionable behaviour of its lead character, because it is very hard to like this person when she says and does horrible things all throughout. Yet, it is the strength of the film’s structure, direction, and execution that even we feel a slight bit of sympathy for a person who’s not all that deserving of it, but let’s be honest: it’s because Anya Taylor-Joy was secretly put on this Earth to star in an adaptation of Emma that’s about as handsome and alluring as she is, and by goodness is her purpose more than fulfilled (though please, Miss Taylor-Joy, do stick around for a little while longer!).

Emma is a gorgeous adaptation of the classic Jane Austen story that’s undoubtedly faithful to the source material while also being a visual treat in and of itself, with even the unlikeable nature of its central character being much easier to swallow thanks to its willingness to call her out on it, as well as a perfect lead performance by Anya Taylor-Joy.

Want to decide what the movie’s like for yourself?
Check out Emma showtimes in London
via