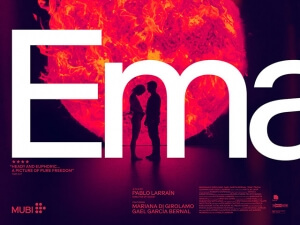 BASICALLY…: A couple (Girolamo and Bernal) deals with the aftermath of an adoption that goes awry as their household falls apart…

Every once in a while, there comes along a film that nearly every critic in the land seems to gush over, but you yourself cannot understand the reasons why it is so. That isn’t to say that other people’s opinions don’t matter – everyone is entitled to like what they like, and nobody should ever make them feel bad just because they like something that you may not – but with Pablo Larraín’s newest film Ema I spent much of this movie trying to piece together what it had that made 90% of critics on Rotten Tomatoes give this a thumbs up, because I was seriously struggling to even comprehend the damn thing.

Larraín’s film, from my personal standpoint, is a confounding mess of a movie; while it is beautifully shot, and there is no denying its ambition, not once does it ever earn its style with a plot that’s all over the place and makes it difficult to even comprehend what it’s all actually about.

The story – or at least, what I can gather from the bare pieces of information I could put together – sees a young dancer named Ema (Mariana Di Girolamo) and her older choreographer husband Gaston (Gael García Bernal) dealing with the fallout of their marriage after they give the young boy they adopted back to child services, for specific reasons we’ll get into shortly. Ema soon moves out, and begins her own odyssey of personal satisfaction which she achieves through sex, reggaeton dance, and even criminal activity.

If it seems like I’m being vague about the plot, that’s really not my intention; the plot of this movie is surprisingly really hard to follow, because the narrative keeps jumping around from scene to scene with barely anything connecting any of it. It makes the film seem like an endless parade of random things happening; one scene Ema will be dancing with her friends, the next she’ll be seducing both male and female lovers; and then that will be followed up by the titular character burning things with a flamethrower. It’s a struggle to put it all together in your head because the dialogue flies by so fast with barely any time to absorb what is actually being said; I actually felt really stupid while I was watching this, because I know that I should be able to be on top of this, but it’s not doing a very good job at keeping its audience as up to date as it wants to, so it just kind of leaves you to pick up the pieces while also with barely enough time to actually figure out what’s what like any other film would rightfully do. By the end of it, I felt like I had to read a plot synopsis online, if only to realise what was meant to have happened throughout all of it, because nothing in the movie ever felt like anything really started to begin with.

It’s a fluid kind of storytelling that I really don’t like, where the movie expects you to fill in the blanks during important pieces of information you should probably be aware of beforehand, and it not only leaves you feeling so lost when trying to comprehend it, but you end up not feeling a damn thing for the characters who are written so thinly and with such little description other than what we are given at face value that you end up feeling even more stranded. You don’t feel a shred of sympathy for Ema nor Gaston, because they both have extremely unlikeable qualities such as vain narcissism and destructive personalities which in a way make you question why they ever ended up together in the first place; you don’t even care for their constant pining for their son, who we learn was apparently something of a little sociopath from burning half of people’s faces off and killing a cat before putting it in the freezer. With that kind of behaviour, nobody would want this kid around if that’s the sort of stuff he’s doing, yet every single person in this movie sees them as being in the wrong because they simply gave him back to the authorities, even when they know full well why they did that in the first place. The needs and wants of these characters make very little sense, and they make an already frustrating movie all the more difficult to process, because the writing clearly isn’t strong enough to at least hold your attention during the portentous boredom of it all.

If there were compliments to give it, the movie does have some very good cinematography behind it; the colour palette here is gorgeous, and illuminates scenes to hypnotic, and even erotic, effect. The acting, too, is strong; despite given some very thin and ill-defined roles to play, actors like Mariana Di Girolamo and Gael García Bernal do very well to breathe some form of life into their characters. Despite that, this is definitely one of Pablo Larraín’s weakest films to date, because it never latches onto a story or characters you can fully get behind, and feels so empty despite it clearly having stuff to say but not doing it in ways that make it worthwhile.

I’m going to have to go against those 90% of critics on this one, I’m afraid; Ema, for all its ambition, just didn’t resonate well with me at all.

Ema is a confounding mess that adopts a far too fluid narrative that makes basic plot points difficult to understand, with characters whose cause you simply cannot get behind because they’re too unlikeable or don’t even make that much sense, resulting in director Pablo Larraín’s weakest effort despite the gorgeous cinematography and strong performances.