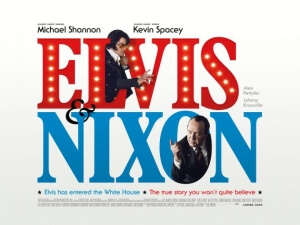 Yes, this was something that actually happened. Elvis Presley did indeed turn up unannounced at the White House, desperate to meet with then-President Richard Nixon to ask about something only Elvis himself would ask. What’s more, not only is there an official photograph with the two to prove this wasn’t some cock and bull story, but said photo is the most requested one in the entire US National Archives – yes, a photo with the King of Rock ‘n’ Roll shaking hands with Tricky Dick is more popular than pictures of American troops raising a flag at Iwo Jima, Martin Luther King delivering his “I Have A Dream” speech, and other significant US historical events.

What’s the story behind this bizarre pairing of polar opposites, you may be asking internally? Well, it just so happens that director Liza Johnson and writers Joey & Hanala Sagal and Cary Elwes (yes, THAT Cary Elwes) have for you a new film that goes into a little more detail about the odd circumstances surrounding this meeting – or at least, enough to not make it seem like your average Wikipedia page.

Elvis & Nixon tells the story of how Elvis (Michael Shannon), at the height of his fame, travels to Washington D.C. with the goal of persuading the US government to assign him the coveted – and non-existent – role of “Federal Agent-at-Large” in the wake of violent protests and drug use across the country. Along with entourage members Jerry Schilling (Alex Pettyfer) and Sonny West (Johnny Knoxville), the musical icon is able to persuade White House staff including Egil Krogh (Colin Hanks) and Dwight Chaplin (Evan Peters) to coerce the Commander in Chief himself (Kevin Spacey) into sparing time for a meeting in the Oval Office, where both would eventually come into contact for a wild, officially unrecorded short amount of time together.

What could potentially throw some people off guard about this movie, as it kind of did for us too, is how Elvis & Nixon has so little of Elvis and Nixon actually together. A more accurate title would be 75% Elvis & 25% Nixon, since a lot more screen-time is dedicated to Presley’s aloof attempts to get what he wants, while Nixon doesn’t even appear that much during the first half of the film, except in all-too-brief consultation scenes in the Oval Office. While we understand that their eventual meeting was that short in real-life, that doesn’t exactly make for exciting big-screen entertainment; it’s all a bunch of build-up with hardly any satisfying resolution, which in film terms means it’s a mostly pointless experience for something that promises so much in the title alone. In fact, the biggest dramatic arc of the film doesn’t even revolve around either of them; it has more to do with whether Schilling can make it back to LA in time to meet his girlfriend’s parents. Riveting.

As for Elvis and Nixon themselves, their respective on-screen portrayals by Shannon and Spacey fail to fully convince; it’s more like watching two impersonators, one better than the other, performing off one another rather than anything. It’s odd, because Spacey – a talented impressionist in his own right – definitely SOUNDS the part, but never LOOKS the part, while Shannon LOOKS the part, but doesn’t SOUND the part. There’s something about Shannon’s naturally higher-pitched voice that doesn’t at all match the more iconic baritone vocals of the man he’s playing, and it can be extremely distracting when we’re asked to take seriously the fact that this is meant to be the real Elvis (in one scene, he runs into a pair of Elvis impersonators, who sound more authentic than Shannon does); meanwhile, Spacey certainly has the voice and even some of the physical mannerisms down to a tee, but he still just looks like Kevin Spacey doing a Nixon impersonation than actually Nixon himself. Despite fine performances by both of them regardless, they’re simply not strong enough to distract us from how off they look or sound next to the real people they’re playing.

For everything it’s promising, namely a story and scenario as ludicrous as the photo that emerged from it, Elvis & Nixon is something of a let-down that never fully materialises into something much greater. When we hear a title that implies Elvis Presley and Richard Nixon are going up against each other in a fascinating and funny clash of egos and personalities, we more or less expect something along those lines going in. Instead, it’s a very slight and inconsequential dramatization of something that despite the oddness of it was just as slight and inconsequential in real life.

It’s sometimes true what they say: a picture is worth a thousand words, in this case more than this script.

Elvis & Nixon is a slight and inconsequential dramatization of the real-life meeting between Elvis Presley and Richard Nixon, which is ultimately let down by a script that never becomes cinematic or exciting enough to justify its existence, and even Michael Shannon and Kevin Spacey aren’t convincing enough as their respective counterparts to disguise this fact.