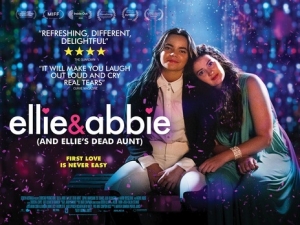 BASICALLY…: A teenage girl (Hawkshaw) receives unlikely advice from the ghost of her dead aunt (Billington) when she wants to ask another girl (Terakes) to the school formal…

We’ve all been there at some point during our youth: the school prom is coming up, there’s someone you want to ask to go with you but you’re nervous about asking them, and then all of a sudden the ghost of your dead relative comes back to give you some handy advice on how to ask them out. Okay, maybe none of us have gone through that last part, but Ellie & Abbie (& Ellie’s Dead Aunt) does a decent enough job of mirroring those initial teen anxieties and placing them in a charming coming-of-age story with a fanciful LGBTQ+-friendly twist.

The Australian film, written and directed by Monica Zanetti, follows teenager Ellie (Sophie Hawkshaw) who is quite keen to ask fellow classmate Abbie (Zoe Terakes) to the upcoming school formal. Unfortunately, Ellie doesn’t quite know the right angle from which to approach her, for she’s just barely – and abruptly – come out as gay to her mother (Marta Dusseldorp) who isn’t sure how to handle her daughter’s reveal, and like most other teens she suffers from a strong degree of awkwardness. Help does come along for Ellie, though, in the shape of her long-dead aunt Tara (Julia Billington), who’s returned from beyond the grave in ghost form as Ellie’s “fairy godmother” – emphasis on the “fairy”, as she puts it – and starts giving her niece advice on the best way to ask Abbie to the formal. Ellie, though, feels like she doesn’t exactly need the ghostly presence of her deceased relative to simply talk to her crush, but soon discovers that Tara may indeed be vital to becoming far more comfortable as an out and proud young lesbian.

Zanetti’s film serves well as not only a pleasingly simple teen comedy-drama (with a tiny hint of paranormal activity), but also as a sweet celebration of queer love across multiple generations, all under a relatable story that anyone can identify with, regardless of their sexuality. There is a fun energy that the writer and director brings to her film, which comes out through some good dialogue that can range from amusingly awkward to thematically poignant, and a number of perky performances that contribute to the shenanigans feel of the narrative (Julia Billington, as the titular dead aunt, is an endless supply of positivity). All the while, Zanetti doesn’t let the driving appeal get away from her; Ellie & Abbie (& Ellie’s Dead Aunt) is a movie that young queer people, who are discovering or already comfortable with their sexuality, can easily come to for an example of close-enough representation of realistic feelings and emotions during those teen years, while also making the story, characters and overall tone accessible to audiences who may not even identify as queer but can still enjoy those elements and more for what they are and how they are executed.

The movie follows most of the typical rom-com rules, and even hits some of the standard coming-of-age points, but it does have enough of a cheery persona to land gently even with the added weight of familiarity to parts of the story. It does take some meaningful detours, though, such as when it goes into what exactly happened to Tara and why she was killed, which do a fine job of reminding the viewer that despite the overall acceptance in this film, there are unfortunately still forces that will do anything to silence the LGBTQ+ agenda, and gives some insight into certain characters’ reluctance around people’s decisions to identify as gay or otherwise. There is a beating heart to all of this, and Zanetti does well with the limited budget that she has to emphasise her strong points without drawing too much attention to what little she and her crew could actually do in front of the camera.

Lovers of queer cinema should be easily won over by Ellie & Abbie (& Ellie’s Dead Aunt) for both its frank and upfront attitude towards young gay people and their unique wants and desires, and also the sheer universality of its story and themes that extend way beyond this niche market.

Ellie & Abbie (& Ellie’s Dead Aunt) is a charming LGBTQ+-friendly coming-of-age film that gets by with its simple and accessible – if slightly formulaic – story and characters, while also celebrating the highs and lows of young queer romance.