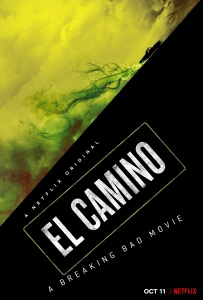 When the Breaking Bad series finale aired in 2013, everything seemed just about wrapped up. Walter White, the former schoolteacher turned meth kingpin, had completed his transformation from Mr. Chips to Scarface, and every single loose end had been taken care of, with most if not all of his business associates dead or about to die, leaving Heisenberg alone to accept the outcome of all of his actions.

That is, except for one burning question: whatever happened to Jesse Pinkman? Walter White’s former business partner was last seen laughing maniacally as he drove off in an El Camino, just having escaped captivity from a group of neo-Nazi thugs, but until now we never really knew what became of the guy. Did he turn himself in to the police? Did he go off the grid and try to lead a new, normal life? Or did he end up driving the car straight into a lamppost in a suicidal gesture?

Series creator Vince Gillian uses this as a pretty reasonable excuse to revisit the world of Breaking Bad, in a brand-new feature film that serves as a satisfying epilogue to an already epic television series, although there are times when we would have rather left certain things to our imagination.

Picking up right where the series finale left off, Jesse (played once again by Aaron Paul) is forced to lay low as the authorities start to close in on him. Initially hiding out with his friends Skinny Pete (Charles Baker) and Badger (Matt Jones), Jesse soon realises that he needs to disappear for good – but in order to do that, he needs to acquire the right resources left in the wake of everything else that’s happened, which of course is far trickier than it seems.

It is more or less an extended episode of Breaking Bad, but in this case it’s actually quite a good thing; El Camino: A Breaking Bad Movie retains the tight pacing, sophisticated visual storytelling and bleak tone that the series and its creator Vince Gilligan (who naturally writes and directs this film) perfected across the entire show, so it definitely feels that this takes place in the same universe as that, as well as spin-off prequel show Better Call Saul. Like the best episodes of both those series, El Camino truly comes to life when it focuses on the underlying tragedy of its lead character, and how they’re still trying to do good in the wake of so many bad things. Jesse Pinkman was always one of the more tragic characters on the show, going from an aloof junkie to a morally conflicted business partner and enduring many hardships along the way – the death of his girlfriend Jane from a drug overdose, being forced to coldly kill many people and watch several others (even children) die right in front of him, and his incarceration by a sadistic gang of neo-Nazis – so to see him finally get the happy ending he deserves is the light at the end of the deep, dark tunnel. Even that, though, isn’t guaranteed as the film shows that even though he’s rid of Walter White for good, he still has to fight for that chance to start over, and it’s nail-bitingly tense to see him try and work himself out of tough situations, among them dealing with a couple of aggressive thugs who are after the same hidden stash of money that Jesse is eager to find, because after everything this guy has been through you just want his path to redemption to be as smooth as possible.

Of course, this is the universe of Breaking Bad, where such things never come so easily, and it’s incredibly thrilling to revisit this world where nearly everything is intense and unbelievably stressful. Gilligan’s writing and direction remains on point, and of course Aaron Paul’s incredibly sympathetic performance is a true shining beacon, a hefty reward for those who have stuck with this character throughout the whole series. There are also a number of high-profile cameos from popular characters that show up every now and then, some of them you probably might have already deduced if you’ve heard rumours (or simply seen the cast list at the top of this review), and sometimes they tend to stop the movie dead just to remind you of how great the show was. One person worth mentioning who does show up is Robert Forster, reprising his role from the last couple of episodes in the series; of course, his passing the day after this film’s release on Netflix is a tragic coincidence, but even if he were still with us when this review was being written, it would make no difference to say that he has perhaps one or two of the most compelling and tense scenes in the whole movie. He is an actor who shall be sorely missed, but in typical fashion he left us with one last performance to go out high on.

When you think about it, this movie doesn’t feel entirely necessary – it is very much an epilogue to the show, so much so that you kind of wonder if some of it should have been left to the viewer’s imagination – but for something that didn’t exactly need to exist, it’s a damn solid coda to an already flawless show. You’ll feel glad but also stressed as hell to return to this harsh and unforgiving universe, and always feel like it’s worth it just to see one of the show’s most developed characters finally get the ending that they deserve.

El Camino: A Breaking Bad Movie serves as a satisfying epilogue to the series which at times feels like it should have just been left to the imagination of the viewer, but is made necessary thanks to typically tight writing and direction from series creator Vince Gilligan, and of course a towering performance by Aaron Paul whose blissful return to his defining on-screen persona gives Jesse Pinkman the ending that he always deserved.