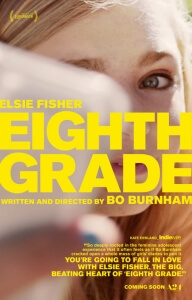 BASICALLY…: Shy and awkward adolescent Kayla (Fisher) tries to make it through her final week of middle school, before graduating to high school…

This review is of the cut shown at the Sundance Film Festival London in June 2018 – there currently isn’t a UK release date listed for this film yet, but you can expect a second review around whenever it does make it to cinemas over here.

The unofficial trilogy of awkward teenage girls making their way through their awkward lives – which is weird that it’s even a sub-genre of film to begin with – is more or less now complete. What started off with the excellent 2016 Hailee Steinfeld vehicle The Edge of Seventeen, and then morphed into Greta Gerwig’s mutli-award winning and critically-revered Lady Bird, has now evolved once more – or devolved, at least in terms of age – into comedian Bo Burnham’s filmmaking debut Eighth Grade, a movie that explores that deathly teen awkwardness right as it’s blossoming, and in the process works in a lot of laughs and painfully honest social commentary, but also a real sense of heart and an adorable nature to it that will have you falling in love with it almost instantly.

Throughout the film, we follow Kayla (Elsie Fisher), a young girl on the cusp of adolescence and just about to finish eighth grade at middle school and graduate to high school. She is also, like most Millennial pre-teens, almost completely plugged in to her phone and the world of social media, scrounging Instagram and liking other peoples’ images and videos, flicking through Twitter, and even has her own YouTube channel where she just sits in front of her laptop camera and gives meaningful advice like how to be confident. As it turns out, she could do with practising what she preaches, as at school she is incredibly shy, usually quiet (for which she even wins an end-of-year award for, in an early school-set scene), and is virtually ignored by all her fellow classmates, all of which contribute to her overwhelming insecurity about herself and personal strive for acceptance within her own age group.

That’s obviously a lot for a girl who’s barely even begun her teens to handle, and the film doesn’t sidestep any of that in favour of a few easy chortles. Part of the genius of Burnham’s script, other than being frightfully funny, is how it tackles the issue of social media having a major impact on the self-esteem of a modern kid like Kayla; though it never outright wags its finger at them, it’s clear that apps like Instagram and Facebook, where people usually post flattering images of themselves to promote a positive and attractive lifestyle, play a huge role in her life, and seeing all her friends and various other online personalities behind filters and designer clothes is clearly having some kind of negative effect on her overall well-being. She doesn’t feel like she fits in well with her more attractive classmates because in real life she doesn’t have a filter to hide behind – compared to some other girls her age, Kayla is noticeably chubby, with gappy brace-less teeth, and a face riddled with acne – and is instantly worried she’s going to be judged by how she looks by her peers instead of who she really is. It’s a sense of self-doubt a child that young shouldn’t really be carrying around at this stage in their life, and yet the huge role that social media has played in her childhood thus far has led her to become a neurotic mess prematurely. Burnham gets this point across with some very sly and underlying dialogue, as well as several instances where adult characters will painfully try and connect with their young by adopting some of their Millennial lingo (and I do mean “painfully”; a teacher dabs in front of his class for no reason, and an instructional video about the growing body openly states how such changes are “gonna be lit”; both instances, and others, are as hilariously embarrassing as you can imagine).

But while he undoubtedly has several things to say about the current lifestyle of the pre-teen crowd, and he uses his time wisely to say it all without coming across as preachy or even fully mocking it, Burnham keeps things grounded with a lead character who’s full of heart and delightful adolescent innocence. Elsie Fisher, who you may recognise as the voice of the youngest sister in the first two Despicable Me films (the “it’s so fluffy!” one), is outstanding in this film, and through a combination of her earnest performance and Burnham’s focused direction, she brings to life a character who so easily could have come across as an entitled little brat but is instead an adorable and wide-eyed scamp who’s naturally sweet, but sadly doesn’t realise it herself. As she goes through some trials and tribulations that most adolescents will be able to identify with in some way, more and more you find yourself wanting to give this young girl a hug and tell her that while her life right now kind of sucks, things will get so much better for her as she grows as a person, and she is such a likeable character that you are by her side at every turn, feeling her angst-driven teen frustrations over the most trivial of things, such as having dinner with her single father (Josh Hamilton, who’s also insanely lovable in his own naïve way) while continuing to mindlessly scroll through her phone.

It’s an unflinching portrayal of modern-day pre-adolescence, one that skewers the shallow attitudes and image-obsessed nature of kids barely old enough to see a PG-13 movie on their own, but also packs enough heart and sweet awkward charm to work as an honest coming-of-age film for young people of that age demographic. While I am itching for more people to see this film (and I truly hope it scores an official UK release date soon), I am far more curious to see what young people make of it, because something tells me this will hit them pretty hard in their still-developing emotional core.

Eighth Grade is a triumphant study of the modern-day attitudes of pre-adolescents and their endless obsession with social media, whilst also being a heartfelt and painfully honest coming-of-age dramedy held together by a sweet and likeable young protagonist played by Elsie Fisher in a true breakthrough role.