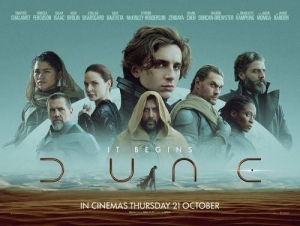 Frank Herbert’s epic sci-fi novel Dune was often considered to be among the many books deemed “unfilmable”, and if you asked directors Alejandro Jodorowsky (whose ambitious plans for a fourteen-hour film version were ultimately scrapped) and David Lynch (who has since disowned his notoriously edited-down 1984 adaptation, which has since earned cult film status), they’d give you countless reasons as to why nobody should even attempt it.

Nobody, that is, except for Denis Villeneuve, who has finally managed to figure out the most economic and impactful way to adapt such a beloved and respected piece of sci-fi literature, all while not only pleasing its long-time admirers but also being an accessible blockbuster for general audiences who don’t have time to read. The answer is, simply, to pull a Lord of the Rings and spread the story across multiple films; that way, the shudderingly complex world that Herbert originally created can be explored in ways that had never been possible in the past, and the story can be developed at a more natural pace rather than, in the case of Lynch’s film, cramming so much in that certain important elements are reduced to single lines of narration.

The important question, though, is: does it work? Well, let me put it this way: the Lord of the Rings comparison is accurate, because Denis Villeneuve’s Dune is perhaps the most intricate and detailed introduction to a certain universe and its lore since we first laid eyes on Middle-Earth. It is a visually marvellous sci-fi epic that operates on a truly grand scale, and as an exercise of world-building it is masterful stuff that, like Lord of the Rings before it, could well be seen as a go-to example in the exciting future of filmmaking.

Very early on, it is established that this is Dune: Part One, with this film only covering the first half of Herbert’s book – and man, does it pack a lot of stuff into Part One. Taking place in the far future, the powerful faction of House Atreides – ruled by Duke Leto Atreides (Oscar Isaac), his concubine Lady Jessica (Rebecca Ferguson), and their son and heir Paul (Timothée Chalamet) – is ordered by the galactic Emperor to accept stewardship of the desert planet Arrakis, which is home to a valuable substance known as “spice” that can power interstellar travel. Paul, meanwhile, is being plagued by strange visions of a woman named Chani (Zendaya), who appears to belong to the clan of blue-eyed Arrakis natives known as the Fremen, and he is further drawn to the complicated political struggle between the oppressed Fremen and the brutal might of their former overseers, the sinister House Harkonnen overseen by the slimy Baron (Stellan Skarsgård), upon his and his family’s arrival on the planet.

That doesn’t even cover half of the plot in this first-half of an adaptation, which includes so much else that it’d be hard to sum it all up in one spoiler-free paragraph – know that there are witch-like female sects, major betrayals, giant sandworms, and a prophecy pertaining to what is essentially space Jesus all in there somewhere (and I apologise to any die-hard fans of the novel for over-simplifying some of these terms, but you have to admit it’s a little funny watching a Dune novice like myself try and make sense of it all at face value). Amazingly, though, Villeneuve – who also co-wrote the script with Jon Spaihts and Eric Roth – manages to pace it all accordingly, allowing enough time to focus on one aspect at a time so that the viewer can understand enough before moving on to the next important thing. It is a very exposition-heavy script, but given that the job of this film is to introduce this heavily complicated world to those unfamiliar with the source material, it is absolutely necessary that most of the dialogue has to do with explaining how certain things work. Villeneuve is such a visceral and vibrant filmmaker that he even finds a way to make the consistent exposition feel grand and epic, along with cinematographer Greig Fraser who makes this universe look neatly grimy and lived-in, akin to the aesthetic of the original Star Wars trilogy. They bring pure thrills to the visuals of this movie, which are absolutely breath-taking to watch at the best of times.

This universe in and of itself is very interesting to explore, from the minor technical details to the politics happening in the background. Intriguingly, this is a future where technology is mostly just limited to spacecraft, including cool-looking dragonfly helicopters, and most of everything else is pleasantly analogue and more practical (it’s fun seeing how, even in the far future, there is still such a thing as bagpipe players). Meanwhile, you have enough competing factions and warlords to rival a standard episode of Game of Thrones, complete with a grotesque floating evil Baron that Stellan Skarsgård is having fun with in his fatsuit, and a big explosive battle scene that is gritty and expertly handled by the filmmakers. It’s all enough to make you really buy this universe, and the vast ways in which Villeneuve and his crew have been able to bring it to life for book fans and audiences everywhere. The cast is also good at giving life into characters which often do get sidelined in favour of the advancing plot, but the moments that they are given do make them more rounded and interesting than on paper; great actors like Timothée Chalamet, Oscar Isaac and Rebecca Ferguson comfortably lead the ensemble, standouts of which include Josh Brolin as the gruff general Gurney, and Jason Momoa who has some of the brightest moments as the spectacularly-named hero Duncan Idaho.

While the world-building in Dune: Part One is expansive and impressively handled, it is important to remember that this is still Part One of a much larger story, and to that extent there isn’t what you’d call a traditional resolution in this film. Most fans of the book will probably be able to figure out where things will be left off until Dune: Part Two arrives (which has yet to be greenlit, and really does depend on this film’s financial success), but for unfamiliar audiences the ending may seem a little abrupt, in a film that has already thrown the three-act structure out the window. However, as long as everything you’ve seen up to this point has engrossed you fully, the “leave ‘em wanting more” attitude that this film adopts should make anyone who watches this film extremely excited for a follow-up which desperately needs to happen. After all, taking into account how masterfully this first part has turned out, just imagine what could be in store for the next one?

No matter what, it seems like Dune – after so many years of trying – is here to say in the cinema consciousness.

Dune is a masterfully constructed first-half of Frank Herbert’s epic sci-fi novel, introducing audiences to a vast and expansive universe that is rich with detail and lore, and setting itself up for even greater accomplishments in the yet-to-be-filmed – and we hope to space Jesus it is made – second part.

Dune is now showing in cinemas nationwide – click here to find a screening near you!