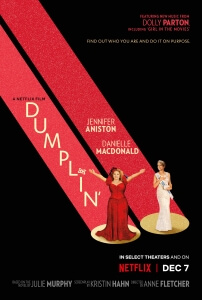 BASICALLY…: Willowdean (Macdonald), the plus-size teenage daughter of a beauty queen (Aniston), defies expectations by entering into her local pageant…

Though she herself never shows up in Dumplin’, Dolly Parton is at the very centre of this Netflix adaptation of the Julie Murphy novel. It not only features classic songs from the country singer’s eclectic music library on the soundtrack (as well as a couple of specially-written ballads), but Parton herself is looked upon by characters as a legend among legends, the role model that they aspire to be whilst on their own paths in life. In many ways, Dumplin’ is a Dolly Parton vanity project where Parton never physically appears, but luckily enough it’s actually a pretty decent one.

Directed by Anne Fletcher – whose previous film Hot Pursuit looks even worse compared to this far more competent stab at filmmaking – Dumplin’ is the story of Willowdean Dickson (Danielle Macdonald), the plus-size teenage daughter of former beauty queen Rosie Dickson (Jennifer Aniston) who, despite her mother’s thoughtless self-absorption and obsession with traditional beauty, is a strong-willed and sharp-minded young adult who misses her late beloved aunt dearly. When she finds out that her aunt once had dreams to enter the quiet Texas town’s beauty pageant, Willowdean – along with her best friend Ellen (Odeya Rush) and fellow outcasts Mille (Maddie Baillio) and Hannah (Bex Taylor-Klaus) – enters herself into the pageant, largely to go against the expectations of her mother and the very definition of beauty, but comes out with a newfound sense of confidence and direction she didn’t have before.

An underdog story in the most crowd-pleasing of ways, this is a likeable if familiar story of self-acceptance and going against what is considered normal. It has a very sweet nature to it, anchored by a very competent lead performance by Danielle Macdonald who, as she did with her previous breakout role in Patti Cake$, brings her character a fun and enjoyable jolt of energy that positions her as a serious future star. You’re on board with this character even as she’s facing some troubling insecurities, like an aspiring handsome love interest who she cannot fathom why he is smitten with her over thinner, more conventionally attractive girls, and sometimes being almost as shallow-minded as her mother when it comes to the needs and wants of those closest to her. She goes through a nice little arc in the film that’s not just going through the motions with this beauty pageant, and she gets some strong support along the way as well, particularly by Jennifer Aniston who’s clearly having a lot of fun chewing part of the scenery, but never letting her overall performance be so one-dimensional that it’s almost cartoonish. Aniston doesn’t often get enough credit for her skills as a performer, mainly because she sometimes does tend to just be Rachel Green from Friends again for most of her film roles, but she’s rather enjoyable in a generous supporting part that lets her play around with her identifiable screen persona a little bit.

But going back to Dolly Parton, her music is what keeps this movie afloat most of the time, to a point where you could see this easily existing on the stage as a Parton jukebox musical in the same vein as Mamma Mia! or We Will Rock You. All the Parton classics are here, from “9 to 5” to “Jolene” to “Two Doors Down”, and a couple of new ones including the newly Golden Globe-nominated “Girl in the Movies” which plays over the end credits, which will immediately make it a must-see (or must-listen) for any fan of the Tennessee singer. Her presence in the movie is more than felt, even though again she never physically appears in the movie – not even a cameo as herself, surprisingly – as characters will worship her as their living idol and role model. She and her music serve as part of the film’s identity in a positive way, because her songs are so upbeat and passionate that they help guide the story and its characters along an emotional and sweet personal ride, not to mention empowering in a plot that focuses heavily on the self-esteem of this young woman. It’s a soundtrack that’s bound to delight Parton fans from all walks of life, and it’s a fitting companion to a sweet and enjoyable movie like this one.

There’s a fair amount to like about this movie, though I would be lying if I said this was a film that completely rewrote the rulebook for this kind of movie, which it really doesn’t. As light-hearted and enjoyable as Dumplin’ is, I can easily see some people being put off by how familiar its plot feels half the time; it really is this same kind of underdog story you’ve seen many times over, only here it’s different because it involves beauty pageants. You know the plot beats that it’s going to hit along the way, and more often than not your predictions will be entirely correct, so there aren’t that many surprises as we creep further and further into the climax. However, with that being said, this does have a good enough execution behind it with Fletcher’s assured direction and a heartfelt screenplay by Kristin Hahn, as well as a strong cast that really bring their characters to vivid and enjoyable life without going too far over the top, and not to mention a bopping soundtrack that’s filled to the brim with Dolly Parton classics that fans will be dancing to all the night long.

Sure, it doesn’t reinvent the wheel by any stretch of the imagination, but it gets by just well enough with all those things I just mentioned, and it’s worth looking up on Netflix if you want a feel-good crowd-pleaser that you can watch from the comfort of your own home, as it’s got a pumping heart that’s twice as big as the plus-size main character.

Dumplin’ is a familiar but likeable underdog story that’s boosted by fun and competent performances by lead Danielle Macdonald and Jennifer Aniston, and an upbeat Dolly Parton soundtrack that helps the movie coast through the more recognisable plot beats and gives it a big beating heart of its very own.