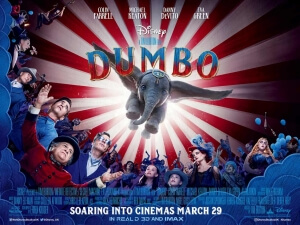 BASICALLY…: A baby elephant is born with oversized ears, which gives it the ability to fly…

I’m usually an apologist for the majority of Disney’s live-action remakes; some of them I didn’t much care for, and others I just thought were okay, but the ones that worked like The Jungle Book and Mary Poppins Returns I thought really worked, so unlike a lot of other people I shun cynicism and go into them with a hint of optimism and an open mind.

However, I can’t bring myself to say many good things about their latest take on Dumbo; watching it, I just felt nothing, accomplished nothing, and sensed no real passion or emotion behind any part of it. It is a depressingly hollow, unnervingly lifeless, and endlessly bland corporate product, and I say that as someone who didn’t hate their recent version of Beauty and the Beast.

To put it forward before we continue, I have fond memories of watching the original Dumbo as a child, though I never considered it to be one of my absolute favourites growing up. I mostly just remember it being cute and colourful, and sometimes even surreal like that infamous Pink Elephants on Parade sequence, but nothing too substantial or heavy as some of their later work. It’s also one of their shortest features, at 64 minutes long, so the idea of translating it into a longer epic with more things happening is not a bad idea in theory.

The problem is, that the resulting movie somehow feels emptier and less substantial than the original, making it an even bigger waste of a golden opportunity.

It’s a film comprised of two movies; the first more or less plays out like the original, with baby elephant Dumbo – an admittedly adorable CGI creation – being born with oversized ears and immediately becoming an outcast in the circus he and his mother belong to, only to then wow them all with his surprising ability to fly. Of course, there are additions to the cast, including the circus’s owner Max Medici (Danny DeVito), one-armed war veteran Holt Farrier (Colin Farrell) and his two young children Milly and Joe (Nico Parker and Finley Hobbins respectively), and they are the ones to often bounce off of the dialogue-free title character during this first half of the film. The second half, which is where it becomes another film entirely, begins when entrepreneur V. A. Vandevere (Michael Keaton) buys up Medici’s circus and transfers Dumbo and the entire troupe to his big corporate theme park Dreamland, where the flying elephant is built up as the park’s biggest new attraction, only for things to – of course – not be as they seem.

Tim Burton is an inspired choice to direct a live-action version of Dumbo, and there are times in the film where his trademark visuals do seep their way into the sets and costumes, but for the majority of this film it really doesn’t feel like Burton actually directed this, given how bland, uninteresting and one-dimensional everything from the aesthetic to the characters ends up feeling. Say what you will about his last live-action Disney outing Alice in Wonderland, but you could absolutely tell that it was a Tim Burton movie just by looking at it; here, you could put any director’s name in front of this and it would look and feel exactly the same, that’s how hollow and dull this film ends up being. Most of the time, you’re wondering if Burton was ever even enthusiastic about making this film, because he makes everything feel so lifeless and fake that it could only come from someone whose heart just wasn’t into it; as a result, the direction he gives to his actors sucks even more life out of the story, including Colin Farrell who seems to have just been given the task of imitating Matthew McConaughey all the way through, and young Parker and Hobbins who both turn in a couple of very robotic and unemotional performances that make the CGI elephant seem more human. Burton even wastes a perfectly good Batman Returns reunion between Keaton and DeVito, with the former seeming to have been asked to play his role like an awkward mix between that film’s Max Shreck and Walt Disney, and the latter waltzing around most of the time just being Danny DeVito but in a ringmaster’s uniform.

Though Burton’s lifeless direction proves a disappointment, it’s ultimately Ehren Krueger’s script that really brings this whole movie down. Go figure, the guy who wrote three Transformers movies ended up writing something that’s both really long and really stupid; at 130 minutes it’s way longer than a remake of a 64-minute movie ever needed to be, and it’s padded with a thin story and characters that say and do things that make very little sense, along with some groan-worthy jokes that would certainly have ended up in one of Michael Bay’s Transformers movies if he was given the opportunity – Dumbo is introduced in Keaton’s circus by, of all people, legendary ring announcer Michael Buffer, who actually says “Let’s get ready for Dumbo!” just to hammer in the stupidity.

It doesn’t work as a reimagining because a lot of what is added really doesn’t work on its own merits, and the references it does make towards the original are either shoehorned in for no reason, or drained of all emotional weight. The Pink Elephants sequence is in the film – albeit under wildly different circumstances; no baby elephants get drunk in this one – but is not only over and done with quickly, but the whole movie stops dead in its tracks just so it can show it in all its CGI awkwardness. Meanwhile, the “Baby Mine” scene that everybody remembers and has at one point in their lives cried to is done here with zero empathy and not even a fraction near as heart-breaking as it was in the original; this scene actually sums up the whole movie, because what is clearly meant to be genuine and tearful is now reduced to a hollow, emotionless afterthought.

It’s a disappointment for those hoping this movie would buck the trend of Disney’s live-action remakes all being so redundant, because while it is noticeably different from the original Dumbo, what they added is so uninteresting and depressingly workmanlike that it’s not worthy of the flying elephant’s magical abilities.

Dumbo is a disappointingly hollow remake of Disney’s classic animated film, with director Tim Burton’s lifeless and awkward direction partnering with Ehren Krueger’s stupid and nonsensical script to create an uninspired mess that’s not worthy of the adorable flying elephant’s magic and charm.