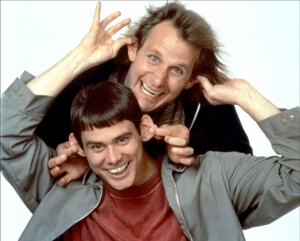 At last, after what feels like an eternity of false starts and prequels that should never, ever be mentioned by the human population, production on the sequel to the 1994 comedy Dumb and Dumber is imminent, and some new casting choices have been revealed!

Dumb and Dumber To – that’s not a typo, that’s the actual title – will see Jim Carrey and Jeff Daniels return as Lloyd Christmas and Harry Dunne respectively, with writer/directors Peter and Bobby Farrelly back in the directors’ chairs. What’s more, the Farrelly Brothers have taken to Twitter to announce a couple of new additions.

Kathleen Turner (Romancing The Stone) has come on board as Fraida Felcher, a character who the filmmakers describe as “the legendary hose-hound from Cranston!” Fans of the original film will recognise the name from a scene where Harry reveals he slept with Felcher, described as “a babe who worked for the tractor company”, before she dumped him one week later. Could this fuel the rumoured storyline of the men going out to search for a long-lost son? If so, poor kid.

Meanwhile, another returning cast member is revealed as Brady Bluhm, better known to fans as Billy in (Apartment) 4C, a blind neighbour kid to whom Harry and Lloyd sold their headless bird, Petey.

In time for the original’s 20th anniversary, Dumb and Dumber To is scheduled for release next year.

By Jack Martin|September 1st, 2013|News|Comments Off on Dumb and Dumber To Adds New Cast Members