Drunk Bus (Review) – All Aboard The Pineapple Express 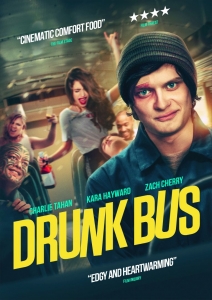 God bless the designated drivers of the world, the people whose literal job is to take care of those way too drunk to get behind the wheel, and make sure they all get home safe and sound after a night out. In Drunk Bus, the feature directorial debut of both John Carlucci and Brandon LaGanke, the role of the designated driver is very much on full display, in all its inane and borderline numbing whole, but in this case it also paves the way for a decent coming-of-age story that contains enough of a feel-good factor to overlook its more generic nature.

Originally set to debut at last year’s cancelled SXSW Festival – the same event that had previously launched the theatrical campaigns of audience-favourite hits like The Peanut Butter Falcon and A Quiet Place – Drunk Bus clearly tends to fall in that same crowd-pleasing vicinity, and given its plot you can kind of see the appeal. Set in the early 2000s, we follow young graduate Michael (Charlie Tahan) who has now taken a job as a night-time campus bus driver at his former college, having had his plans for a life with his girlfriend Amy (Sarah Mezzanotte) scuppered when she unceremoniously dumps him. Michael’s nights are exceedingly repetitive, picking up plenty of hard-partying students along his route, having eggs thrown at his windshield by rowdy frat boys, and picking up a seemingly cantankerous old man named “Fuck You Bob” (named after the one phrase he always seems to utter) who’s always blocking Michael’s way with his wheelchair; aside from a couple of regular passengers like Kat (Kara Hayward) and Justin (Tonatiuh Elizarraraz), Michael’s essentially has very little social life and feels stuck in his dead-end, unfulfilling job.

Things begin to look up, though, when Michael is assigned a new bodyguard after an altercation with an obnoxiously smug student leaves him with a black eye. Enter Pineapple (Pineapple Tangaroa), a hulking Samoan with huge facial tattoos and piercings whose carefree, spontaneous attitude contrasts greatly with Michael’s much more timid, less confident persona, and it is through Pineapple’s unexpected wisdom and guidance that Michael finally begins to set himself a ton of higher life goals. In fact, Pineapple doesn’t just step in to take control of the situation, he also pretty much walks away with the entire movie, as both Pineapples (character and actor) are hugely entertaining, playing up the physical intimidation while also coming across as the coolest guy you’d ever want to spend a journey on a drunk bus with. He has very good chemistry with lead Charlie Tahan, the one who’s been granted the coming-of-age arc here and pulls off his character’s initial awkwardness while also still making him likeable enough to root for. The two of them have some strong, poignant scenes together which is where a bulk of the film’s unexpected heart comes from, and it’s hard not to be in some way charmed by the misadventures they get themselves into, from stealing booze from a local store to getting high with a strange drug dealer with an even stranger fascination for the band Devo.

There are a few decent laughs scattered throughout, most of them courtesy of writer Chris Molinaro’s reasonably smart script that, unlike a raunchier teen sex comedy like American Pie or Van Wilder: Party Liaison, keeps the more juvenile gags to an absolute minimum (save for an early poop joke which really does feel like it came from one of those movies) and focuses more on the slightly more mature drama at play. It isn’t a laugh-a-minute movie, and it is sticking to a formula that’s very familiar and lets you know well in advance what some of the next major plot points are going to be – a romantic sub-plot, for instance, feels rather shoehorned in when it didn’t exactly need to be there in the first place – but they’re amusing enough to hold your interest all the same. Directors John Carlucci and Brandon LaGanke also do a fine job of keeping a consistent enough tone that makes certain dramatic developments feel like they belong in the same universe without coming across as too out-of-place, which is extra impressive given that this is their first time directing a feature film.

The plot won’t win any awards for originality – although a clever kissing gag nearer the end of the movie is a particularly nice touch – but Drunk Bus is a fun film that revels in the mundane and gives a sweet, natural coming-of-age story that should resonate well with audiences. It’s not the kind of film that’ll make you want to party all night, but will at the very least give you a newfound respect for all of the designated drivers out there, who have to put up with everyone’s drunken antics all night long and rarely get the respect they deserve.

Drunk Bus is a fun and sweet coming-of-age drama which has some decent laughs, entertaining characters – especially show-stealer Pineapple Tangaroa – and enough charm to overcome some of its more familiar plot points.

Drunk Bus is now available to rent or buy on digital platforms, including Amazon Prime Video.