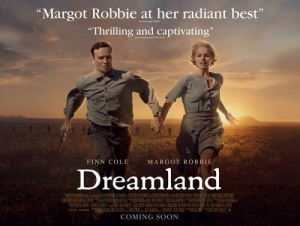 BASICALLY…: In Depression-era Texas, a young man (Cole) is drawn to a fugitive bank robber (Robbie) whom he helps hide…

No real Depression-era gangsters or bank robbers are ever depicted in Miles Joris-Peyrafitte’s ambitious second feature – following his debut As You Are, which received strong acclaim at Sundance – but the intrigue and easy appeal towards true figures like Bonnie and Clyde, Al Capone and John Dillinger is very easy to spot.

In Joris-Peyrafitte’s Dreamland, which delivers a stylish flare to the watchable drama, we see how easy it may have been for anyone of that time period to be swept up into a criminal way of life, from the economic dead-zones they constantly found themselves in, to the adrenalin-fuelled rush one gets by going against societal norms and taking what you feel you are owed. Of course, none of it is on the right path to head down, but the film doesn’t make it hard to see why someone would be drawn towards it, especially when the main attraction is the beautiful movie-star presence of lead actress and producer Margot Robbie.

Taking place in a small, dry town in 1930s Texas, a young man named Eugene (Finn Cole) feels stuck at his family farmland home, going nowhere in life and still dreaming about places beyond the horizon. His dad having left when he was young, Eugene one day aspires to head to the Gulf of Mexico to track him down, but for now he has to put up with his overbearing stepfather, who happens to be local deputy sheriff George (Travis Fimmell), as well as his curious young half-sister Phoebe (Darby Camp). Eugene soon learns that the wanted bank robber Allison Wells (Robbie) has a $10,000 bounty on her head, which would help his family farm out in an economy that’s as dry as their fields; but in an even more surprising development, Eugene finds Allison herself hiding out in his barn, badly wounded from a bullet in her leg. Against his better judgement, and convinced of Allison’s innocence when it comes to some of her deadlier charges, Eugene agrees to help her escape and start a new life, but not before he can shake off his stepfather’s prying investigation into her whereabouts.

Joris-Peyrafitte’s film is a handsome one, elevated by some pretty cinematography by Lyle Vincent who occasionally alternates between sweeping widescreen and anachronistic 8mm footage (the latter primarily used for fantasy/dream sequences about a life beyond the current Texas landscape) for a visually arresting compilation of stellar shots. The director – soon to reunite with producer Margot Robbie on their upcoming Tank Girl reboot – has an old-fashioned approach to the narrative (via Nicolaas Zwart’s simple yet enticing script) which gives way to a handful of classic Hollywood movie traditions, from the young dreamer lead character to the reminiscent narration – provided by Lola Kirke, as the older version of Darby Camp’s character – but done in a fresh and revisionist sense that feels applicable and digestible for a modern audience. He will incorporate some steady one-shot takes of bank robberies or simply walking through a house, all done gracefully and impressively enough while not distracting from the story and characters that the film wants us to focus on.

Finn Cole’s highly applaudable lead turn as young Eugene nicely compliments the always-reliable Margot Robbie’s glamorous presence, and the two have a nice chemistry that feels authentic and believable enough for you to buy why someone like Eugene would be so easily drawn to an outlandish criminal like her. You feel his growing desire for her as he continuously takes matters into his own hands, which the actor conveys with boyish charm and reasonable restraint, while she exhumes plenty of charisma and wide-eyed enticement, even in shots where she’s not entirely visible (a late tub scene is an interesting composition of slow zooms and blocking, yet her presence is felt in her emotional voice just off-camera).

It’s not a film that requires repeat viewings – it’s a simple enough tale, told competently and with a satisfying payoff, but there isn’t much to dig deep into when you really start to analyse it – although its handsome and watchable qualities do make it a decent film to at least sit down and relax in front of. The presence of Margot Robbie just makes that experience a lot more attractive.

Dreamland is out now in cinemas across the UK.