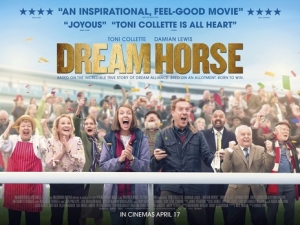 BASICALLY…: A small Welsh community adopts and raises a race horse named Dream Alliance, which goes on to compete in the Welsh Grand National…

It’s all well and good that cinemas are back up and running with popular hits like Peter Rabbit 2, A Quiet Place Part 2 and Cruella now playing, but it isn’t truly the return of the big screen unless there’s a pure feel-good option to play right alongside those other movies. That slot now goes to Dream Horse, originally scheduled for a release in April 2020 before, well, 2020 happened, and comes at a time when audiences, still nervous about the current direction of the pandemic-ridden world, need something to cheer on and leave with a big ol’ grin across their faces.

In those respects, Dream Horse fits the bill nicely; a positive, endearing and rather charming crowd-pleaser, the film certainly doesn’t stray too far away from the usual tropes of the inspirational horse-racing movie, but as a tale of community and overcoming the odds, it’s a wholly pleasant movie to make plans to see.

Directed by Welsh filmmaker Euros Lyn, known for directing a handful of episodes for Doctor Who, Sherlock, Broadchurch and Black Mirror, the film appropriately takes place in a small, quiet village in Wales, where several shops have been boarded up and horses just roam freely on the streets. One of the residents is Jan (Toni Collette), an unfulfilled woman working a dead-end job at the local supermarket, and tending to her virtually useless husband Brian (Owen Teale) who just sits around watching animal programmes all day. During a shift at the local community pub, Jan overhears tax accountant and horse-racing enthusiast Howard (Damian Lewis) bragging to his friends about the newest steeds dominating the racecourse, which inspires Jan – herself an animal enthusiast – to put plans in motion to breed and train a racehorse. Along with other members of the community, they scupper enough money together to impregnate a filly and have it birth a sturdy foal, which they name Dream Alliance, and after rigorous training the horse is ready to go to the races, much to the delight of the reinvigorated community who supports their stallion all the way to the Welsh Grand National.

Going into a movie like Dream Horse, you expect to see it hit many of the familiar plot beats exclusive to the horse-centric sports movie (whether it’s Seabiscuit or Secretariat or even that long-forgotten Dreamer movie starring Kurt Russell and Dakota Fanning), and it more or less does. Everything you can imagine for this type of film is here, from the underdog narrative to the snooty fellow horse owners – represented by former Doctor Who star Peter Davison in a handful of scenes – to crowds of people gathering around the TV in public places hoping for their local champion to win. Is it formulaic? Sure. Is it predictable? Absolutely. But Dream Horse manages to make its abundance of tropes work to an impossibly charming degree, with director Lyn emphasising the community aspect of this story and sculpting it as an inspiring tale of these locals all coming together for a shared cause, not for any financial gain but because they want to be part of something greater than they’re currently living. It’s easy to root for these people because you can see their passion for their horse and its racing abilities shining through their everyday mediocrities, and when they all get together to discuss several aspects of their prized steed you can tell that they’re coming alive in ways that they haven’t done for years. Winning performances from the likes of Toni Collette, Damian Lewis and Owen Teale certainly help, but Lyn is smart enough to also give the audience enough reason to care about these people caring so greatly about their racehorse.

Lyn even manages to find ways in which you’re left surprised by a number of the familiar clichés, a difficult feat for any filmmaker working with such material and even more impressive when you find yourself not knowing what’s going to happen in a story you already know the outcome of. There are some major incidents around the second-act break which do leave you on your toes a little bit, and under lesser filmmaking and writing these moments would probably play out exactly how you would imagine them to. However, by that point, the script has already done a good enough job at making these characters so likeable and human, and the direction has really done a fine job of emphasising their enthusiasm and community spirit, that you’re still emotionally invested and eager to find out what steps it’s about to take, even though by that point you have already sussed out what the overall endgame is. Granted, Dream Horse never revolutionises any of its tropes or does anything spectacularly new with them, but as with most movies relying heavily on formula, it’s all in the execution, and it’s a well-made enough movie to really hook you in and revel in the joy and passion that you get from other movies like this one.

The movie certainly won’t win any awards for originality, but it does rejuvenate that truly feel-good energy that has been sorely missed in cinemas over the past year-and-a-bit. It’s nice to have movies back on the big screen in general, but ones like Dream Horse are especially welcome, because while there is a risk of them being completely overshadowed by much bigger and more original blockbusters, audiences need movies like this to just simply make them smile and cheer, with nice characters and a familiar but reliable narrative. Of course, I don’t see this doing nearly as well as something like A Quiet Place Part 2, but as a smaller, much more accessible alternative, I think that this will be completely serviceable to anyone who wants to return to the cinema and come out with a fresh reminder of all the magic and positivity that the movies can bring.

Those people will perhaps get the biggest kick out of Dream Horse, a movie with enough charm and likeability to see it over the finish line.

Dream Horse is a charming and uplifting crowd-pleaser which dramatizes the community spirit and infectious passion of the Welsh committee behind winning racehorse Dream Alliance with sheer likeability, overcoming its familiar structure and even finding ways to keep you invested despite the recognisable horse-centric sports movie tropes.

Dream Horse is now showing in cinemas nationwide – find a screening near you right here!