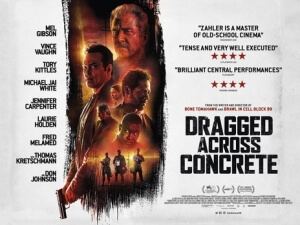 BASICALLY…: Two suspended cops (Gibson and Vaughn) decide to use their criminal connections to secure themselves enough money until they return to the force…

I have a feeling that after seeing Dragged Across Concrete, all those people on Twitter calling Green Book a “problematic” and “misguided” look at racism and brutality (for the record, none of those are my feelings towards that film) will want to apologise unreservedly to the Oscar-winner.

This is a film that feels specifically designed to trigger certain online demographics with its extreme violence, uncomfortable depictions of women and minorities, and its overall nasty attitude that takes its sweet time to fully unfold; on the one hand, I kind of respect writer-director S. Craig Zahler for going all out with this film, his third overall, while refusing to give in to certain demands to potentially make it more accessible to audiences, but on the other hand it’s largely just used for shock value which serves to only stretch the story out far longer than it ever needed to be, leaving it an unfocused and rather unpleasant experience overall.

Primarily, the movie is about two police officers, Brett Ridgeman (Mel Gibson) and his younger partner Anthony Lurasetti (Vince Vaughn), who are caught on camera inflicting police brutality on a non-white criminal during a drug raid, and are suspended from the force without pay as a result. Although the suspension is only for six weeks, not to mention that it’s made pretty clear from their superior (Don Johnson) that it’s all just to appease the media and they’ll likely be welcomed back soon enough, Ridgeman decides anyway to use the criminal connections he’s made on the job to learn about any upcoming scores by criminals, so he and Lurasetti can rob them afterwards and use the valuables as compensation. Both Ridgeman and Lurasetti have strong reasons for doing what they want to do – the former wants to look after his wife who has multiple sclerosis (The Walking Dead’s Laurie Holden) and his teenage daughter who’s being harassed by the coloured teens in their neighbourhood, and the latter wants to afford a nice engagement ring for his girlfriend (Tattiawna Jones) – but the further they dive into the deep, dark web of crime, the grislier the situation eventually becomes. For a while, we also follow around recently-released convict Henry (Tony Kittles) who plays a major role later in the film’s third act, and a nerve-struck bank teller (Jennifer Carpenter) that also plays a role in later events, albeit in a less desirable manner.

A lot of this film feels like Zahler wanted to make a film that could have easily come out around the mid to late 90s immediately following the success of Pulp Fiction, and although it certainly has the ambition and scope of Quentin Tarantino’s early masterpiece it also can’t seem to hit all the targets that the other movie easily could. For one, the script is written in a rather stylised, over-written format complete with long-winded dialogue and lengthy, almost entirely unnecessary, plot tangents that could have easily been trimmed down if not removed entirely. It certainly seems like Zahler was aiming for Tarantino-esque results with this film, especially with its pompous dialogue, occasionally quirky sense of humour and its sudden bursts of extreme violence, but it’s so shrouded in moody cynicism and bleak, uncomfortable views of the world that it often lacks the truly engaging and oddball heart of Tarantino’s filmography. It’s not a movie you’d want to go to in order to feel happy; it’s a cold, brutish and unpleasant antithesis that delights in its characters’ frequent nastiness and never really calls them out on it, leaving a sour taste in your mouth as you watch it.

Again, though, part of me wants to respect Zahler for really not holding back on the brutishness of it all; from what I have heard about his previous two movies – the Western/cannibal movie hybrid Bone Tomahawk, and the grisly prison thriller Brawl in Cell Block 99 – they also don’t shy away from showing some truly grisly depictions of extreme violence, and neither does Dragged Across Concrete which perhaps doesn’t contain as much gore as the others, but when it shows up it’s pretty rough (just wait till you see what happens when a character swallows a key). The guy does seem to be a skilled filmmaker, and he’s able to get some fine performances out of his cast – say whatever you like about Mel Gibson, but the guy can still carry a movie perfectly well – but this doesn’t seem to be one of his finest outings, just from how tedious and overwritten some of the dialogue is, how detestable a lot of the characters and themes are, and how it is punishingly long to sit through, at over two-and-a-half hours. Regarding the latter, there’s nothing wrong with a crime movie taking its sweet time to fully unfold (classics of the genre like The Godfather and Heat are both pushing three hours), but it needs to actually be engaging for the audience to care about what’s happening, and unfortunately there’s not really any one character or any one part of this rather thin story that’s interesting enough to carry itself. Because of that, the movie quickly outstays its welcome and you constantly finding yourself losing patience with its slow-burn pacing that really has no reason for being so.

Maybe it’s just because this kind of dour and cynical crime story really isn’t my thing, but I honestly don’t think I’d recommend this movie to many people. If you are into these sorts of movies then you will probably get more out of it than I could, and more power to you if it does; for me, though, it really did feel like a huge drag.

Dragged Across Concrete is a dour and moody crime epic that lacks true enjoyment thanks to its overlong running time, its zero amount of likeability, and its tendency to rely on shock cases of extreme violence just to retain any kind of interest from its audience.

Check out Dragged Across Concrete showtimes in London
on Walloh.