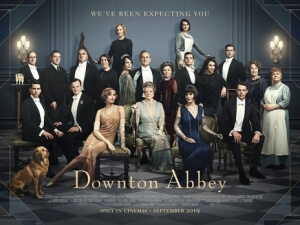 BASICALLY…: The estate of Downton Abbey, including the Crawley family and their staff, prepares for a visit from the King and Queen…

The ITV (or PBS, if you’re Stateside) period drama Downton Abbey was massively popular with audiences around the world during its six-season run, although there were some who either didn’t get as into it as much as others, or just never really watched any of it. I fall into the latter category; despite it dominating the pop culture zeitgeist at the time, I never found the time to sit down and actually watch the show from beginning to end, so I only know of the Crawley family’s exploits through hearsay from people that couldn’t stop raving about it.

Naturally, whenever there is a movie coming out that’s based on a popular TV show which I didn’t see a single episode of, there is slight trepidation on my part as I know that I’m not the target audience – i.e. somebody that’s actually seen it – and the movie could potentially alienate audience members such as myself who aren’t familiar with this story or these characters. To my surprise, even though I have only just met these characters for the very first time, I could easily tell who everyone was and what was happening, and it made the experience a shockingly pleasing one for someone who up until now was not familiar with this universe. (On that note, if I happen to fumble characters’ names or certain plots that may have happened during the series, then feel free to call me out for the newbie that I am.)

Taking place in 1927, the estate of Downton Abbey – presided over by the wealthy Crawley family, including Hugh Bonneville’s Robert Crawley, Michelle Dockery’s Lady Mary, and Maggie Smith as the show’s MVP, sharp-tongued Lady Violet – receive word from Buckingham Palace that King George V (David Haig) and Queen Mary (Geraldine James) intend to visit during their tour of the country. The news sends everyone into overdrive, especially the estate’s various staff from maid Anna Bates (Joanne Froggatt) to kitchen chef Mrs Patmore (Lesley Nicol), to a point to where retired butler Mr. Carson (Jim Carter) is even brought back into the fold to oversee preparations. However, the royal staff soon show up in advance of Their Majesties and practically render the Downton staff all but useless, leading to a revolt to restore the estate’s honour. Meanwhile, the Crawleys have their own share of obstacles; Lady Mary is struggling to keep the estate’s affairs afloat, son-in-law Tom (Allen Leech) is approached by a mysterious stranger (Stephen Campbell Moore), and Lady Violet is forced to reconcile with estranged cousin Lady Bagshaw (Imelda Staunton) who has arrived with her maid Lucy (Tuppence Middleton), who Tom becomes taken with.

Honestly, if I was to just make a list of all the plots going on in this film, it would go on for way longer than any other review I’ve done for this website. There are sub-plots left and right, up and down, practically everywhere in this movie, and from what little I do understand about the show that’s kind of how it was, just this giant soap opera with nice dresses and sharp suits. While there is a lot going on – and quite frankly, I’m amazed that it’s all crammed into this two-hour movie – it’s surprisingly not that complicated to follow, and I think a major reason for that is because, honestly, it’s quite fun to watch. Sometimes it can get a little cheesy and go on for longer than it ever needed to, but I was enjoying watching these characters work off one another, each of them with their own defined personality as well as being very likeable in unique ways, and I found Julian Fellowes’ writing to be so sharp and witty in that amusing British sort of way (Maggie Smith, of course, steals every scene in this movie with her frivolous one-liners and no-nonsense attitude) that eventually I stopped worrying about feeling left out, because it was gleefully inviting everyone – whether they had seen the show or not – into its warm, charmingly inoffensive arms. Seriously, it leaves me curious enough to actually go back and watch the entire series from the start, especially if the show is as entertaining to watch as this movie is.

From this movie alone, I can absolutely see the appeal of Downton Abbey, and even why some people wouldn’t like it as much – some of the plots can get ridiculous and a little contrived, such as an assassination plot that just comes and goes, and certain reveals about characters’ parentage that feel like they’ve come straight from a melodrama Spanish telenovela – but whether you’re a fan or not, there is something genuinely sweet about its nature that’s hard to overlook. The way it ends, I did find myself leaving with a pleasant smile on my face, because I felt like I had just spent a nice time with interesting people that I had only just met for the first time, and would be open to spending a little more time with them in the future.

Those more familiar with the series will undoubtedly love it, and those who were never really all that into it in the first place won’t be won over here, but for novices who are going into this movie largely blind, as I did, a word of advice; don’t worry too much about knowing anything about it, just go in and enjoy the pleasant ride.

Downton Abbey undoubtedly appeals most to fans of the hit TV period drama, who will find everything they love about the show in this feature adaptation, but it makes novices feel welcome too as it has a fun string of plots filled with likeable characters for audiences to enjoy themselves with, as ridiculous and inoffensive as it can sometimes be.

Want to decide what the movie’s like for yourself?
Check out Downton Abbey showtimes in London
via