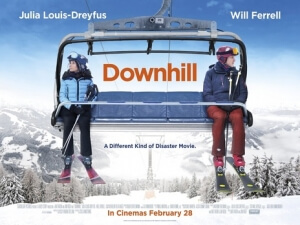 BASICALLY…: During a family skiing trip, a married couple (Ferrell and Louis-Dreyfus) find their relationship tested…

Having been on a number of skiing trips with my family throughout my life, I can’t exactly say that I thoroughly enjoyed them (in fact, I haven’t been for nearly ten years while my family continues to ski once a year), but I certainly remember them being a little more enjoyable than Downhill.

An English-language remake of the critically-lauded Swedish film Force Majeure, this is a rather odd film that feels like there was a major language barrier during the translation, and the result is a jumbled bowl of word salad where everything feels somewhat muted, and most jarring of all uncertain of what it’s trying to even say.

The film, similar to the original, follows an American family – Pete (Will Ferrell), Billie (Julia Louis-Dreyfus) and their two young boys – on a skiing trip in the Austrian alps. At first, they seem like a tightknit family unit, but that drastically changes when, whilst at a mountain restaurant, they come face to face with an avalanche. Although they survive, Pete and Billie’s relationship begins to deteriorate when she realises that, just before the avalanche hit, Pete ran off and left his family to be buried in the snow.

What follows is an awkward and at times frustrating lack of communication between the two leads, who really need to come together and talk about the incident, but keep getting interrupted by other events or Pete trying desperately to avoid the conversation at all costs. Between Pete burying his head in the sand (or the snow, in this instance) and Billie consistently getting more and more passive-aggressive as the minutes go by, there’s no good reason to care about either of them because they are both selfish and vapid in their own ways, leaving you without a side to empathise with. Sitting there just watching these people’s relationship fall apart isn’t a fun experience, because not only are you constantly feeling fed up with their lack of basic communication which really could solve so many of their issues, but there’s nothing to them as actual characters that you can get behind to give a damn about. This is despite the efforts of both Louis-Dreyfus and Ferrell, who give a couple of meaningful and subdued performances (the latter especially) that are among some of the actors’ strongest dramatic work in a while, but they are let down by a script by directors Nat Faxon and Jim Rash as well as Jesse Armstrong (who previously worked with Louis-Dreyfus as a writer on the TV show Veep) which lays a little too heavily on the dry dialogue and characterisation to fully work.

With Ferrell’s involvement in the film, as well as the way in which the promotional material has been structured, audiences going in expecting another zany comedy in the same vein as Daddy’s Home or Step Brothers will be extremely disappointed. Despite the somewhat misleading tone of the trailers, this is much more of a sombre drama with comedic elements than anything else, and even those elements feel very muted in comparison to a lot of other things. It creates an awkward tone throughout the whole movie that makes it feel so odd to watch, because there’ll be scenes where at first it seems rather serious but then it feels the need to throw in a funny moment that isn’t needed in the moment, which leaves you a little confused as to what to feel. There are even certain characters such as an eccentric resort philanderer, played by Miranda Otto with an extremely campy Austrian accent, that feel like they are from a completely different movie than the one that they’re actually in, probably the kind of Will Ferrell comedy people are probably going into this expecting to see. The tone feels so all over the place that it can sometimes be distracting, because you are always waiting for the other shoe to drop when it comes to the main character’s problems, only to find that it is a squeaky clown shoe being dropped instead, and it throws you off more than once.

It’s a little unfair to call it out for not being a very good comedy, because that’s not really what the film is, but it is also not a very good drama, either. As previously stated, so much of the conflict could be solved fast by just a simple conversation between these two, but because of their egos and petty nagging they almost never make the opportunity a reality, with Ferrell’s Pete going so far as to deny that the thing he is accused of doing never even happened, and Louis-Dreyfus’ Billie even forcing their own children into the argument. There’s no weight to the drama because there always feels like there is a way out, but because of the directionless writing it stays exactly where it is without venturing anywhere forward, which leaves you with a largely unenjoyable experience watching these two people you don’t really care about go on and on about something which could easily be resolved.

A story like this where a couple’s relationship is tested after a major incident can definitely work – in fact, it worked well enough with the original film that this one is based on – but it needs both the drama and the comedy to make it work, which are two things the movie sadly isn’t strong enough to produce. Perhaps the title Downhill is appropriate, because there’s certainly no going up from where it leaves you.

Downhill is a flat, dry and mostly awkward English-language remake of the hit Swedish film Force Majeure, with an unbalanced tone that easily distracts from the thin drama and out-of-place comedy, as well as main characters you don’t find yourself caring that much for, despite the solid dramatic turns by both Will Ferrell and Julia Louis-Dreyfus. An actual skiing trip with the family is more entertaining than this.

Want to decide what the movie’s like for yourself?
Check out Downhill showtimes in London
via