Dora and the Lost City of Gold (Review)

Dora and the Lost City of Gold (Review) 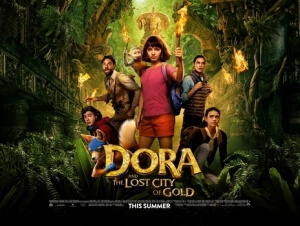 BASICALLY…: Teenage explorer Dora (Moner) leads an adventure to save her parents (Peña and Longoria) and solve the mystery of a fabled Inca civilisation…

Dora the Explorer, the titular star of the hit Nick Jr. educational programme, is a revered cultural icon amongst children’s television enthusiasts, not just for her recognisable outfit and short-bob hairstyle, but for bringing a lead character of Latino origin to the forefront of pre-school entertainment, in a notable step towards greater diversity in the field. Even if you’ve never seen an episode of the series, whether as a child or watching it with a child, you can just take one look at her and correctly say who she is; that’s how big of an impact she has made on audiences worldwide, regardless of your actual feelings for the show.

The first step to ensuring that a live-action feature film based on the cartoon character remains as true to their recognisable spirit as possible, is by hiring an actress who can inhabit her wide-eyed enthusiasm and adapt it to the script’s fun-loving and self-aware attitude. Rising actress Isabela Moner, previously seen stealing scenes in Instant Family, Sicario 2: Soldado and Transformers: The Last Knight, not just inhabits the role of Dora the Explorer, but completely embraces all of the absurdity that comes with it, making her the perfect person to lead this fun family adventure that’s way more entertaining than you’d probably imagine a Dora the Explorer movie ever being.

Moner plays the eponymous jungle-based explorer as a teenager, when her parents Cole (Michael Peña) and Elena (Eva Longoria) tell her that she must travel to the city to stay with her cousin Diego (Jeff Wahlberg), while they go and search for the fabled Incan city of Parapata, which is said to be filled with gold. Dora struggles to socially fit in to the confides of a normal high school, but on a field trip she, Diego and classmates Sammy (Madeleine Madden) and Randy (Nicholas Coombe) are kidnapped and taken to the South American wilderness, where they – along with their new adult friend Alejandro (Eugenio Derbez), and Dora’s pet monkey Boots – must venture towards Parapata itself, before a group of ruthless treasure hunters, as well as Swiper the fox (voice by Benicio del Toro), can get there first.

Right away, the movie has tons of fun with some of the show’s most notable traits – early on, a young Dora looks straight at the camera and asks the audience a question while taking a long time to continue (which was part of the original series’ interactive nature), but we actually see others react to her suddenly talking to nothing – and the wide-eyed enthusiasm of Dora herself as she explores everything around her. Moner commits heavily to the cartoonishly optimistic nature of the character, and in doing so delivers a comedic performance worthy of recognition; she scores huge laughs as she tries to fit in to her more urban surroundings, and when she brings the familiar attributes of the character to more real situations than the show ever provided (wait until you hear her make up a song about digging a hole to poop in). She also brings a sweet charm to the role that makes her instantly lovable to fans of Dora the Explorer as well as anyone who’s never seen an episode, and she easily carries the movie like the backpack she always brings with her.

Director James Bobin and co-writer Nicholas Stoller – who previously worked together on the two most recent Muppet movies – bring a largely self-aware attitude to the film’s comedy that also helped their last family-friendly collaborations achieve a great degree of meta success. Particularly in the city-set first half, they are having fun with the concept of a character like Dora the Explorer attend a normal high school, which is where Moner, again, scores huge laughs from the mere physicality of her performance alone; when things move to the jungle for the remainder of the film, though, things starts to become more like a family-friendly version of Indiana Jones or Jumanji: Welcome to the Jungle, which doesn’t hurt the film necessarily as there is still some enjoyable humour to be found here (even some of the more juvenile jokes, such as an extended fart joke in the midst of a quicksand pit, are so enthusiastically delivered that it’s impossible not to smile along with them), but it’s where the film begins to take itself a little more seriously. Because a lot of the humour surrounding the odd nature of Dora herself was working rather well beforehand, it’s a little jarring when suddenly the film is asking you to put most of that aside so it can be an actual adventure movie in the same vein as those previous examples I mentioned. Most people going into this probably aren’t even thinking about treating Dora the Explorer like she’s Lara Croft (except The Hollywood Reporter’s Todd McCarthy, who in his review seems all too creepily invested in the feminine physique of Dora the Explorer), so it is admittedly odd when we are suddenly asked to do so.

However, it has enough strengths to it, such as a largely winning sense of humour and an extremely committed lead comedic performance by Isabela Moner, to pass as a fun adventure movie that the family can enjoy just fine. Those who grew up with Dora the Explorer, and who are probably now around their early-to-mid teens, will probably enjoy seeing their childhood icon lovingly riffed on the big screen while staying true to the good-natured and wholesome spirit that the original series provided. Whether or not this will stem into its own film franchise is up in the air right now, but wouldn’t it be something if the Dora saga adopted the Indiana Jones route and had the explorer come up against the Thuggee cult from Temple of Doom in her next movie? I would certainly pay top dollar to see her smile at the camera and say, “Can you say, ‘Kali Ma’?”

Dora and the Lost City of Gold is a fun family adventure that has a ball riffing on the key attributes of the original Dora the Explorer TV show, including a very committed comedic performance from Isabela Moner as the explorer herself, although it threatens to take itself a little too seriously during its more adventurous half.