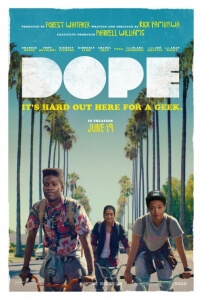 BASICALLY…: A chance invitation to an underground party leads streetwise geek Malcolm (Moore) and his friends on a life-changing journey…

Contrary to what Hollywood might believe in the midst of its diversity problem, black filmmakers are actually making some of the more fascinating movies out there at the moment, probably putting more thought and effort into their projects than roughly half of the major studio blockbusters – Ava DuVernay with Selma, F. Gary Gray with Straight Outta Compton, and now Rick Famuyiwa with his breathlessly fun mixture of 90s sentimentality and urban street cred known as Dope.

Right away, Famuyiwa presents us with a pleasing alternative to the atypical black gang member protagonist with Malcolm (Shameik Moore), a geeky Inglewood teenager who, along with his friends like laidback Jib (The Grand Budapest Hotel’s Tony Revolori) and lesbian Diggy (Kiersey Clemons), shares a fascination with examples of white culture like manga comics, Donald Glover and applying to colleges. Things start to go a bit Superbad when they’re drawn to a party for drug dealer Dom (rapper A$AP Rocky in his film debut), mainly because of Malcom’s affection for Dom’s girlfriend Nakia (Zoë Kravitz), but it switches to Superfly mode when they inadvertently end up with a bag of MDMA, or “Molly” as it’s referred to, and must find a way to get rid of it without going to the authorities. From there, it’s a crazy adventure where they come across several colourful characters as they juggle their severe situation while also worrying about their college applications.

Famuyiwa presents here an interesting examination of black stereotyping, taking a different approach to the subject than other films like Boyz N The Hood, Friday and pretty much anything Spike Lee has directed. Malcolm and his friends are picked on several times either by other characters including their own teachers (Malcolm is dubbed “arrogant” by one for wanting to apply to Harvard) and by Keith Stanfield’s shoe-thieving bully for doing and liking things that seem to go against the norm for most young black people. They have been immersed in white culture more than enough to be seen as a betrayal of black standards according to their peers, but they don’t care; in fact, they’re quite comfortable with who they are, and seem determined to break away from what society deems them to be by attempting to succeed in areas they are expected not to even consider. So, when they are suddenly thrust into a drug-dealing situation, which by all accounts should devalue external presumptions of their race even less, they are challenged with the subtle conflict of succumbing to the expected stereotypes that they are initially trying to avoid. It’s not so much a coming-of-age story, and more of a coming-of-race one which, especially in these types of films, you don’t usually see that often.

It’s clear that Famuyiwa has a message to convey within the subtext of his film, and thankfully he remembers to also include a seriously pleasing amount of comedy, heart and intelligence to counterbalance it. The levels of comedy help it stand out as one of the funniest you’ll see all year, with riffs on wordplay and certain anachronisms used to describe black people as uttered by white people helping to score big laughs, as do moments of dark comedy (like an unlucky geek meeting his fate just moments before completing The Legend of Zelda on his GameBoy) and Inbetweeners-style sex and gross-out gags all within the same scene. Revelations about the identity of certain figures, such as a mysterious drug peddler known as AJ, also give the plot an amusing twist (and the actor they got to play that particular character is rather intimidating, so it’s perfect casting on that front). The lead characters are also well-written enough to sustain multiple viewings; they’re likable, charming and share great chemistry with each other to form a group of outsiders that you’re rooting for to succeed by the end. This is mostly thanks to their endlessly engaging performances, including and especially Moore who is primed to break through into the mainstream with his standout performance here.

Though the influence of the 90s is heavily present, it also cleverly uses them in a modern day environment with today’s technology and cultural pinpoints – enemies track down the kids using the Find Your iPhone app, money is made online using untraceable Bitcoins, and awareness of the drugs is spread via several social media stations and viral videos parodying the unethical interviews of black citizens on TV news-stations (remember the “Hide yo kids, hide yo wife” guy? Yeah, those kind of interviews).

It all ties together nicely to create a timely film that should be primed to become a new cult classic amongst teenagers, alongside The Goonies and Anchorman if it’s exposed to enough people of this particular age demographic. The problem facing this is a very simple one: it faces a limited exposure in our cinema screens most likely due to it being considered more for black audiences than anyone else. We respectfully disagree, if that is indeed the case; Dope is a film that does deserve to be seen outside of its ethnic demographic, because it is funnier, sweeter and better-written than some of the more mainstream films made for and made by white people – we’d much rather people see this than, say, The Transporter Refuelled, but the fact that it’s not showing on as many screens is truly worrying. We can only hope that it finds its audience one way or another, if not in cinemas then surely on DVD or VOD, where distributors have no excuse to limit its reach.

After all, if it’s for a film as good as Dope by a filmmaker as promising as Rick Famuyiwa, then it will be more than worth it.

Dope is both a fascinating re-examination of black stereotypes by its writer-director Rick Famuyiwa, and also a deeply funny and warm comedy with likable characters, solid performances and a healthy influence from 90s culture that deserves to be seen by more audiences than distributors probably expect.