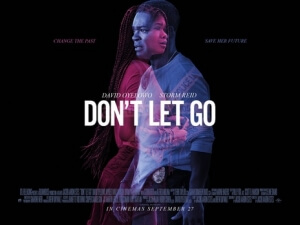 BASICALLY…: After a personal family tragedy, a detective (Oyelowo) begins to hear the voice of his dead niece (Reid)…

Producer Jason Blum’s business model is revolutionary; instead of pumping millions and millions of dollars into a big movie that might not work, he and his production company Blumhouse take that money and uses it to fund several low-budget films that are more likely to make their money back by the end of their opening weekends. He’s generated several gems from this approach – among them The Gift, Upgrade, Happy Death Day and even Oscar contenders like Get Out, Whiplash and BlacKkKlansman – as well as some serious stinkers – among those are the likes of Ouija, The Gallows, Truth or Dare and Jem and the Holograms – but with very rare exceptions, they have all turned in a profit for the company and transformed it into a major studio on the rise.

There are, in addition to the gems and the stinkers, the ones that are stuck somewhere in the middle; the ones that have ambition to them, and strong qualities such as powerhouse performance and decent cinematography, yet don’t always come together to make a satisfying enough whole. Don’t Let Go is one of those films, taking a concept that sounds intriguing enough but is marred by a shaky execution.

We start off as we see Los Angeles police detective Jack Radcliffe (David Oyelowo) pick up his teenage niece Ashley (Storm Reid) from a solo venture in the city. They have a sweet bond, as he seems to fill the void that her bipolar father (Brian Tyree Henry) is apparently unable to fill. But tragedy strikes when Jack finds Ashley and her parents dead from an apparent murder-suicide, sending him into a deep well of depression – that is, until he suddenly gets a phone call from Ashley, still alive and completely normal. He soon deduces that, by some miracle, Ashley is communicating with him from the past, and that he must now find a way to prevent her death before it even happens.

Taking a supernatural approach with a hint of sci-fi time travel, the film resembles a slightly more straightforward version of Donnie Darko, which similar to this film falls apart somewhat when you start to think about how it’s all supposed to work. Its best moments are between the two lead characters; Oyelowo is a powerful actor to make even the most redundant material come to life, and Storm Reid – previously seen being the best thing about the otherwise awful A Wrinkle In Time – is fast becoming a strong performer in her own right, and to see them bounce off of one another (albeit over the phone for the majority of the movie) is quite wonderful. They have a genuinely sweet chemistry which makes you root for things to work out for the both of them, and they are good enough actors to carry you through some of the more ridiculous plot twists that unfold.

Case in point, the film is also something of a police procedural, which means it has the sudden turns that you’re probably already thinking of, especially when part of the plot is investigating a string of corrupt cops. The film could easily have done without it, and wouldn’t be so bogged down by clichés you can see coming from miles away, which prevent it from being the fresh take on time travel that it thinks it’s being. You know who’s going to turn out to be the bad guy in this because you’ve seen every crime thriller about corrupt cops ever, and even when it tries subverting your expectations it feels unnecessary, because when you consider the context of the scene (which is spoiler-heavy, hence why I’m being so vague about everything) there’s really no reason why things had to unfold the way they do here. On the flip side, though, you have Mykelti Williamson having a blast as Oyelowo’s partner, and Alfred Molina even shows up to be his slimy on-screen self as their superior, and it’s nice seeing these two actors play over-the-top in a movie like this. Unfortunately, they’re in a completely different movie than the one that we should be watching instead.

Because it wants to be a standard crime thriller at the same time as being this supernatural sci-fi drama, it struggles to find a consistent tone. Writer-director Jacob Aaron Estes – his first major film since 2011’s The Details, and before then was known for dark indie thriller Mean Creek – wants to have it both ways, yet he doesn’t realise that one half is clearly more interesting than the other, and frustratingly gives that other more of a presence than it should. Every time it cuts back to whatever’s going on with Jack’s work as a police detective, it leaves you wanting to return almost immediately to what drew audiences into it to begin with, that being a Hitchcockian thriller with hints of supernatural and sci-fi. When it does focus on that part of the story, it’s intriguing; the way it cuts back and forth between Jack and Ashley’s timelines is subtly done, but because a lot of the rest of the movie is spent being a by-the-numbers police thriller when that time should have instead gone into developing the more interesting part of the story, it feels disappointingly underdeveloped.

Though the movie doesn’t exactly work as a whole, there are elements to it that keep you hooked for long enough; it’s the fact that it could have been a lot tighter and more focused which really prevents it from being one of the better Blumhouse productions of late. Instead, it’s a middling mess that’s neither great nor terrible, but has a concept that feels somewhat wasted by the execution.

Don’t Let Go has an intriguing set-up, which contains many of the film’s strongest qualities including its ambition and powerful lead performances by David Oyelowo and Storm Reid, but it feels underdeveloped thanks to a heavier-than-necessary focus on the police procedural part of the story, which contains many by-the-numbers clichés that prevent the overall movie from being as strong as it could have been.

Want to decide what the movie’s like for yourself?
Check out Don’t Let Go showtimes in London
via