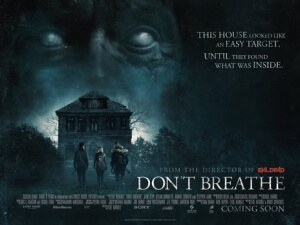 BASICALLY…: Delinquent teenagers break into the home of a blind man (Lang), who turns out to be more deadly and terrifying than any of them could have predicted…

When will people in movies learn the valuable lesson of not messing with Stephen Lang? This is a guy who throughout his career has played not one but two feared Confederate generals – Thomas “Stonewall” Jackson in Gods and Generals, and George E. Pickett in Gettysburg – featured in short-lived TV show Terra Nova as a hard-ass commander with a T-Rex skull for a desk, and was the antagonist in the biggest film of all time worldwide Avatar as a brutal Army general who gets fatally shot at by arrows, and is STILL going to be in the sequels.

Basically, Stephen Lang is a walking Tiger tank of immortality, one that will do whatever it takes to get his comeuppance on anyone who crosses him, no matter what is thrown in his path from an un-breathable alien atmosphere, to now being completely without the ability to see. As it turns out, when he’s the latter, he’s even more frightening and seemingly indestructible than ever before, which really makes me wonder why these people are even contemplating breaking and entering his house to begin with. But hey, if they had any common sense, there wouldn’t be the utterly terrifying Don’t Breathe to recommend as a seriously intense and disturbing horror film to check out.

The plot, if you’re not already familiar from the incessant online viral marketing, sees a trio of young burglars (Jane Levy, Dylan Minnette and Daniel Zovatto) target a blind man who is said to have over $300k somewhere in his house as a settlement after his daughter was killed in a car accident, and plan to use the money to escape their rubbish lives in rundown Detroit.  Unfortunately for them, that blind man is played by – you guessed it – Lang, and what was originally a simple robbery turns into a much more terrifying cat-and-mouse chase around his house, something that not even a lack of eyesight can prevent him from exacting unholy retribution on them.

This is the second film by director and co-writer Fede Alvarez, who along with co-writer Rodo Sayagues (who also helped Alvarez write this film) previously did the 2013 remake of Evil Dead. I wasn’t a huge fan of that film, as I felt that on top of it being a completely unnecessary update of Sam Raimi’s horror classic, it was a little too gross, too unpleasant and not really that enjoyable for my tastes. Apparently, both Alvarez and Sayagues came up with the original concept of Don’t Breathe as a counteract move after dabbling in studio-backed franchise fare with Evil Dead, and wanted it to be as opposite to that film as possible. For example, the lack of blood and guts in this film (aside from a few obvious wounds) is wildly in contrast with the gory nature of that other movie, and this one keeps itself far more grounded in reality as opposed to the supernatural and demonic elements that lingered over that one. Needless to say, Don’t Breathe is the more effective film out of the two, as Alvarez really seems to enjoy dangling the audience above a spike all throughout this movie, never once letting the lingering threat take a rest and always leaving you squirming and fearful about what might happen next. He’s clearly more in his element here than with his debut film three years ago, and if he continues to favour this type of horror film then he could seriously be the modern equivalent of Wes Craven or even Raimi himself (who also produces this film).

The scares in this film are indeed more down-to-earth, and a majority of them come from Lang’s incredibly intimidating presence. This isn’t a case of the monster being mostly hidden in the shadows for a good chunk of the movie, as we get to see him in full very early on, but as the film goes on we get to see more and more of his darker side, especially a midway reveal that reveals his truly monstrous attributes, and every time he suddenly shows up in a frame of this movie it becomes extremely unsettling, since we all know what he can do by that point, blindness be damned. There’s only a couple of dumb jump-scares, and as the film starts to reach its ending point it can get a little too convenient for its own good, but for a huge chunk of this movie you will find yourself as on edge and as terrified as I was, especially when it gets to what is already being called the most controversial part of this movie (all I’ll say is, a turkey baster is involved).

As a piece of filmmaking, it’s also very well constructed. Alvarez does have a strong eye for intimidating visuals and pacing – even Evil Dead, as much as I didn’t care for that movie, I thought was still a well-made one – and allows each aspect of the cinematography, set design et al to set the eerie tone and make later scenes all the more terrifying. It’s a film that really makes you feel uncomfortable but in a way that’s appropriate for a film like this, and he takes advantage of the claustrophobic setting of this blind guy’s house to really make some of the most haunting visuals you’ll probably see in a horror film all year.

As it goes with my never-ending claim that the horror genre is undergoing a mini-Renaissance with films like this, The Babadook, It Follows etc, Don’t Breathe is definitely a strong and delightfully nasty reinvention of the home invasion thriller, and should definitely put the genre in a better position than it has been as of late – at least, until the next redundant and crappy jump-scare fest comes around. But that won’t have Stephen Lang in it, so it already fails.

Don’t Breathe is an extremely intense and delightfully nasty home invasion thriller where director Fede Alvarez takes full advantage of the creepy atmosphere and Stephen Lang’s intimidating presence, and manages to create a horror film that will stay with you for a long while after seeing it.