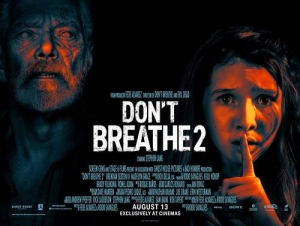 Remember in 2016’s horror breakout Don’t Breathe where a blind Stephen Lang terrorised a group of young home invaders, and was then discovered to have kidnapped and forcibly impregnate the woman who killed his daughter in a car accident, so that she can give birth to another child for him to raise?

In Don’t Breathe 2, the villain of the first is very much an anti-hero here, and the sudden shift in perspective and treatment is honestly rather jarring; it’s like if Freddy Krueger suddenly decided to open a bright and sunny day care centre. Whether or not you can tolerate a film where the main “hero” was previously depicted as an all-out evil psychopath will determine how you react to this sequel, but if you are a bit more willing to see how they manage it, you’ll get a follow-up that’s by no means as suspenseful or as terrifying as the original, but at the same time is never boring to watch.

Taking place a number of years after the events of the first film, the blind war veteran Norman Nordstrum (Lang) now lives in a secluded home somewhere in the grimy suburbs of Detroit. He also lives with Phoenix (Madelyn Grace), a young girl who he has taken in as his ward, and despite being taught numerous survival skills by him longs to have actual friends and a normal childhood. However, their imperfect but peaceful existence is threatened when, one night, a group of invaders shows up with their eyes firmly on Phoenix, for reasons that soon become very apparent. Norman, using his heightened senses to track down and eliminate the threat, soon finds himself battling for his soul as harsh truths begin to surface regarding both his and the invaders’ true connection to Phoenix.

The first film’s co-writer, Rodo Sayagues, replaces Fede Álvarez as director this time round (though both still provide the screenplay, while Álvarez remains as producer alongside Sam Raimi), and while there are a few noticeable cracks in his directorial debut – some of the pacing is stop-and-start, while a couple of the supporting performances feel somewhat flat – there is some ambition on display that does feel like it’s trying hard to not be a rehash of the first Don’t Breathe movie. While the first half does deal with the whole home invader ordeal again, there is enough of a difference in the motivations and the overall storytelling to set itself apart, and there are some brutally violent moments that get gleefully ridiculous as the movie goes along. Plus, when it expands into a pretty grisly second half, involving organ traffickers and wheelchair-bound meth addicts, it gets pretty sinister and sleazy to a point where you feel like you might need a shower after watching it. Sayagues does have an idea of how to competently build suspense, whether it’s through long one-takes or chilling close-up shots of people’s faces, and maintain a scuzzy tone that does not let up at any time.

However, try as it might to paint the main character in a slightly more positive light – to a point where he even has a “save the dog” moment – it’s nearly impossible to be fully on board with this guy, especially after seeing what he was doing in the last film. Don’t Breathe 2 obviously wants to give the character of Norman Nordstrum a redemptive arc, but it’s hard to buy that someone who did what he did previously suddenly expects the audience to side with him, no matter how creepy and unnerving the main villains in this movie are. Even in this film, he’s initially hard to sympathise with, since he’s quite restrictive and stubborn as a parental figure, and his methods of killing people are so intricate that you honestly forget that he’s blind half the time; he could easily be mistaken for an older version of Daredevil, and it would make about as much sense. Stephen Lang is an intimidating presence as always, though certain things about his performance aren’t entirely consistent; he starts the film with a raspier, old-man voice which slowly fades away as the movie plods along, and again you forget half the time that he’s supposed to be blind because he does things that even full-sighted people would be completely aware of.

While the ambition is certainly evident, Don’t Breathe 2 just doesn’t come together as much as it wants to. It’s difficult to shake off the fact that we’re now meant to root for a nefarious monster like Norman Nordstrum, especially in a film that lacks the true suspense and terror of the original, while focusing on sequences that can certainly get disturbing and gruesomely violent but never as satisfying as they ought to have been.

Don’t Breathe 2 lacks the true suspense and terror of the original, and makes the interesting but fruitless decision to turn the irredeemable lead villain into a redemptive anti-hero, but there is some decent filmmaking ambition and gruesome gore to somewhat admire.

Don’t Breathe 2 is now showing in cinemas nationwide – click here to find a screening near you!