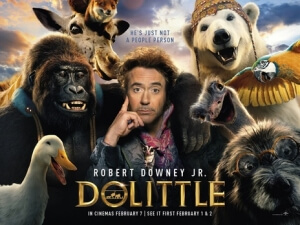 BASICALLY…: Reclusive physician Doctor John Dolittle (Downey Jr.), who has the ability to speak to animals, must set out on a perilous journey with his animal companions…

If there is one positive thing that can be said about Dolittle, because it really is as big of a mess as you may have heard, it’s that it doesn’t seem like the filmmakers intentionally set out to make a bad movie. The appeal of the project is easy to understand, because at first glance it seems like it would be a nice call-back to some of the epic adventure movies of the past, and there are moments when those influences become apparent.

However, this movie is neither epic nor adventurous; instead, it is a wildfire of misguided decisions and bizarre executions, not only squandering its potential but also setting the bar so low for big adventure movies that other filmmakers might actually be discouraged from making their own just from watching it.

At first, the plot of the film doesn’t sound like it would be too bad; Doctor John Dolittle (Robert Downey Jr.), a world-famous physician with a remarkable gift of talking to animals, has become a hermit following the demise of his wife. However, adventure comes knocking when he and his animal friends are summoned to aid the Queen (Jessie Buckley), who has mysteriously fallen ill and can only be cured by a rare fruit on a lost island, which also happened to be where his late wife was headed before she died. Dolittle and his furry companions then set off to travel the world and find the rare fruit before the Queen succumbs to her fate.

It’s very shortly after the rather stunning 2D-animated prologue where you start to see what exactly is wrong with this picture. Just from looking at the way that the film is shot, edited, paced, acted and designed, you can tell that this was a movie which was butchered by studio interference (adding fuel to that fire is the fact that Jonathan Liebesman, of studio projects like Battle: Los Angeles and the 2014 Teenage Mutant Ninja Turtles reboot, oversaw extensive reshoots with original director Stephen Gaghan), with no distinct creative voice to call its own and several plot threads left to dangle freely without ever being revisited. With every low-brow joke from tigers being kicked in the junk to the numerous fart gags, you can just feel the script notes being written by the studio executives who thought that this whimsical family-friendly adventure set (presumably) in Victorian England needed a squirrel making Star Trek references, a duck quoting a line from Rush Hour, and John Cena voicing a polar bear that uses phrases like “bro” in every other sentence he utters. It’s embarrassingly hacky stuff, the kind of studio-dominated dreck not seen since last year’s ill-fated Hellboy reboot, and completely sends any good intentions the original filmmakers had going into it sinking down into the ocean.

It’s even more disheartening when you see the amount of talent roped into this, many of whom are either totally wasted or are directed in such a bizarre way that their performances come out as bizarrely bad. So many of the starry voice actors, from Tom Holland to Ralph Fiennes to Marion Cotillard, have absolutely nothing to do other than just provide their recognisable voices to animals that really could have been voiced by anyone, while most of the human actors are side-lined so hard it’s almost insulting, especially when you have great actors like Jim Broadbent and Jessie Buckley there doing absolutely nothing half of the time (the sole exception being Michael Sheen who, in true Sheen fashion, goes very over-the-top as the film’s sneering villain, in one of the few instances where you can see the influence of old-fashioned family movies). As for Robert Downey Jr., it’s an unfortunate case because you can tell that he’s putting everything he can into the part, but he is let down so hard by a script that gives him nothing interesting to work with, and direction that makes a complete fool out of him in scenes where he is just grunting and acting aloof in a Captain Jack Sparrow kind of way – and that’s just describing his oddly out-of-place Welsh accent, which doesn’t seem to fit the character and also sticks out like a sore thumb thanks to some pretty bad ADR work for a costly movie such as this.

It’s a movie that takes its $175 million budget, pours several gallons of gasoline over it, and then sets it alight with a single match; you really can’t believe how much they’re screwing up something which should have been so easy to make good, but instead it’s an utter catastrophe of bad behind-the-scenes decisions and weird executions that it’s hard to fathom exactly what was going through the filmmakers’ minds when putting this Frankenstein’s Monster of a movie together. Even the Eddie Murphy version is superior to this, because at least it had the decency of actually feeling like a complete film, made by people as well as a studio who had some idea of the movie they wanted to make. This version of Dolittle, though, is a gigantic mess that’s unfortunate for anyone involved with it, and should only be experienced if you just want to see what it’s like when a major studio decides to just set $175 million on fire.

Dolittle is a gigantic mess of studio interference and misguided decisions on the part of the filmmakers, squandering any potential as well as a talented cast and crew with lazy juvenile gags and senseless direction that lacks any genuine creative voice whatsoever, and sets epic adventure movies so far back that it’s unlikely we’ll see any of this size and magnitude for a long while.

Want to decide what the movie’s like for yourself?
Check out Dolittle showtimes in London
via