Dolemite Is My Name (Review)

Dolemite Is My Name (Review) 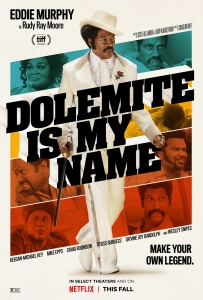 BASICALLY…: Comedian Rudy Ray Moore (Murphy) adopts the new stage persona of Dolemite, who he would go on to portray in a series of Blaxploitation films…

Welcome back, Eddie Murphy; you’ve been gone too long.

In recent years, the comedy superstar’s trademark liveliness and genuine passion seemed to have been replaced with something robotic and low-energy (case in point: he presented at the Oscars in this fashion a few years ago, and seeing him deliver his lines with none of that energy which made him a renowned comedic giant remains one of the most depressing things I’ve seen on the telecast in recent years). Whether the horrific reception of The Adventures of Pluto Nash, Norbit and A Thousand Words finally caught up with him, or if he simply lost his spark, it’s clear that Murphy has not been on top of his game for a while.

Until now, that is, and it took playing a true legend of black culture to help him finally get his groove back. Thank God that he did, because it’s films like Dolemite Is My Name that make me so glad we have someone as hilarious and charismatic as Eddie Murphy in our lives, and as a special bonus the movie itself is all sorts of fun to watch.

Murphy plays Rudy Ray Moore, a struggling musician and comedian who makes ends meet by managing a lowly record store in 1970s Los Angeles. He soon gathers inspiration to create a whole new stage persona: the sharp-suited, rhyme-spitting pimp named Dolemite, who quickly becomes an underground success with his outrageous comedy records. Eager to leave an even bigger legacy, Moore sets out to bring Dolemite to the big screen, despite knowing very little about how to actually make a movie. Nonetheless, with the help and support of his crew, and the reluctant participation of director D’Urville Martin (Wesley Snipes), he sets out to make what would turn out to be a true cult classic of not just Blaxploitation cinema, but cinema in general.

It shares similar DNA to both The Disaster Artist and Ed Wood (the latter especially, seeing how this movie was written by Ed Wood writers Scott Alexander and Larry Karaszewski), in the sense that it’s about a filmmaker whose line of work isn’t exactly regarded as particularly good – if you’ve ever seen Dolemite, or at least clips of it, you’ll see that the boom mic is in more of the film than the lead villain is – yet would go on to eventually find its audience despite the harsh critical reception. Like those other movies, Dolemite Is My Name serves as an unapologetic love letter to the eccentric creativity and inspiring enthusiasm of its lead figure, but this film keeps things fresh by having not just a wicked sense of humour but also a real charm and likeability to its soul that feels genuine and utterly irresistible. Alexander and Karaszewski’s script is filled with outrageous one-liners and fun characters that would have felt right at home in an actual Dolemite movie, as well as a truly sweet side as you see Moore and his friends clearly having the time of their lives making this movie, without a cynical attitude to speak of. The film’s bright optimism is highlighted in Craig Brewer’s direction, as he constantly steers the movie toward an uplifting tone that leaves you feeling so good while watching it; it’s little wonder why Brewer was hand-picked by Murphy to direct the upcoming sequel to Coming to America, because if he can bring life and joy to a movie about the making of Dolemite, then imagine what he could do with another beloved Murphy property.

Speaking of whom, it should be no shock to hear that Eddie Murphy is a true revelation in this movie. This is the most energetic that he’s appeared in years, throwing out one-liners like it was dollar bills in a strip club, and having enough charm and charisma to fill an entire concert hall, but also knowing when to reign it in for some of the film’s more dramatic scenes which prevent the character from becoming a two-dimensional caricature. You feel Rudy Ray Moore’s passion in the film because you feel Murphy’s passion in the performance, and it makes both the actor and character so incredibly likeable and easy to root for. He’s not the only actor to have plenty of fun in this movie; actors like Keegan-Michael Key (as Dolemite’s writer Jerry Jones) and Wesley Snipes get a lot of laughs, especially Snipes as the foppish D’Urville Martin, and there’s plenty of room left over for other performers to shine in smaller parts, from Tituss Burgess to Craig Robinson to Chris Rock. The movie, though, belongs to Eddie Murphy who, for the first time in so many years, resurrects the raw energy that made him a comedic giant in films like Beverly Hills Cop, The Nutty Professor, Bowfinger, Shrek and so many others, and it really is wondrous to see him back on top where he belongs.

Admittedly, I’m probably overly ecstatic about this movie because I am such a huge fan of Eddie Murphy (I’m one of those people who will happily admit to watching even Doctor Dolittle religiously back in the day), but this is extra special because, after seeing him be on auto-pilot for the last few years, it’s a relieving experience to see him once again be the great performer that he is, in a movie that couldn’t be better suited for him if it tried. It’s great to have you back, Eddie; hopefully you’ll stick around to stay this time (and maybe lay off some of the fat-suit comedies, too).

Dolemite Is My Name is a thunderous return to form for Eddie Murphy, who injects the role of Rudy Ray Moore with the same comedic energy and overwhelming charisma that made him a star in the first place, and the movie itself is an incredibly fun and upbeat love letter to the Blaxploitation classic and its many eccentricities.