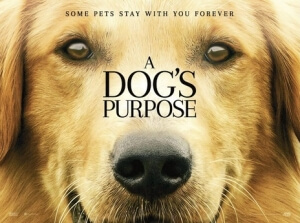 BASICALLY…: A dog (Gad) finds itself reincarnated continuously over decades, during which it uses that time to find its ultimate purpose in life…

You don’t even need to see A Dog’s Purpose to know that it’s catnip for dog lovers, designed specifically to make them go “aww” every other minute as a canine does something cute or adorable. In that regard, there’s no doubt that if you have a burning love for dogs then this is your cup of tea and dog biscuits, but for everyone else this is as saccharine and schmaltzy a film that you would expect out of an animal-centric family film like this.

Throughout the film, we follow a dog (given a voice via narration by Josh Gad) as it’s reincarnated as several different breeds over the course of multiple decades, starting off as a little puppy that’s almost immediately euthanized (within the first few minutes as well, so that’s a cheery way to kick things off), and then as a retriever named Bailey, who is adopted by young Ethan (Bryce Gheisar) and his family, and lives with them until old age sets in. Then, he’s back as a female German Shepherd police dog, owned by a Chicago police officer (John Ortiz), and then later as a little corgi by a lonely woman (Kirby Howell-Baptiste), and then finally as a Saint Bernard who eventually comes across Ethan at a much older age (Dennis Quaid).

It’s no spoiler to give away that much about the plot, because not only was much of it telegraphed in the film’s trailers, but you could predict these plot twists and moments of drama coming a mile away, because it’s some of the corniest, clichéd material this side of a Nicholas Sparks adaptation. The whole movie certainly has the feel of one of Sparks’ stories, only if there was a talking dog with the voice of Olaf from Frozen all throughout it, and much like one of those types of films it is as manufactured and sugary as the most frosted marshmallow in existence. It constantly plays to audiences’ emotions regarding animals, specifically of the canine variety, so whenever a moment involving a dog happens that’s desperately aiming for tears, the tone is set as though it’s the most heart-wrenching thing you could possibly imagine, but it doesn’t work because the manipulation tactics are extraordinarily easy to identify, and it just feels cheap instead of actually being heartfelt and legitimately sad. It’s made a little more unbearable because the dogs in this movie are legitimately adorable, and when they are shown as being on death’s door (it’s not a spoiler to say that the dog(s) die in this, otherwise there wouldn’t be much of a plot or a hook) it’s the cinematic equivalent of that Pound Puppies toy line where they forced you to buy the cute puppy toys otherwise it gets put down, which again is emotional manipulation of the highest order.

I can definitely understand why some people would be put off by Josh Gad’s voice constantly showing up to provide the dog(s)’s inner monologue, but he didn’t really annoy me that much; what DID annoy me was the dialogue he was given to speak into a microphone, because it fits the awkward tone-deaf feel of the movie perfectly. You would have a pretty serious scene involving the dog and one of his many owners, but then it’s ruined by a line that Gad is reading that’s about him as the dog wanting to scratch its own butt or feeling gaseous after eating too many hotdogs. It’s not Gad’s fault necessarily, he did what he could with the material that he was given, but the script was just so syrupy that no actor could really give it much gravitas to make it sound at least a bit more refined and dignified.

As for that controversial behind-the-scenes video with one of the stunt dogs being forced into a pool of water to swim around in as part of a major scene, it’s certainly debateable as to whether that was the best call to make by its handler, but it’s no more horrifying than some previous instances of on-set animal mistreatment such as The Adventures of Milo and Otis or Heaven’s Gate, and plus it’s already been disproven by the American Humane Association so there’s no reason to investigate it any further.

Bottom line is, if you’re really into dogs and just want to see them do their thing on-screen for a couple of hours, then this is absolutely for you. Other than that, A Dog’s Purpose doesn’t really have much of a purpose in your life other than to make snarky comments all throughout (for instance, it was directed by someone who was literally called Lasse), and if that’s more your thing then you’ve found your own purpose with this film.

A Dog’s Purpose is designed specifically to please dog-lovers, but for everyone else it’s a saccharine and schmaltzy animal drama with manipulative tendencies and a clichéd script that not even Josh Gad can save.