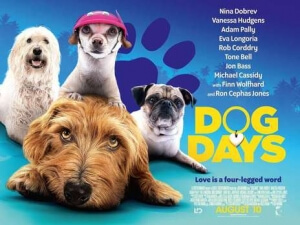 BASICALLY…: A group of people’s lives are all connected through their relationships with dogs…

Garry Marshall was a director who was so highly respected in the industry, from his early body of TV work on shows like Happy Days, The Odd Couple and Mork & Mindy, to some of his feature filmography which included Pretty Woman and Beaches among others, that numerous stars didn’t need convincing when they were approached to star in his collection of themed ensemble films, like Valentine’s Day, New Year’s Eve, and most recently Mother’s Day, the latter of which proved to be his final film before his passing in 2016. Unfortunately, those films turned out to be utter low-points for not just Marshall but most of the big-name actors roped in to performing in them, yet they did well enough at the box office to sadly guarantee more of these types of films, long after Marshall has departed from this Earth.

Dog Days is the latest movie to cash in on the late director’s even later trend of placing numerous recognisable actors in a movie with several plots recurring around one major theme,. Can you guess what that theme is? Clue: it’s in the title.

Yes, dogs, dogs and additional dogs are at the forefront of this movie, with director Ken Marino this time being the one trying to keep the “spirit” of Marshall’s later movies alive, and the results are pretty much what you’d expect; a cheesy, schmaltzy and pandering slice of cynicism that proves once and for all that you can have as many clichéd and hackneyed plot lines as you want, so long as you put a cute dog giving literal puppy dog eyes at you every five minutes.

So many plots to describe here, and in such a small amount of space, so I’ll try to sum up the ones that I can remember off the top of my head; there’s one that involves a slacker named Dax (Adam Pally) who’s forced to look after his sister’s overbearing dog while she’s looking after twin babies; there’s another that sees Vanessa Hudgens pair up with that schlub from the Baywatch movie (Jon Bass) as a volunteer at a local dog shelter; couple Eva Longoria and Rob Corddry adopt a lost pug for their adopted daughter, except that pug belongs to a crotchety old man (Ron Cephas Jones) who himself partners up with a young pizza delivery boy (Finn Wolfhard from Stranger Things and It) to find her; and other ones that I know I’m forgetting but really don’t need to go too much into, because they are all so similar and dog-centric that they could just as well blend into one big blob.

As you may have sussed, just like with Mother’s Day, New Year’s Eve and Valentine’s Day, this movie is once again about a group of (mostly white) people with cushy lives and nice Los Angeles home interiors, only this time their problems are either helped or caused by the interference of dogs in their lives. Sometimes, the dog(s) in particular stories doesn’t even seem to be important; for instance, Nina Dobrev is a talkshow host whose main plot in the film is her trying to cope with her new co-host (Tone Bell), and while there are scenes of the two of them – who of course later develop an attraction because that’s the kind of movie this is – playing with their dogs in the park, the canines might as well not even be there because their owners’ story takes much greater precedence, so much so that you forget that they even have dogs at all.  There’s even a scene in this subplot that goes straight into Marley and Me territory, and it not only comes out of nowhere but it feels so unearned because you’ve not been caring about anything or anyone here due to the sappy sitcom shenanigans they’ve been throwing at you up to this point that’s more syrupy than a diabetic’s breakfast. It’s a cynical ploy by the filmmakers to get you to cry at the cute dog because that’s all they think their audience will respond to, and not any kind of clever writing or endearing characters which actually can manage to get an emotional response when done right, which the rest of the film is nowhere even close to achieving.

It’s exactly the kind of movie you’re probably expecting it to be; a near-identical clone of those Marshall ensemble movies, only instead of a holiday theme it’s all about dogs, where it’s a bunch of actors mostly slumming through their lines towards an easy pay-check, with no care about how trite and sitcom-like the dialogue and scenarios are because this was a project that was probably just shooting a few blocks away from their houses. It’s a movie that’s been mechanically engineered to appeal directly to dog lovers, to whom this is basically hardcore pornography with so many cute dog faces close up on the screen that you can practically feel their panting lightly touch your face. I know this for a fact, because I saw this in a screening with several female audience members who were “aww”ing and cooing every single time a dog popped up onscreen; I hate to generalise, especially when we as a species are only now being reprimanded for gender inequality and misogyny, but it is so clearly designed for women to fawn over that it’s kind of creepy, like they’re banking on women of all ages to be too distracted by the cute doggies to recognise that the film is a schlocky and cynical treacle-fest with far bigger problems in its lazy script and sitcom-like direction than you can shake a stick at.

At least Marshall is probably looking down on this film from the clouds, nodding his head in approval (though I don’t know why he would, because this movie isn’t as punishing to sit through as Mother’s Day was – but this is still pretty bad).

Dog Days is a cynical attempt to continue late director Garry Marshall’s trend of themed ensemble movies, and in doing so retains many of the same problems as those films including treacly storylines, clichéd dialogue, and a worrying amount of pandering to a certain demographic, in this case dog lovers who will probably eat this up like dog food.