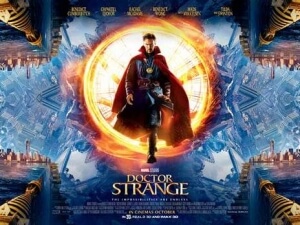 BASICALLY…: Following a career-ruining car accident, neurosurgeon Stephen Strange (Cumberbatch) learns about the mystic arts, and the many reality-bending methods used by a band of warriors…

For once, can the Marvel Cinematic Universe just suck? Not that I’m complaining that the studio has put out hit after hit since kicking off in 2008, but since then they have developed and nurtured several big-screen outings for their most popular characters that have not only been barrels of fun to watch, but also at their heart been well-made and even sometimes thoughtful films in their own right. Even its weaker outings like Thor: The Dark World and The Incredible Hulk had more enjoyable elements than most other long-running franchises, and some of the set-ups and characters that seem destined to fail like Ant-Man or Guardians of the Galaxy always turn out to be instant classics for audiences everywhere.

However, their biggest gamble to date is undoubtedly their latest, which marks the big-screen debut of one of Marvel’s trippiest heroes, Doctor Strange. The character, created in the 60s by Spider-Man co-creator Steve Ditko, was designed to introduce readers to an entirely different realm of the comic universe, namely that of the psychedelic multiverse with its mind-bending realities and harnessing of sorcery skills to protect the world from supernatural threats, and his role is no different for this film, the second in “Phase 3” of the MCU’s master plan following this year’s earlier Captain America: Civil War. Nonetheless, Doctor Strange is still a gamble for Marvel Studios, because after grounding itself in a heightened reality that happens to feature robotic armour, genetically-enhanced super-soldiers, literal Gods with large hammers, and a gun-toting talking raccoon with a tree sidekick, would audiences feel that delving into a more mystical realm in the MCU be a step too far?

The answer, of course, is no. It is another success for the seemingly failure-free studio, one that does new and exciting things with a familiar formula that somehow feels fresh and new once more.

The journey begins when brash and arrogant neurosurgeon Stephen Strange (Benedict Cumberbatch) gets into a car crash which removes the use of his hands, leaving him without a career. Desperate to find any cure possible, he hears of a remote sanctuary in Nepal that could provide the answer, and upon travelling there encounters a Celtic being known as the Ancient One (Tilda Swinton). It is through his new mentor that Strange discovers a whole new realm of magic and reality-bending techniques, from being able to harness energy so he can create fighting weapons, to travelling all over the world via portals, which he must learn to fully grasp if he is to defeat Marvel Throwaway Villain #4682848 the corrupted sorcerer Kaecilius (Mads Mikkelsen) from – you guessed it – world annihilation.

Sure, it’s the standard Marvel formula that dates all the way back to the first Iron Man, right down to it being about the rich jerk who discovers a more meaningful purpose in life, but like with all the Marvel movies so far it is executed extremely well, so much so that honestly you’re not really caring a whole lot about that. You’re along for the ride because you’re enjoying these characters, the world of mysticism that it is introducing to us, and especially the sheer creativity that has gone into crafting this film. Director Scott Derrickson makes sure that none of that is lost in the overwhelming amount of exposition that the movie succumbs to, but in fairness it is the kind of exposition that is entirely necessary, because luckily we’re just as curious about how everything works as Strange is, so we find ourselves eager to learn more and become further fascinated by it instead of being bored, because if there’s anything that the world which Doctor Strange introduces isn’t, it’s “boring”. Much like the film, it’s fun, intriguing, and even rather funny at times (Strange later dons the “Cloak of Levitation”, and that’s all I’ll say about it for now).

The film displays astonishing visuals, some of the most vibrant and well-executed you’ll see in a big-budget blockbuster all year. From Strange’s very first trip into the psychedelic realms of infinite impossibility, which features the kind of imagery you’d normally see after two hours at a Burning Man event, it’s very clear that Derrickson and his army of talented VFX artists have crafted a world that is truly unlike anything we’ve seen so far in the MCU, and it is extraordinary to witness with all its eccentricities and unpredictable additions, from astral projections to M.C. Escher-esque redesigns of city backdrops. It also allows for some highly inventive action sequences that take as much advantage of this new mystic element as possible, including a climactic battle that puts a whole new spin on the standard destruction-heavy climax of a superhero film. It is some of the most creative action you’ll see all year, coupled with some of the most out-there imagery given to a major theatrical release such as this.

Cumberbatch dons an American accent for his role, and though there are times early on when it can be a little distracting you eventually get used to it and don’t let it overcloud his strong, textured performance here; his charisma and overly-confident swagger gives Cumberbatch’s Strange great presence here. Also standing out is Chiwetel Ejiofor, who plays a rather complex character by the name of Mordo (an enemy of Strange’s in the comics, but here an amalgamation of several characters from them), who is clearly struggling with an interior battle of morality throughout the film with every major revelation, and a powerhouse actor like Ejiofor perfectly nails the complexity of his character through subtle deliveries and expressions. However, other big actors like Rachel McAdams and Michael Stuhlbarg – as a nurse associate of Strange and a rival doctor, respectively – are mostly wasted in mere supporting roles, while Mikkelsen is, as stated earlier, just playing yet another stock Marvel villain, but luckily Swinton is there to pick up the pieces as an effective and awesome Obi-Wan Kenobi-type to Cumberbatch’s Luke (oh, and all those comments about whitewashing, since the Ancient One is traditionally of Asian descent in the comics? Sure, it’ll bother some people, but for the most part, she’s good in the role, which specifically labels her as Celtic and not Asian anyway. I mean, it could have been worse; they could have asked her to pull a Mickey Rooney and don the yellow-face and bucked teeth…).

From the moment that Doctor Strange was first announced, Marvel has been clear on its intention to introduce audience to an entirely new realm of the MCU, and with that they have largely succeeded. It packs the same amount of fun, humour and solid entertainment as any other Marvel movie, and is a worthy new addition to the line-up before the Guardians return next summer.

Doctor Strange successfully introduces audiences to an entirely new realm of the Marvel Cinematic Universe, using astonishing visuals to craft highly creative action set-pieces, a solid ensemble cast (despite the odd waste of a talented actor or two), and even though it sticks closely to the standard Marvel formula it adds enough new elements to keep it exciting and highly entertaining.