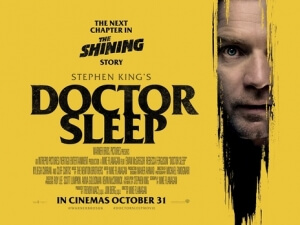 BASICALLY…: Years after his traumatic experience at the Overlook Hotel, Danny Torrance (McGregor) uses his special psychic powers to protect a young girl (Curran) with similar gifts from a sinister cult…

Making a sequel to a beloved classic is an immense challenge, because not only do you have to appease dedicated fans of the original, but it also has to stand well on its own merits. In the case of The Shining, Stanley Kubrick’s acclaimed version of Stephen King’s novel (acclaimed by everyone, except most famously King himself), it’s almost impossible; that film has a style, pace, and sense of ambiguity that truly is unlike most other horror films out there, and with the fierce combination of Kubrick’s tense direction and Jack Nicholson’s iconic performance as the crazed Jack Torrance, anyone would be foolish to try and follow it up with anything inferior.

“Challenge accepted,” thought director Mike Flanagan, after he signed on to bring King’s sequel novel Doctor Sleep to the big screen. The filmmaker is no stranger to King adaptations, following his well-received version of Gerald’s Game a couple of years ago, but this is the first time that Flanagan has tacked material that is so well-known to audiences that it’s completely unfathomable to hear the title The Shining and NOT think of the Kubrick film over the original King book (and especially the King-penned TV miniseries, but the less said about that one the better).

How does he fare? Well, Doctor Sleep is no The Shining – but that’s a very good thing. In fact, that’s what makes the film stand out even more, because it feels very much like its own thing while also feeling like it takes place in the same universe as the original film. This is, for all intents and purposes, a damn fine sequel and a damn fine movie in its own right.

Bar a brief prologue set after the events of The Shining, the movie takes place in the present day, when an adult Danny Torrance (Ewan McGregor), still traumatised by his experiences at the Overlook Hotel, lives a lowly life of alcoholism and isolation. He soon finds a way to use his special psychic powers to help some people, particularly dying residents in a care home (where he earns the moniker of the title), but he is also drawn in to some rather nefarious dealings. Those are due to a sinister cult led by a woman named Rose the Hat (Rebecca Ferguson), which feeds on the “shine” of several psychic persons as a way to regain immortality, and have now set their eyes on a young girl named Abra (Kyliegh Curran) whose powers are stronger than anyone’s. “Dan”, as he now likes to be called, must now help Abra stay out of Rose the Hat’s reach, using both their powers in ways neither of them could have imagined before.

Flanagan pays heavy homage to Kubrick’s film all throughout, with iconic shots being recreated or repurposed,  familiar music cues popping up, and even brief appearances by one or two major players (although the blatant recasting does throw you off a little bit at first). But beyond that, Doctor Sleep feels very much like a Mike Flanagan movie, with enough of the filmmaker’s own voice to overpower the influences of the legendary auteur. He gives the film a steady, contemplative pace which threatens to irk the audience’s patience – and at just over two-and-a-half hours long, it is longer than perhaps it ought to be – but keeps you entertained enough with some seriously eerie moments sprinkled throughout, even if it’s not entirely scary. There are shots that are made effective by Flanagan’s calculated direction as well as some stunning cinematography, both of which give the film its own unique identity that really stands on its own without the support of its much more famous predecessor.

It’s filled with characters who you’re interested in, and are fleshed out so much that you’re often shocked by how much you enjoy being in their company. Ewan McGregor – now completing his trilogy of films wherein he plays older versions of characters looking back on their youth, the other two being T2: Trainspotting and Christopher Robin – is a compelling Dan Torrance, so full of torment and weary of the dangers that come with his powers, all of which the actor uses to turn in a stellar performance. Matching him is young Kyliegh Curran, who in only her second film performance – and certainly her first major role – steals scenes from her far more experienced co-stars, and has great screen presence which makes her very likeable. The film’s unexpected MVP, though, is Rebecca Ferguson as arguably one of the year’s best villains; sporting an Irish accent, as well as that eponymous hat, she goes all-out to make this character both menacing and legitimately creepy, and the movie spends a lot of time with her and her followers to a point where you at least understand their perspective, even if they are doing very wicked things throughout. Ferguson does things with her character that also give her extra weight and more dimensions to play with, ensuring that this is not some forgettable baddie but someone who is certainly yet has an actual human side to her. It’s really cool seeing these actors bring such life to these characters, and they definitely help make the film a thrilling experience because you like every single one of them (albeit for different reasons) and want to see how things work out for them.

Some will certainly feel that this movie reaches far beyond its limits, and that by referencing The Shining so closely it automatically diminishes its own worth because it’s always remining you of an actual classic. The truth is, Doctor Sleep is not as instantly iconic as The Shining, but it knows that it isn’t; so, instead of trying to one-up a mastermind like Stanley Kubrick, it just does its own thing while also acknowledging its roots. If the film had been a straight-up copy of Kubrick’s style, then it really wouldn’t have been as effective, which is why it’s relieving that Mike Flanagan has inserted so much of his own voice into the film because then it feels like something different while also exploring familiar themes and characters. He has made a film that belongs comfortably within both the world of The Shining and his own filmography, and even more stunningly it works extremely well in each one of those instances; it’s not just a great sequel that dives further into the mythology while also expanding the world that had been previously established, but it is also a great standalone with a solid beginning, middle, and fan-service heavy end (but by that point, it feels well and truly earned) as well as strong visuals, likeable characters, and a real sense of warm heart and emotion that not even Kubrick’s film could entirely pull off.

Of the three theatrically-released Stephen King adaptations this year, Doctor Sleep is by far the best of them, and it is also up there among one of the best in years, but you don’t necessarily have to “shine” to figure that one out.

Doctor Sleep achieves the impossible by following up the classic Stanley Kubrick adaptation of Stephen King’s The Shining with a solid sequel that expands the themes and characters of the original, while working extremely well as an effective standalone that’s boosted by strong filmmaking by Mike Flanagan and some solid performances from the likes of Ewan McGregor and Rebecca Ferguson as one of the year’s best and most fleshed out villains.

Want to decide what the movie’s like for yourself?
Check out Doctor Sleep showtimes in London
via