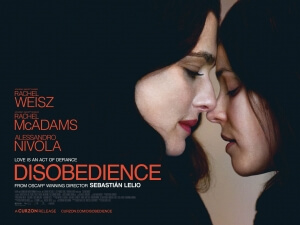 BASICALLY…: Ronit (Weisz) returns to her strict Orthodox Jewish community and reunites with her childhood friend Esti (McAdams), igniting a passionate affair between them both…

Fresh from scoring the Foreign Language Film Oscar earlier this year for A Fantastic Woman, Chilean filmmaker Sebastián Lelio makes his English-language debut with a film that also explores LGBT relationships, only here there’s a heavy emphasis on the L.

Disobedience, based on the novel by Naomi Alderman, is an intimate, gently paced and exceptionally acted story of forbidden love within a tightknit community, and a fine example of Lelio’s carefully constructed filmmaking that puts heavy emphasis on the characters and the strong emotions they are feeling. Anyone who managed to catch A Fantastic Woman in the cinema – as I was, earlier on in the year – will know this already about Lelio, but he truly brings life and gentle passion to a story and setting that is rooted in tradition, and isn’t afraid to make some daring decisions that help separate it from others like it.

The story begins when Ronit (Rachel Weisz, who was also a producer on the film), a photographer living in New York, receives word that her estranged rabbi father has suddenly died. She returns home to her Orthodox Jewish community in North London to pay her respects, but finds that not many people are eager to see her, having been ostracised from the community some years prior for an affair she had with another woman. Nonetheless, she is welcomed by her old childhood friend Dovid (Alessandro Nivola), who is tipped to replace Ronit’s father as the community’s new spiritual leader, but she is upset by the fact that Esti (Rachel McAdams), the woman she had an affair with, is now Dovid’s wife. As Ronit struggles to fit back in to a community that seems to want nothing to do with her, the sparks between her and Esti are reignited and they soon start back up their passionate love affair, but at what cost to Esti’s straining marriage to Dovid?

The way that Lelio constructs the film is to firmly focus on the events at hand – not once do we suddenly cut to flashback of the two women in their younger years carrying out their affair – and expect the audience to pick up on everything that happened before we meet these characters, based on how they act, what they say, and why they do it. It’s a construct that works, in part to a concise script that doesn’t spoon-feed us all the information at the same time, subtle direction that indicates altering moods and character growth, and especially some sublime acting by the leading trio that is really quite perfect for these parts. The two Rachels of the film, Weisz and McAdams, share a bountiful chemistry that becomes fiercer and fiercer as they become reacquainted in the Biblical sense during one passionate love-making scene, but each have moments which show a quiet disparity in both their characters, with McAdams’ character being much more reserved and uncertain of her true self than Weisz’s more outspoken persona, which they excel at individually. Meanwhile, you have Nivola, a character actor who’s been in a wide variety of films and genres like American Hustle, The Neon Demon, Mansfield Park and even Face/Off, giving a truly solid performance here as the scorned third-wheel in this love triangle, yet Nivola never treats his character like the bad guy but rather just someone so stuck in his ways of life that his traditions have clouded his better judgement. His character probably has the biggest arc in this movie, and it is both written and especially acted in a way that such an important character deserves in this story.

Lelio recognises this too, making the character a living and breathing representation of this small and stubborn Orthodox Jewish community, which refuses to accept anything that is outside the comfort of their religion, and are thus blind to the concept of free will and thinking outside the box. Even though there are many characters the main ones come across that treat this outsider with passive-aggressive contempt, at the same time they too are not outright evil; like Nivola’s character, just people who cannot seem to overlook the traditions in which they were raised, and seem to resent Weisz’s character more for the fact that she just bailed on them and never looked back. Instead of making them unfeeling and stubborn busybodies – though there are one or two people who quite rudely stick their noses into the main characters’ business at times – Lelio doesn’t antagonise these people; if anything, the insecurity comes far more from the three main characters, who all struggle to fit in to this community in their own unique ways, and make it even harder for them to do so by the choices they make throughout. It would have been so easy to give a story like this a group of villains for the audience to root against in this tale of people that found love in a hopeless place (thanks, Rihanna), but Lelio is a smart enough filmmaker to know that the focus must always be on these three leads who each act as heroes and villains in their own right, which makes their dynamic a lot more interesting and certainly more emotionally-driven.

This isn’t the kind of movie that’s going to win everybody over – I can see people getting a little antsy over its deliberate slow-burner pace, as well as its unconventional approach to a love story like this – but those that stick with it will find this to be an intelligent, racy and extremely well put-together character piece that features a trio of great lead performances and a filmmaker who more than knows his stuff, enough so to bring his Chilean roots to a very English story.