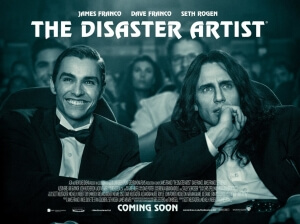 BASICALLY…: Struggling actor Greg Sestero (Dave Franco) develops a friendship with the eccentric Tommy Wiseau (James Franco), and together they make a movie called The Room which soon goes down in bad film history…

If you have yet to see the awful masterpiece that is Tommy Wiseau’s The Room, then I highly recommend that you do. Don’t let its infamous reputation of it being “the Citizen Kane of bad movies” put you off, for it is perhaps some of the most entertaining ninety minutes of horribleness that you could possibly spend. Everything about it from the direction to the acting to the writing and even the simple placement of certain props is completely against what one would normally consider competent filmmaking, yet its ineptitude in almost every field makes it something that you have never seen in a motion picture before; a complete failure that somehow remains watchable because of how unintentionally funny and surprisingly lively it is. If you can track down a copy of this film, then take that chance and be proud that you have among your collection a true example of so-bad-it’s-good cinema.

It’s definitely worth seeing if you’re also planning to see The Disaster Artist, which is based on the book of the same name which itself documents the bizarre making-of story of The Room and the tempestuous relationship between one of its lead actors Greg Sestero, and the walking enigma that is Tommy Wiseau. Even if you haven’t seen it, go along and see what is easily one of the funniest, most heartfelt, and all around best movies of the year.

The film begins in the late 90s when Sestero (Dave Franco), a nervous young actor, crosses paths with a strange, long-haired and ambiguously accented man in one of his acting classes. That man is, of course, Tommy Wiseau (James Franco) who soon strikes up a friendship with Sestero and even invites him to be his roommate in his empty LA apartment, mere days after meeting him. When both try to break the acting circuit of Hollywood to varied success – or, in Tommy’s case, none at all – they come up with the idea to go ahead and make their own movie, which Tommy then proceeds to write and, using his unexplained wealth, buys all the equipment and studio space as well as hiring actors and crew, despite not even knowing how movie sets work for the most part. Principal production begins in earnest, but Tommy’s wildly eccentric direction and acting choices begin to take a toll on the crew, as well as Sestero himself who slowly unearths the insecure and desperately lonely monster within his friend.

While I’m on the subject of recommending things related to The Room, you should definitely check out the actual book of The Disaster Artist, which offers a unique and often hilarious look into how this odd movie came together, as well as a bit more about the questionable nature of Wiseau’s character and how co-author Sestero sees him as, despite his flaws, “the grandest and most sincere dreamer I’ve ever known” (you can find it in bookstores, or online). The book, naturally, serves as the basis for the film, which James Franco also directs and produces with (500) Days of Summer writers Scott Neustadter and Michael H. Weber on adaptation duties; their screenplay takes a few more liberties with the story, or at least how Sestero and co-author Tom Bissell interpreted it, but they nevertheless morph it into a winning crowd-pleasing narrative that allows us to laugh as well as be emotionally invested in its characters. Like Sestero in the movie, you can’t help but be attracted to the mystery and laid-back nature of Wiseau, and even more bizarrely you truly connect with him and his overall vision for his cinematic magnum opus, no matter how wrong it may be in practise. Additionally, you’re on Sestero’s side as you’re seeing it from his perspective, and luckily his is a likable and calming set of eyes to see this whole thing unfold from, and the writing really allows the character to open up and not just be reduced to a wide-eyed innocent lurking from the corner.

It is this central relationship between Tommy and Greg that serves as half of the film’s heart (more on the other half later), and it works so well not just because of the solid script and tight direction on James Franco’s part, but because both Franco brothers are doing some of their very best work on-camera with this movie. Dave Franco has been slowly climbing the ladder for a while now, and despite some severely broken steps – *cough*Unfinished Business*cough* – he’s finally reached the top in a performance that proves he can just about carry a movie based on his natural boyish charm. Even then, however, he’s still overshadowed by his older brother; James Franco, as the disaster artist himself Tommy Wiseau, is perhaps the actor’s greatest on-screen accomplishment to date, perfectly mimicking the real Wiseau’s unidentifiable accent and severe lack of acting or filmmaking skills, but also his undeniable passion and lust for life which clearly drives him through every waking moment. Franco is utterly fearless in the role, completely embodying his character’s eccentricity and burning desire to stand out in a crowd, even going so far as to spend the majority of a scene with his bare ass on full display, only his has far more reason for being on celluloid than Wiseau’s posterior ever did, and he is completely magnificent in every scene; it would be some kind of poetic justice if what is regarded as one of the worst performances of all time in one of the worst movies of all time could inspire something that could actually win some prestigious awards this coming season – he’s THAT good.

However, one of the absolute best parts about this movie, and why it is not only one of the best films of the year but also far from being just another Ed Wood or Florence Foster Jenkins, is how it serves as a genuine love letter to audiences that have stuck by this film since its premiere. The final few scenes are an incredibly powerful example of that, and how they can truly embrace something that was never meant to be adored for the reasons that they do. If you ever go to one of those special screenings of The Room at The Prince Charles Cinema – which, again, I seriously recommend you do – then you will see just how much everyone loves to laugh and have a good time while watching it, and what The Disaster Artist manages to do that’s quite brilliant is fully embrace The Room’s status as a cult movie and how it, even at its most horrible, can put a real smile on someone’s face, lending it an ending that’s incredibly beautiful to watch, and no less inspiring. Anyone who has ever thrown a football or flung plastic spoons into the air or even just quoted along with the film’s memorably awful dialogue will absolutely adore this film, and as one of those people so did I.

Even if you have not been fortunate enough to check out The Room, your ideal choice of viewing should still be The Disaster Artist, a funny, endearing, powerfully acted and immensely heartfelt tribute to a strange man whose even stranger vision inspired a cultural phenomenon. *adopts Tommy voice* Anyway, how’s your sex life?

The Disaster Artist is a very funny and emotionally heartfelt love letter to the so-bad-it’s-good nature of The Room and its mysterious figurehead Tommy Wiseau, played in a career-best performance by James Franco. This is easily one of the best films of the year.