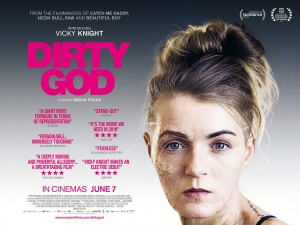 BASICALLY…: A young mother (Knight) struggles to cope with her life after falling victim to an acid attack…

As the conversation gets stronger about the inclusion of more actors with physical and mental defects, an actress named Vicky Knight is worthy of the argument for their increased presence in the industry.

At the age of eight, Knight was staying in a pub owned by her aunt and uncle, when a fire broke out and left one-third of her body deeply scarred. The fire would sadly claim the lives of her two young cousins, as well as that of the brave soul who risked his life to save Vicky from the burning building, but ultimately it was Vicky who’d been dealt the biggest blow; growing up with severe burns, she was prone to bullying at school, suffered not just from PTSD but also depression as a result of the traumatic incident, and did not receive professional help to help her overcome her overwhelming low feelings.

However, it wasn’t until a video she made and uploaded on social media about her experiences attracted the attention of director Sacha Polak, who was seeking a lead actress for a film she was developing about an acid attack survivor. Although Vicky did not have any prior acting experience, she nonetheless decided to go for the part, and she has gone on to win acclaim for her extraordinarily natural and utterly heartbreaking performance, all of which is earned as her performance truly is something special, right along with the movie itself.

Dirty God sees Knight play Jade, who’s just come out of hospital after being treated for an acid attack by her vengeful ex-boyfriend. Her attempts to readjust to life prove difficult with her new burns, with her infant daughter screaming every time she sees her mother, people looking at her from all angles whenever she goes on a night out, and is prone to hurtful comments from people that don’t know anything of what she’s gone through. Nonetheless, she remains determined to make her life as smooth-sailing as it once was, and when she catches wind of a clinic in Morocco who can treat her wounds and possibly make her look attractive again, she does all she can to afford the treatment while also focusing on her other responsibilities as a single young mother.

It is a daunting subject matter, but the film doesn’t entirely wallow in the pools of its own self-pity; on several occasions, it springs to life with some empowering episodes of confidence and sexual liberation, with the lead character herself actively going out of her way to try and not let her burns define who she is. Early on, we see her clearly have fun drinking and smoking with her friends, going out to clubs where she gets to flirt with her best mate’s new squeeze (played by a dashing Bluey Robinson), and even signing up for a webcam site where she gets to chat and masturbate with other people. Because of Knight’s charisma in the role, these moments are made more enriching with plenty of added optimism, which prevents it from being a complete bummer to sit through from start to finish, and her delivery is so natural that it adds a truly authentic tone to an already pretty grounded story. For someone who has never acted before, she does one hell of a job at conveying the character’s knocked confidence and insecurity about her appearance, even delivering some pretty hard-hitting monologues about how her infant daughter reacted upon seeing her scarred-for-life mother for the first time.

Knight is very much in director Polak’s thoughts the entire time, and the Dutch filmmaker – here making her English-language debut – brings out her inner Andrea Arnold and Ken Loach to bring us a tough-as-nails depiction of working-class life in London to compliment her feisty lead actress. It’s no different to how this particular environment and its citizens have been depicted before, probably because most of those representations are largely accurate portrayals of life in the London suburbs, but Polak injects things with enough naturalism and realistic energy that makes it grimy but undeniably appealing to wander around in. When she moves the action to Morocco for an emotionally-charged third act, the intimacy levels are turned up a notch as characters get closer to each other in a physical sense, and the warm, almost unbearable heat – Jade resorts to going inside and staying cool instead of lay by the pool, despite applying an eye-opening amount of sun cream to her skin – serves as a nice backdrop to a sizzling dynamic that’s just dripping with sexual tension.

Despite a couple of narrative hiccups – the truth about this clinic Jade hears about is a little too obvious, and a love-triangle sub-plot isn’t entirely resolved – the movie is an effective, very emotional and hard-hitting movie about a woman’s struggle to move on after having her life changed forever. It’s a brauva performance by Vicky Knight, who I truly hope doesn’t let her real-life scars get in the way of deciding what kind of roles she wants to go for next, because it would be truly wonderful to see her in more films, but also due to how much confidence she now appears to have in herself. If you see her in interviews, or are even lucky to come across her in person, you can sense that the shy and introverted young person that once occupied her body is all but gone, and in her place appears to be a fully-assured woman that has decided to wear her scars like a badge of honour, and this film has clearly done wonders for her self-esteem and overall mental health which makes it all the more inspirational.

She’s come a long way in life so far, but hopefully this is just the start of Vicky Knight’s journey towards becoming a true star.

Dirty God is a gritty and emotional look at a young woman’s attempts to cope after an acid attack, in a film that is delicately told by director Sacha Polack and phenomenally acted by debuting actress and real-life burns victim Vicky Knight.

Check out Dirty God showtimes in London
on Walloh.