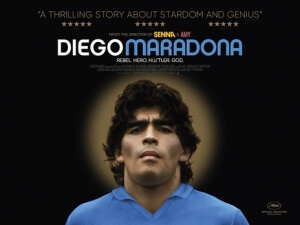 BASICALLY…: The controversial life and career of international football star Diego Maradona is explored through interviews and exclusive footage…

He’s a living legend in the world of football, but to anyone who can’t tell you the difference between Manchester United and Liverpool if they tried, someone like Argentinian player Diego Armando Maradona is a complete obscurity. Even I have to confess, it wasn’t until I started doing research on him before seeing this movie that I realised he wasn’t Italian, as was suggested by the fact that he played exclusively for Naples during the high point of his career.

But even if you are someone who has zero interest in the sport, and probably spent the whole of last summer’s World Cup cringing every time that bloody “Three Lions” song came on the radio, you should definitely go and check out Asif Kapadia’s fascinating examination of a man trapped in the pitfalls of mega-stardom.

The Academy-Award winning director of Amy and Senna returns with what is being described as the third part in his unofficial trilogy of documentaries that focus on rather tragic figures in the public eye; in this case, of course, it’s Maradona’s story we witness unfold, through some nifty editing that skims through hours upon hours of archive footage, and several voiceover interviews with several key figures in his life, including some soundbites from the man himself. It focuses largely on Maradona’s then-record £6.9 million transfer to Napoli’s football team in 1984, where he managed to win the hearts of Italian football fanatics through his incredible skills with a ball, so much so that following victories in the World Cup and home championships he was basically declared a living god. However, the film also charts his lesser moments, including his cocaine addiction, his questionable ties to local mob figures, and one of many scandals that saw him be publically named as the father to a lover’s infant son.

In an early montage showing Maradona’s brief tenure as a player for Barcelona, we see an interview with legendary footballer Pelé – someone that Maradona is constantly being put in the same category as – who very openly declares that the young up-and-comer “isn’t psychologically prepared yet” for the intense fame that’s about to come his way. As we see throughout the course of the film, Pelé’s words seem almost prophetic; the level of adoration and worship that is being heaped onto the guy is shown to be beyond excessive, with fans clamouring outside his home for an autograph and even some of his blood making its way into a church, so it’s little wonder why Maradona would eventually turn to drugs and debauchery if there was this kind of pressure to try and deal with. Kapadia and editor Chris King take this concept and use it to structure the film almost like a prison movie; Maradona is metaphorically chained to his position on Napoli’s football team because he’s way too good of a player to just be let go from the team, and he’s too big of a star to simply disappear from the spotlight, so he’s effectively sentenced to an increasingly miserable existence of always being in the public eye, which even then doesn’t seem certain because – as we later see during a fatal World Cup clash between Italy and Argentina, with Maradona playing for the latter – he can go from messiah to pariah in a matter of moments among his own adoptive home of Naples.

Outside of sharing the same director, Diego Maradona also shares structural and thematic DNA with Amy; both movies are about the pitfalls of fame and the psychological damage it can inflict onto the person at the centre of it all, both of which are conveyed exclusively through archive footage that offers raw and unflinching glimpses of the respective subject matters behind closed doors. Between the two, I’d say Amy is perhaps the stronger movie only because it had a few more stand-out sequences than this one did, but this is still a very well put-together film that offers the audience an insightful look at the life and times of a very celebrated – some would say, overly so – football legend that was slowly crumbling in front of our very eyes, yet barely anyone did anything to intervene because he was just too damn good at what he did. I appreciate Kapadia’s style of storytelling through his films, which are conveyed almost exclusively through the archival footage and seen-but-not-heard interviews with several figures throughout the subject’s life, keeping the focus pretty much entirely on the events as they happen. Here, it’s done in a very engrossing manner because, unlike Amy Winehouse who is perhaps a more universally recognised figure nowadays than Diego Maradona is, his story is not as familiar with audiences so to have it portrayed for us not through dramatized re-enactments but from footage of said events happening in real time, it’s rather exhilarating to watch.

Like I said, you don’t even need to be all that into football to appreciate the level of filmmaking and storytelling that is on display here; you learn so much about this guy yet you’re never entirely sure which of his two personas – the humbler and more shy “Diego”, or the more rambunctious and unpredictable “Maradona” – is in full control at any one time, which is a cunning little trick to keep us fully engaged so we may later find out which is the one to be feared, and which one should be revered. Either way, you are completely transfixed with how these filmmakers have captured the complicated life of a very complex man, and it makes you want to learn even more about this strange man and what else he may have contributed to the world, outside of his undeniably impressive football skills.

Diego Maradona is a captivating portrayal of a very complex public figure that, much like director Asif Kapadia’s previous film Amy, deals with fame and excess in a stunningly captured manner, which incorporates archival footage to tell this heavily engrossing story for audiences who may not know a whole lot about the man himself.

Check out Diego Maradona showtimes in London
on Walloh.