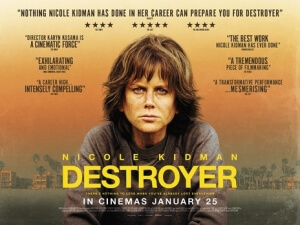 BASICALLY…: A beleaguered police detective (Kidman) hunts down a vicious figure from her past…

The last few months have really been quite the blessing for Nicole Kidman, as she not only featured in box office hits like Aquaman and The Upside, but she also received some of the best reviews of her career for her performances in dramas like Boy Erased and the movie we’re going to be talking about here, Destroyer. She’s a great actress and a true movie star, entirely deserving of the succeses she’s just had, but her performance in Destroyer suggests something even better about her: she is one of those actors who is just unafraid to let go of vanity and go to the darkest of places in order to bring out one hell of a haunting performance, in a movie that pulls no punches and simultaneously makes you uncomfortable as well as humbled.

Kidman plays Erin Bell, a police detective who we first see stumbling onto a crime scene looking so dishevelled as though she’s hasn’t slept for weeks. The corpse at the scene is covered in a few dye-soaked dollar notes, which causes Erin to immediately know who’s behind the murder: a gang leader named Silas (Toby Kebbell) whose squad Erin went undercover in some years ago with fellow cop Chris (Sebastian Stan) in a sting that left her a broken woman. Now that she has a chance to find Silas after so long and exact vengeance, Erin goes around Los Angeles finding out what information she can, in whatever manner she deems fit, on his whereabouts, while also reflecting on her past relationship with Chris as well as her troubled connection with her teenage daughter Shelby (Jade Pettyjohn).

This movie is the textbook definition of a bleak and gritty cop drama; the main character is a vengeful anti-hero who’s got some severe flaws and a harsh backstory, while the criminals are seedy, psychotic and unapologetically murderous as they go around committing some sickening acts. The tone is incredibly dour throughout, portrayed through numerous scenes of an embittered Kidman staring into space with a permanent frown on her face, and there is just a lingering sense of doom and gloom all throughout with a Los Angeles that’s depicted like it’s a post-apocalyptic wasteland, where everybody has their demons they frequently tend to. It’s a harsh, dour and seemingly relentless world in which this movie takes place in, and that’s exactly what makes director Karyn Kusama’s film so compelling, and even unexpectedly inspiring. Kidman’s character is not an especially heroic figure, as she does things that are completely against her job description such as mercilessly beating information out of someone, and also partakes in some very unflattering exercises just to get what she wants – she begrudgingly gives a dying former gangster a handjob so she can get a lead – not to mention the fact that she’s a drunk, a hard-ass, and completely incapable of displaying the simplest amount of empathy. Yet, through a mixture of intense direction, hard-hitting (though not always focused) writing, and especially a truly incredible performance by Kidman, her journey of revenge and self-reflection is shown to be a bright spot in this dark and unforgiving environment, as through the hidden message of the film is that no matter how bleak things may look, and it should be emphasised just how much of this movie really is so dark and gritty, there is always a glimmering light in the distance that makes you hold out hope for better things on the horizon.

Fans of dark and gritty cop films like The French Connection or even Bad Lieutenant: Port of Call New Orleans are probably going to be more susceptible to this film than a lot of other people, which is a fair statement because this movie is most certainly not made for people wanting to go and watch a crowd-pleasing romp. The movie certainly has a grimy edge to it that you don’t see a lot of nowadays in most streamlined crime films, which is certainly going to be the biggest draw for some people in addition to Kidman’s fantastic lead performance, but Destroyer tends to sometimes falter when it goes a little too overboard with some of its harshness. The structure is split into two, with one timeline focusing on Bell in the present as she’s hunting down Toby Kebbell’s gang leader, and another which sees a younger Bell and her partner (in a professional and, later, a personal sense) played by Sebastian Stan going undercover in this gang, both of which don’t always blend as well together as it wants to since the flashbacks could easily be placed anywhere in this film and not much during the present would change. Terrible stuff happens in those scenes as much as the ones set in present day, so it doesn’t make a whole lot of difference when we suddenly cut back and forth between timelines, as there’s not a whole lot to distinguish themselves from each other. That’s really only a minor complaint about the film, and so are my thoughts on a more predictable sub-plot that sees Kidman’s character try to connect with her teenage daughter, who’s romantically involved with an utter douchebag who’s significantly older than her, but I feel it’s important to note that not everything about the movie works, even if it’s just the most minor of niggles I had with it.

The top reason to see this movie is just to see Kidman go to the absolute depths of her soul to give a truly haunted performance, which she very much does in some of the most ferocious and hard-skinned pieces of acting that she has yet given, with the second-to-top reason being that it’s a pretty solid cop drama that’s as gritty and bleak as you can get, which should be more than enough for people wanting a return for this type of procedural in movies.

Destroyer is a bleak and gritty cop drama that will certainly please fans of dark and unflattering crime flicks like The French Connection, which sometimes goes a little too overboard with its incessantly grim tone but makes up for it by a truly astonishing performance by Nicole Kidman, who gives some of the most intense and hard-boiled pieces of acting that she has ever given in a film.