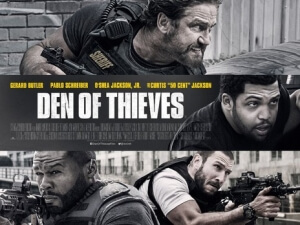 BASICALLY…: An elite group of County Sheriff Deputies, led by corrupt cop Nick O’Brien (Butler), aim to stop a group of thieves from robbing the Federal Reserve in Los Angeles…

Ever since Michael Mann’s Heat came out, filmmakers have been trying ever since to make a crime movie that was just as epic and instantly classical, but aside from perhaps Christopher Nolan with The Dark Knight, a lot of them have come up short, mostly by just using stock characters and clichéd plots that not even Heat considered touching.

That being said, while Den of Thieves – the latest effort to replicate Heat’s success by debut director Christian Gudegast, the writer of A Man Apart and London Has Fallen – is still nowhere close to being as instantly iconic as Mann’s film, there’s a fair chunk of it that’s admirable to say the least, mainly for its sheer ambition to go the whole hog in being as epic as its budget can possibly stretch.

Set in Los Angeles, the film covers both sides of an investigation into a criminal gang of robbers and the attempts to stop them by the LAPD. On one side, you have the thieves which include ringleader Ray Merrimen (Pablo Schreiber) and associate Levi (Curtis “50 Cent” Jackson), who are just trying to go about their business and in Levi’s case looking after his family whilst simultaneously planning a major heist of the seemingly-impossible Federal Reserve which houses over $30 million in unmarked bills. Meanwhile, you have the County Sheriffs led by sleazy cop Nick “Big Nick” O’Brien (Gerard Butler), who are just as morally corrupt and menacing as the people they’re targeting, if not more so, but are dead set on taking down the robbers at any cost. Caught in the middle of it all is young getaway driver Donnie (O’Shea Jackson Jr), who is intimidated by both sides in very different but equally effective ways, and he as well as Big Nick, Merrimen and Levi all have big parts to play in the eventual clashing of egos and senses of righteousness during the big heist itself.

Den of Thieves won’t, and was never really going to, earn points for originality, but it makes up for that with its sheer dedication to making it feel as epic as it can, complete with an extended near two-and-a-half hour running time, and several intersecting characters and storylines that make each one of these characters seem like more than just their paper-thin archetypes. We spend a lot of time seeing what Big Nick’s life is like, what his family life is like (spoiler alert: it’s not good), and how he functions as just this bad dude by insulting people in his job, torturing suspected criminals, and having sex with strippers without a care in the world; likewise, when we see things from the criminals’ point of view, they are just ordinary people with families and loved ones to look out for who also just happen to have taken a very dark path along the way. Gudegast could easily have cut a lot of this material out to get it down to a more digestible running time, but the fact that he didn’t helps the film even more as it presents these characters as people we’re interested in as opposed to being one-dimensional stereotypes we’ve seen in countless other films, and while they may not be the best-written characters in these type of gritty crime movies they’re far and above beyond the average. That, coupled with the fact that the acting is solid from everyone – highlights including Butler, who goes all out in a role that mercifully allows him to act every once in a while, and Jackson Jr, who is really beginning to come into his own as an actor after first impressing as his dad Ice Cube in Straight Outta Compton – is enough to really get you invested more than any other schlocky crime thriller in recent years.

As a first-time director, Gudegast shoots the film like it’s a hybrid of both Mann and Tony Scott, from the loud and often violent shootout scenes to the sun-lit backdrops of Los Angeles creeping in on the tension being built from the scene. It’s fairly well shot for this kind of movie too, and props to Gudegast for hiring a competent cinematographer to shoot his action scenes in a way that makes it clear what’s going on, whereas with his last scripted credit London Has Fallen – which he didn’t direct, but the guy who did could learn a lesson from his own writer – you could barely make anything out at all. Overall, he proves himself to be a fine director who can get actors to do the best that they can, like Butler who again shines in a rare opportunity to show the world that he’s more than the gruff action guy from 300, and while his script certainly did not need to be as long as it is, it’s filled with good character moments that make the extra minutes just fly by. It especially kicks into gear during the second half of the movie, which mostly takes place on the day that the robbers are planning their big heist of the Federal Reserve, and while a lot of the twists and turns it takes are things that you’ve seen in other crime epics, it has a tense and emotional edge to it that makes it far more entertaining. The majority of the main characters by that point have been given enough time to shine and seem like real people, so you’ve got people that you’re rooting for on both sides and just as nervous if or when they get what’s coming to them.

Let’s make it clear, Den of Thieves is absolutely not going to be regarded in the same way as Heat is; there are parts where it gets too ridiculous for its own good, with a final twist that doesn’t make a whole lot of sense, and some of the violence can easily put people off for its sheer brutality. However, that’s not to ride it off entirely, because as flawed as it may be there is genuine ambition that went into the making of this, which is something to be admired for something that could have easily been just another throwaway Gerard Butler action vehicle. At the very least, it’s way better than the last Gerard Butler movie that came out…

Den of Thieves is a crime epic that doesn’t quite reach the levels of greatness of its most obvious influence Heat, but the script is filled with enough strong character moments and solid actors portraying them that it just about makes up for the extended running time.