Deerskin (Review) – Jean Dujardin Gives In To The Velvet Madness 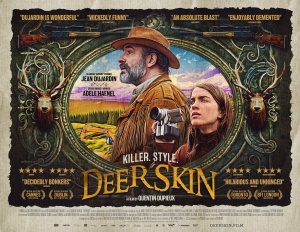 BASICALLY…: A man (Dujardin) becomes obsessed with his new deerskin jacket, which quickly turns into something darker…

For me, perhaps the most bizarre thing about Deerskin – which is already a rather bizarre film – is that this is not my first viewing of it. I caught a press screening of it back in 2019, when it was scheduled to play at that year’s BFI London Film Festival, and was commissioned to write a review of it for another publication – however, plans for that fell through, and so I was left having seen a film that I wasn’t able to write a review for (I couldn’t even do one for this website, because I had already made the deal with the other place).

With that in mind, seeing this film again after almost two years was strange, because while I knew pretty much everything that was going to happen, a lot of it still came as a surprise to me because I had honestly forgotten how weird this movie is. It’s a good kind of weird, though, with a suitably bonkers premise and an even kookier lead performance, but it’s still weird nonetheless.

The premise of the movie is that a man named Georges (Jean Dujardin), a middle-aged man who’s just left his wife for mostly vague reasons, purchases a second-hand 100% deerskin jacket with virtually all of his savings. Georges is instantly smitten with how good he thinks he looks in the jacket, and checks himself into a remote hotel where he can do nothing but admire his prized piece of designer clothing. Having also been given a digital camcorder during his purchase, he manages to convince some of the locals, including bartender and aspiring editor Denise (Portrait of a Lady on Fire’s Adèle Haenel), that he is a filmmaker in town shooting his new film, even though he has absolutely no idea what kind of film he is making, let alone how to even make one at all. Soon, though, as Georges’ obsession with the jacket grows – to a point where he even begins having entire conversations with it – he sets out to achieve, and film, his goal of being the only person in the world to own a jacket, which eventually turns into a far deadlier mission.

As weird and out-there as Deerskin is, it is also perhaps this director’s most accessible film to date. Keep in mind, writer-director Quentin Dupieux (known in some corners by his DJ name Mr. Oizo) has thus far made a career out of extremely odd movies that have intentionally failed to connect with more mainstream audiences, on account of their absolute weirdness; his most infamous film is a B-movie named Rubber, in which a car tyre named Robert comes to life and starts killing people (and funnily enough, that’s probably the least strange thing about that movie). The fact that Deerskin feels much more catered to a wider audience is a minor achievement for the filmmaker, but not even that can deter him from inflicting his own brand of odd, deadpan humour onto an already strange premise, which doesn’t so much alienate the viewer but more so leaves them bewildered and confused just by its straight-laced nature alone.

It’s both an easy and difficult film to dissect, because you can tell what kind of satirical themes it’s aiming for, but you’re also left somewhat striving for answers as to what its overall point is. The “film” that Georges is making ultimately gets so lost in interpretation – Denise theorises that it is a deep exploration of the shells we hide behind in society, when in reality it’s just a loose series of shots Georges filmed as he’s admiring himself with his deerskin jacket on in the mirror – that even when there is filmed evidence of this mentally-ill man committing some rather brutal crimes with a sharpened ceiling fan blade, her passion for the project is strengthened further. Dupieux clearly has fun jabbing at the fact that there is such a thing as having too great a passion for movie-making, and also manages to work in some dry commentary on the nature of male narcissism (Georges is rarely ever seen not admiring his jacket, or any of the other deerskin items he picks up along his increasingly deranged journey), but this being the kind of dry, deadpan movie that it is, there seems to also be an all-too reserved attitude towards analysing its own reason for being. The characters in this movie face almost zero consequences for their actions, no matter how despicable or deadly they may be, and just when it seems as though things are about to finally head toward some kind of point, it pulls what can only be described as a massive troll ending to further implement its own apparent lack of reason.

A movie like Deerskin would be quite difficult to sit through if it weren’t for the firmly committed turns by its lead actors, who seem to be fully aware of the bizarre project unfolding around them, and do their best to steer things towards a slightly more human approach. Jean Dujardin, having retreated largely into homegrown French projects following his Oscar-winning turn in The Artist, does all too good a job at playing a man so pathetic and so driven by his warped ego that his damaged psychosis is enough to convince himself that his rather ugly-looking deerskin jacket is the greatest thing in the world. The actor dives comfortably into his character’s weird-as-hell mental breakdown, all while giving glimpses of humanity instead of succumbing entirely to the deadpan nature of Dupieux’s script and direction. Adèle Haenel, too, is noteworthy in a more straightlaced (though not by much) role that requires the actress to also lose her own sense of grounded reality as she gets more and more sucked in to her co-star’s directionless vanity project, to a point where she starts making extreme decisions in order to keep funding its production. Both of them, in their own weird way, utterly give in to the madness of this movie but also acknowledge that there is still a twisted sense of humanity buried underneath its velvety layers.

Having now seen this movie twice over, and being perplexed but also morbidly fascinated both times, it’s hard for me not to respect the (odd)balls on this movie to really go to some weird and bizarre places just for this strange but surprisingly enjoyable premise. It’s not the most comfortable viewing, but like its main character you’re weirdly entranced by Deerskin and its utterly bonkers style.

Deerskin is a bizarre but enjoyable dark comedy that plays around with satirical themes in its own oddball manner, but its lack of apparent point is saved by dedicated lead turns from the likes of a firmly committed Jean Dujardin.

Deerskin will be released in UK cinemas on Friday 16th July 2021 – click here to find a screening near you!