Dear Evan Hansen (Review) – Is It Really As Bad As Everyone Says? 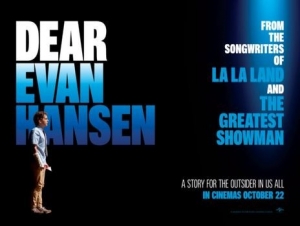 BASICALLY…: A high school student (Platt) with social anxiety becomes drawn into the family of a fellow student who committed suicide…

Let’s get one thing out of the way early: yes, Ben Platt is way too old to be playing the title role in Dear Evan Hansen. Sure, he originated the role in the original Broadway production, but that was six years ago when the now 28-year-old actor could perhaps get away with playing a high school student, and now he just looks out of place when acting opposite performers who are much closer in age to their characters.

That being said, while you could argue that he is perhaps miscast in the part, he actually doesn’t do that bad of a job. In fact, he is quite good in this movie adaptation of the hit stage musical; his singing is top notch, and he does nail the character’s numerous tics and quirks down to a near faultless tee. So, when I see everyone up in arms about the mere fact that the lead actor is older than he should be for a part like this, it makes me roll my eyes somewhat, because he is a very talented performer who does rather strong work here regardless of his age, and I wish everyone would get off their high horses and at least acknowledge that his performance is overall just as good as it presumably was on the stage.

The rest of Dear Evan Hansen, though? That’s a bit more open for debate, because despite some well-written songs and intentions that are clearly noble, the movie as a whole is a little misguided in how it deals with some pretty severe topics.

If you’re not familiar with the source material, the musical introduces us to Evan Hansen (Platt), a high school student who suffers from social anxiety and is undergoing therapy after an incident with a tree leaves his arm in a cast. One of his therapeutic assignments is to write letters to himself, but one of them ends up in the hands of school outcast Connor (Colton Ryan), whose sister Zoe (Kaitlyn Dever) is the girl that Evan has a crush on. Things change when Evan learns that Connor committed suicide, and that Evan’s self-penned letter was found on his body, which his parents (Amy Adams and Danny Pino) mistake as being directed to Evan himself from Connor. To appease the heart-broken family, Evan invents a friendship between him and Connor which ends up inspiring not just the family but other people at school to see the previously ignored Connor in a different light, but eventually Evan struggles to control the fantasy for much longer.

Now, you can make the very reasonable point that what Evan Hansen does isn’t exactly the most appropriate thing – in some extreme cases, you could see it as being utterly cruel towards this grieving family – but the film does allow you to understand why he does what he does, and while you might not agree with his decision it at least offers you to see things through his perspective. The character is never maniacal or even that unlikeable; you can tell that he has been written to be a decent, if flawed, person who makes a radical choice to give this family, who really didn’t know their son/brother all that well, a chance to see him in a more favourable light, and things do escalate to a point where it does start helping other people with their own anxieties and even organising a fundraiser to rename an orchard in Connor’s name. The musical numbers are good at moving the story along at a reasonable pace – though it still could have used some trimming, since it comes in at an overlong two hours and seventeen minutes – and they are well-written (by Benj Pasek and Justin Paul, the song-writing duo behind The Greatest Showman and La La Land) and especially well-performed enough to invoke an emotional reaction as you sit and watch the reasonable justifications behind some of these questionable choices within the plot.

There is, however, some awkwardness in the execution of it all. Director Stephen Chbosky, who seems to really like coming-of-age dramas having also directed The Perks of Being a Wallflower and Wonder, is clearly not used to directing big showstopping musical numbers, because most of them amount to actors just standing around and moving about slowly as they belt out some pretty powerful ballads, which the blocking and overall staging makes oddly lifeless. The movie also has some problems with tone, as there will be a very dramatic number in which a main character contemplates suicide right after a much more comedic song about the fake relationship between Evan and Connor, which again makes it awkward having to switch from one mood to another in such a short space of time. Then there’s the handling of serious themes like mental illness and suicide, which although are not insultingly eschewed here are also not dealt with in perhaps the most rounded of fashions either. Dear Evan Hansen adopts a very “movie” approach to mental health, which shows it as something that can easily be fixed or nurtured through simple conversation and events that reaffirm someone’s self-worth through unrealistic means. Having gone through serious bouts with my own mental health, I can attest that there’s a lot more to it than what this movie perhaps offers, and while I do not consider Dear Evan Hansen to be among the worst examples of mental health portrayal in cinema – hell, it isn’t even the worst such film I’ve seen this year – it’s a little disappointing that the film doesn’t offer real-world solutions that could actually help people in the long-term.

So no, Dear Evan Hansen isn’t exactly the train-wreck that everyone is making it out to be. Heavily flawed though it may be, there are a number of strong qualities that shouldn’t entirely be overlooked, like the fact that it is well-acted by people who clearly know these characters inside out, and it’s clear that the movie does have a sense of heart, even when it doesn’t always seem it’s being used in the right way. It’s easy to see why this was such a hit on the stage, but in the movies, there’s a lot more to answer for, and sadly it’s not entirely up to the task.

Dear Evan Hansen is an awkward, but nowhere near as bad as it’s been made out to be, movie musical which despite its good intentions and some strong performances, including the somewhat miscast lead Ben Platt, suffers from an inconsistent tone and lightweight approach to heavy themes such as mental health.

Dear Evan Hansen is now showing in cinemas nationwide – click here to find a screening near you!