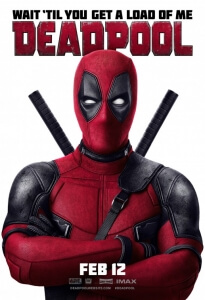 BASICALLY…: After being subjected to a sinister experiment to cure him of his cancer, Wade Wilson (Reynolds) – left with accelerated healing powers, disfigured skin and a warped mind – assumes the identity of Deadpool to track down those who ruined his life…

Can we just take a moment to appreciate how much this film pretty much owes its very existence to the fans, perhaps more so than any other comic-book property on the market right now?

Their heated reaction to the character’s infamously-botched appearance in X-Men Origins: Wolverine paved the way for talks of a solo Deadpool movie to ride into development, and when that looked like a dead end, despite the involvement of star-producer Ryan Reynolds (reprising his role from that movie), Zombieland writers Rhett Reese and Paul Wernick, and hired director Tim Miller (making his feature debut after a career in the effects department), the fans became savvy. An all-CG reel of test footage, with Reynolds providing motion-capture for the titular character, was leaked online to the overwhelming praise of Internet dwellers, practically forcing 20th Century Fox to not only release the footage officially, but also – most crucially – give the movie the greenlight after years of trying to get it off the ground (Incidentally, you can watch said footage right below).

And now, here we are: Deadpool is finally a reality, in all its vulgar, foul-mouthed, refreshingly un-PC glory, and there is nobody but the fans to thank for making such a treat happen in the first place.

Easily the most fun and entertaining superhero movie since Guardians of the Galaxy, the film absolutely revels in the character’s snarky, self-aware personality and never lets up from the opening credits onwards (which include such anecdotes as “Directed by An Overpaid Tool”, “Starring A British Villain and A CGI Character,” and “Written by The Real Heroes Here”). The good majority of this type of humour thankfully hits bullseye, and even when it doesn’t it still somehow manages to hold your attention thanks to the sheer on-screen charisma of Reynolds, who finally has both a superhero film and a leading role he can be synonymous with (don’t worry, there are plenty of digs at his role in the abysmal Green Lantern and the Wolverine movie). To say he carries the movie is quite the understatement, as this is just as much his film as it is the fans who made it possible; whether he’s cracking a wise or even displaying some of the movie’s surprising amount of heart – his relationship with prostitute-cum-girlfriend Vanessa (Homeland’s Morena Baccarin) is unexpectedly sweet, with the two having strong chemistry with each other – Reynolds commands the screen in ways he was probably never allowed to before, and we’re all the more thankful because of it.

People are undoubtedly going to have issues with the story, or rather how paper-thin it really is when you break it down – mercenary Wade Wilson (Reynolds) undergoes an experiment to cure his cancer, which ends up rotting his skin and giving him advanced healing powers, and now he wants revenge, and that’s it. Sure, compared to other superhero movies like Guardians or even the X-Men franchise (the latter, by the way, is very much established as part of this particular world by the inclusion of mutant characters Colossus (aforementioned CGI character voiced by Stefan Kapičić) and Negasonic Teenage Warhead (Brianna Hildebrand), or “Ripley from Alien3“ as Deadpool calls her), it’s not on a grand epic scale where the world’s fate is in balance or anything like that, but we honestly found that rather refreshing. The fact that this is a much lower-key film of this type than the others means that it has the ability to stand out more as not so much a revolutionary new step but rather a suitable alternative to all the destruction and slightly more family-friendly elements of the MCU and beyond; hell, the biggest set-piece in the movie is on a construction site with a giant freighter that’s not even close to the city, whereas if it were closer to the formula it would be way more heroic and considerate. But, as Deadpool himself says, “I may be super, but I’m no hero”.

The action, too, is a lot of fun, and any fears of first-time director Miller showing his naivety behind the camera can be put to rest as these sequences are incredibly enjoyable to watch, from the excessive CGI gore (which, in a film like this, shouldn’t necessarily be considered a drawback) to the fact that you can pretty much tell exactly what’s going on all the time, which makes it have far more balls than most comic-book movies out right now in terms of action and the violence it encourages. Not since the Blade series has a property like this revelled so much in its adult nature, which should be more than enough to put that petition to release it as a PG-13/12A to shame.

If there were one or two weak spots, it would be that – as seems to be the case with a lot of superhero movies nowadays – the villain isn’t as strong as the hero. Ed Skrein plays Ajax, a name he prefers to go by instead of Francis, and while the character is written mostly as a stock bad guy Skrein simply isn’t as intimidating as he should be (though he makes for a better bad guy than he does a good guy, as we all know from The Transporter Refuelled). Also, as much as the momentum easily carries this movie right from the get-go, it starts running ever-so-slightly on fumes by the third act; not to a point where the film is ruined, but it becomes clear that the sugar rush it seems to be on is starting to die down a little bit.

But hey, when Deadpool was on said rush, it was an absolute blast – and it’s thanks to the fans that made it all possible.

Deadpool is a heavily entertaining and fun adult detour from the standard superhero fare, with Ryan Reynolds and co finally bringing the character to the big-screen in a film that should satisfy fans of the character as well as those of kinetic violence and meta humour, both of which this film delivers in spades. It’s bloody good fun.