Days of the Bagnold Summer (Review)

Days of the Bagnold Summer (Review) 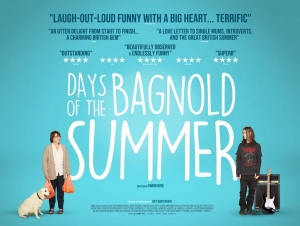 BASICALLY…: A moody teenager (Cave) is forced to spend the summer with his mother (Dolan)…

Let’s be honest, the majority of us aren’t doing a whole lot during this lockdown; sure, there are some who are going out for walks, cycle rides and socially-distanced meetups, but the rest of us are wasting our days sitting around the house, bored out of our minds as we scroll endlessly through Netflix or play endlessly on our games consoles. I’m guilty of being one of those people, and if you are too then there’s no shame in it.

A movie like Days of the Bagnold Summer feels like a good fit for these inactive times, not just because it’s about the very nature of doing next to nothing over an extended period of time (sound familiar?), but also because it’s decent enough to keep you occupied for a short while until you inevitably grow tired of your home routines once more.

The directorial debut of The Inbetweeners and Friday Night Dinner star Simon Bird, based on Joff Winterhart’s graphic novel of the same name, is about a middle-aged librarian named Sue (Monica Dolan) and her moody, long-haired teenage son Daniel (Earl Cave); an odd couple if ever there was one, they bicker and clash as mothers and adolescent boys tend to do. However, the hostility is just warming up; when Daniel’s trip to see his father and his expectant new wife out in Florida is suddenly called off, leaving him stranded for the next six weeks with his doting mother, Daniel’s behaviour becomes much more unpleasant, despite Sue’s attempts to bond with her son and keep things relatively calm, and the two become even more at odds with each other as the summer days go by – but also, oddly, they grow closer than ever before.

At first, you’re worried that the movie is just going to be 80-something minutes of nothing but constant misery and hostility between these two characters, and you’d have every reason to be concerned. A lot of the time, Daniel comes across as an extremely rude and bratty adolescent, always moaning and whining about everything under the sun, even when his mother is clearly trying to make things work for her and her son in this situation. However, Bird doesn’t let it completely turn into an endless pit of unpleasantness, instead opting for a more sensitive and low-key route that humanises these two characters and makes their frustrations a little easier to identify with. Sue, for instance, is a quiet and lonely woman riddled with anxiety and a general lack of self-confidence, but she has a genuinely sweet soul that is clearly putting in effort with her troubling relationship with her son, and Dolan brilliantly conveys the loving but easily wound-up nature of her character with remarkable ease. On the flipside, you have Daniel who, again, does and says some very hurtful things which could easily make him an irredeemable character, but Cave is able to find the humanity in his otherwise unattractive persona, exhibiting personal fears of opening himself up to others in the aftermath of being effectively abandoned by his father, which do actually make you understand where he’s coming from when he does say something awful.

Their performances are guided rather well by Bird who, remarkably for someone with only one other directing credit to his name (for a short he made in 2016), shows great restraint and artistic merit in his simple but eye-opening style. The numerous back-and-forths between mother and son have a bouncy rhythm to them, partly because of the strong odd-couple chemistry between Dolan and Cave and also due to Lisa Owens’ gentle script, with Bird holding those two elements together with natural timing and deliveries which makes every single character feel like they could truly exist in the real world, right down to Rob Brydon’s slimy romantic interest for Dolan. Set to a soothing Belle and Sebastian soundtrack, the filmmaking has a ring of truth to its execution, because it feels like it was made by people who really understand the personal problems that both Sue and Daniel are going through, and have done their utmost to replicate those feelings into a story that reflects them in a melancholic but also meaningful manner. Bird shows great promise as a director in a film that’s full of warmth and unexpected humanity; not bad for a guy whose most famous role once had him soil himself in the middle of a school exam.

It might, however, leave some people looking for more in terms of actual events out to dry. There isn’t much that happens throughout most of this movie, or at least nothing that feels too dramatic; the biggest things to occur are probably a trip to the seaside, and a falling out with a close friend. It doesn’t bother me so much, because the lack of a more dramatic series of events preserves its more realistic tone and also keeps it from becoming too episodic, but it might not win over anyone who prefers a bit more excitement in their viewing experience.

Honestly, though, I doubt there’ll be many people bothered by that exactly. These are such restrained times that any new release seems like an event nowadays, even when they’re as low-key as this, and I’d like to think there’s enough people out there who are curious enough to give this one a watch. Those folks will be rewarded with a sweet and watchable comedy-drama that introduces an intriguing new filmmaking talent in Simon Bird.

Days of the Bagnold Summer is a sweet and gentle comedy-drama for these inactive times, with debuting director Simon Bird bringing a simple and satisfying style to the light story of a bickering mother and son, played wonderfully by Monica Dolan and Earl Cave who bring a sense of humanity to a couple of characters who could have so easily been completely unbearable in the wrong hands.