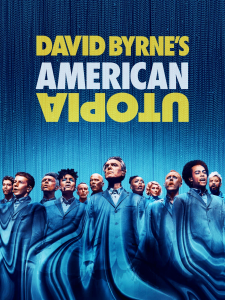 BASICALLY…: A live recording of David Byrne’s acclaimed 2019 Broadway play, based on his recent album and tour…

You know you’re in for an unusual experience when one of the first things you see in David Byrne’s American Utopia is the former Talking Heads frontman singing about different areas of the model brain he’s holding in his hands. I suppose, for many who are more familiar with his work than I admittedly am, this is roughly on par with the singer’s oddball eccentricity, though as a certified Byrne newbie I did find it strangely amusing.

It’s a feeling that kept going all throughout his newest concert movie, a recorded version of his acclaimed Broadway production based on his recent album American Utopia and the subsequent tour he and his band embarked on. The show is essentially a live performance of Byrne’s songs, both old and new, accompanied by a live band who also sing and dance (barefoot, as well) while playing their various instruments from bass guitar to blow piano. That’s really all the film is; no plot, no characters, just Byrne and his fellow musicians jamming away while every now and then Byrne delivers a ponderous monologue to the audience. In other words, it’s a straightforward concert movie, with a hint of abstract theatre.

There is, however, something euphoric about the music and the way it’s performed that gives the production a real sense of life, in lieu of traditional props or indeed any theatrical apparatus (Byrne himself mentions that he intentionally stripped the stage of anything unnecessary, leaving only the people that are most important). Perhaps it boils down to the direction by Spike Lee, who captures the on-stage oddities with visual grace – close-up shots of the performers’ bare feet, a lamp that illuminates one particular song, and even using GoPro footage when Byrne and company waltz into the audience during the encore – that allows the music to shine through along to some of these bizarre collections of imagery. Lee simply lets David Byrne be David Byrne, performing his strange little numbers (among them a Dadaist song made up of complete gibberish) with a remarkable sense of ease and comfort, while complimenting them with carefully angled shots that add to the surreal nature of both the songs and the performers.

Byrne fans will probably know that this is hardly the first time that he has teamed up with a major Hollywood filmmaker to bring one of his concerts to the screen; in 1984, Byrne and the late director Jonathan Demme (of Silence of the Lambs and Philadelphia) collaborated on Stop Making Sense, a film considered to be the benchmark for most concert movies with – once again – strange imagery set to even stranger music. With American Utopia, Byrne and Lee offer a more stripped-down experience, relying heavily on the songs and the minimalist stage lights to create a fascinating atmosphere (as opposed to the oversized suit and noodle arms of Demme’s film), rife with not just thoughtful observations about the human condition and our connection to one another, but also deeply political statements which are timely but also hopeful. It’s in the latter collection where you really start to feel Lee’s directorial style creeping in, especially during a cover of Janelle Monáe’s protest song “Hell You Talmbout” where large blow-ups of fallen black civilians from Trayvon Martin to Sandra Bland are presented with captions of their birth and death dates. Through the combination of Byrne and his chorus’s electrifying vocal performance and Lee’s on-point direction, these are the moments that hit hardest, because while the rest of the movie is fun and fluffy (in a good sense), this feels like one of the few times when it actually feels as though it has a purpose.

Of course, a film cannot be solely defined by its strong political stance, which makes it fortunate that David Byrne’s American Utopia is otherwise a rather exhilarating viewing experience on its own. You’ll be admiring the music and Byrne’s natural charisma – especially if you’re a fan of his to begin with – while also appreciating the ways that Lee has captured the show’s vibrant and strangely uplifting spirit, with inflictions of his own brand of style as well. It’s certainly a must for any hardcore fans of David Byrne or his former band Talking Heads, and though I can see some of the more casual viewers being a little put off at first by its strange vibes, it’s ultimately a soothing watch set to some delightfully odd music.

David Byrne’s American Utopia is a recording of the singer’s acclaimed Broadway production as captured by director Spike Lee, who combines the delightfully oddball nature of Byrne’s music and his own filmmaking style to create a concert experience that’s full of energy and strangely uplifting political sentiments.