David Attenborough: A Life on Our Planet (Review)

David Attenborough: A Life on Our Planet (Review) 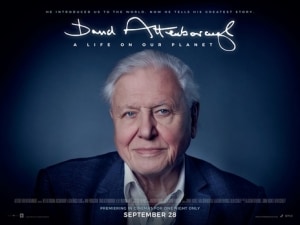 It’s no secret that our planet is slowly but surely headed for climate-based disaster. Decades of burning fossil fuels, destroying rainforests and wiping out entire species of animals has led to severe environmental changes from the melting of the polar ice caps to significantly warmer weather which has, in extreme cases, caused widespread fires in rural areas. If decisive action isn’t taken sooner rather than later, things will be devastating for generations to come.

But why would you listen to me about any of this? I’m not a scientist, or even an expert in these areas; I’m just a lowly film critic who likes to write about my thoughts on movies online. If you’re going to listen to anyone about the rapid progress of climate change, it’s most certainly not going to be me – but maybe you’ll instead listen to someone who’s had a lifetime of experience exploring our world and its many wonders, and has witnessed first-hand the devastating effect of climate change throughout the course of several decades.

Enter Sir David Attenborough, the 94-year-old legend himself who fronts a vital new documentary about this very topic, carrying with him a sobering yet ultimately optimistic message about the steps we need to take in order to put things right, as well as stark warnings about what might happen if no action is taken.

In A Life on Our Planet, Attenborough uses his long career in journalism as a reference point for how the environment has changed significantly since his early days in the field as well as his own childhood; compared to the early-to-late 1950s, the global population is at least twice the size now as it was back then, and therefore the appetite for big business to exploit the land for sustainable energy has grown substantially. Attenborough points out, however, that humanity’s habits of unleashing uncontrollable amounts of carbon dioxide into the atmosphere has greatly upset the biodiversity, leading to several extinctions of animals, destructions of habitats, a warmer climate, and even the once-colourful seabeds of coral have had all of their brightness stripped away, leaving nothing but white skeletons to be blanketed in seaweed. It is a world, Attenborough summarises, that is barely recognisable from the one he has spent most of his life exploring, and if things continue to go as they currently are, then he reckons that a century from now most of our planet will be virtually uninhabitable.

Attenborough’s “witness statement”, as he prefers to call it, is certainly a cause for concern, and with a healthy combination of stunning wildlife footage – all set to his soothing narration, of course – and a knowledgeable amount of information that only someone with his lifetime of experience could have accumulated, he is able to guide the audience through a bleak and even grotesque depiction of humanity’s abuse towards the planet, from the gory slaying of whales to giant trees falling victim to electric chainsaws. The message is laid out perfectly clear for all of us to understand, whether you are an avid campaigner for a greener, healthier planet or a climate-change denier who is being enabled by world leaders who still view the phenomenon as a hoax, and Attenborough’s firm conviction helps to drive that message deep into the pits of our skulls. This isn’t the kind of movie that hides its unsubtlety; all of this stuff is happening right now as you read this, and the film serves as a wake-up call to anyone who still has not realised the severity of the situation, politics be damned.

Although the starkness of what we are seeing and hearing about our potential future is alarming to say the least, the movie is not simply a feature-length guilt trip. There is great optimism in Attenborough’s vision, particularly as he lays out steps that we collectively need to take in order to secure the survival of our wildlife; you don’t have to agree with every single point he makes, but as long as you are aware of what ultimately needs to be done to avoid catastrophic environmental damage, then the goal of the film can be easily achieved. Attenborough also observes how, eventually, nature will win the war; to prove his point, he visits the abandoned Ukrainian city of Pripyat where, a few decades after the Chernobyl disaster, expansive wildlife has reclaimed the land, with vines coating the empty apartment buildings, trees sprouting as far as the eye can see, and even some of nature’s rarest animals roaming about freely. His notion is that, while the environmental situation is unmistakably severe, there will ultimately be a happy ending for life on Earth; however, it is imperative that by acting now to reduce the current reliance on greenhouse gases, and a number of other contributions to our current scenario, we can work towards that happy ending sooner rather than later.

Attenborough is someone who, over his incredible career, has seen far more of the planet than we ourselves will likely see in our own lifetimes, so when he talks about the damage that is being done to it and what we can do to prevent things from getting worse, you ought to listen. This film does a fine job of driving his message home, and will hopefully be seen by as many people as possible to get us all moving towards the more positive conclusion, rather than continue heading down the negative path we are currently finding ourselves on.

David Attenborough: A Life on Our Planet is an urgent and powerful documentary that sees the legendary broadcaster lay out his knowledgeable experience of our rapidly deteriorating wildlife, in a stark but sobering message that ultimately ends with optimism about what we can do to preserve the environment for generations to come, and how eventually – to quote the words of Dr. Ian Malcom – life, uh, finds a way.