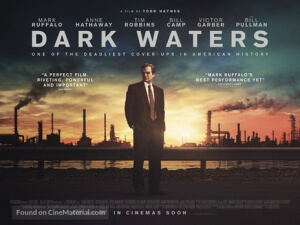 Aside from being one of Hollywood’s most reliable actors, Mark Ruffalo is also a major political activist, having used his social media platforms to promote such things as gay rights, political candidates, and awareness of climate change. When you take this into account, it’s easy to see why he’d be attracted to a project like Dark Waters; after all, it’s about a very serious issue that affects each and every one of us, and specifically about someone who has spent a lot of years trying to do what is right for the countless amount of people affected by it.

Ruffalo’s participation certainly helps to at least gain attention to its overall message, and while the movie isn’t without its slight bumps it is a story that is briskly told and superbly portrayed to make you really care about what it’s setting out to say.

The film, directed by Todd Haynes in a radical departure from elegant period pieces like Carol and Far From Heaven, is spread out over a number of years, starting in 1998 when Cincinnati corporate lawyer Robert Bilott (Ruffalo) is first approached by West Virginia farmer Wilbur Tennant (Bill Camp). He wants Bilott to link the unexplained deaths of his livestock to what he suspects are chemicals being dumped into the water supply by DuPont, the world’s largest chemical company, but when Bilott digs deeper into the investigation he discovers that DuPont is responsible for a lot more than just contaminating a local water supply; as it turns out, the same chemicals are also found in objects around the home such as non-stick pans, meaning there is an extremely high chance that every single person in the country – or, indeed, the world – may have been contaminated with the chemicals, which can cause cancer over time. The discovery kicks off a lengthy legal battle waged by Bilott and his firm against DuPont, which threatens to push Bilott over the edge and complicate his relationship with his wife Sarah (Anne Hathaway) and their children.

It’s easy to compare the film in some ways to Spotlight (another Mark Ruffalo movie about a real-life investigation into a very serious subject matter), but this is a film that takes more of its sweet time uncovering the truth and laying out the facts in front of you, so there are times when the 126 minute running time feels about that long even when you are being sucked in to the drama and the investigation. However, it doesn’t feel like a coincidence that the film feels somewhat slow; one of the things that’s interesting about the film is how it depicts the sheer length of time it took for this whole case to even get off the ground, starting around the late 90s and going as far forward as 2015, and you feel the frustration of Ruffalo’s character as well as the numerous supporting players as things are pushed back further and further, to a point where it takes years for mere test results to come through. Perhaps it was Haynes’ intention to make us feel like we’re sitting there for a good long while, watching people be constantly stonewalled left and right while only moving forward mere inches, and in that sense it works but it can leave one restless every time it seems to near a conclusion but then keeps on going. In that sense, it’s not quite up to the same level as Spotlight, which was consistently thrilling from start to finish, but it does have some truly strong moments that make it a palatable message movie.

That message is expertly conveyed by Ruffalo, who is great in the movie as Bilott, and by also taking on a producer’s credit he has more or less been given the steering wheel to drive the project towards its point with great care and ease (no offense to Haynes, who provides some tight and often stylish direction, but it’s clear that this is Ruffalo’s baby all the way). You can feel that he is passionate about getting this story out to the world, in a performance that cautiously lets us in on all of the complicated jargon and terms without once talking down to the audience, and through a focused script that dramatizes this long and trying legal battle without taking too many liberties, which would have otherwise distracted from its central reason for existing. Ruffalo is supported by an ensemble of familiar faces, including Anne Hathaway whose role as Bilott’s wife would have been thankless if it weren’t for the actress’s many (in fact, a little too many) monologues she delivers affectionately, and character actors like Tim Robbins, Victor Garber, Bill Pullman and an amusingly over-the-top Bill Camp who all clearly have the same level of dedication and passion for the material as Ruffalo does, and show not just the frustrations but the emotional toil it has on each one of their characters.

Though it certainly has an important message to spread, and by most accounts it does a solid job at spreading said message, it’s a film that perhaps could have used maybe a slight tightening around the edges; the pace does drag on occasion, with some scenes maybe going on for slightly longer than they should. Despite that, Ruffalo carries the movie to a healthy conclusion, not only getting his message out there to the public but also turning in a well-crafted and well-executed movie that entertains regardless of what it wants to say.

Dark Waters doesn’t quite reach Spotlight levels of engrossing investigative drama, but it does have a powerful message to spread that is done so by the efforts of star/producer Mark Ruffalo, who champions the project with a great lead performance and solid filmmaking to ensure that the intentions are not only made out to be as important as they are, but executed in a solid manner that will appeal to most audiences.

Want to decide what the movie’s like for yourself?
Check out Dark Waters showtimes in London
via