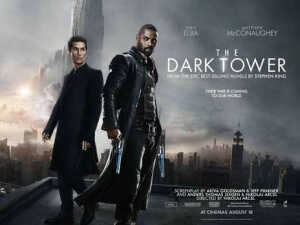 BASICALLY…: A young boy (Taylor) enters another dimension where he meets The Gunslinger (Elba), who is on a mission to protect all realities from succumbing to the wrath of an evil sorcerer (McConaughey)…

There have been so many Stephen King adaptations over the years, and there’ll be plenty more in the future, but oddly enough it’s not until now that The Dark Tower – which is widely considered to be the most important book series in King’s bibliography – has been made into a film. It’s not like they haven’t tried, either; for years, several directors like J.J. Abrams and Ron Howard have been trying to get it off the ground, and at one point it was even mooted for an ambitious film and television adaptation combo (a plan that is apparently still on, with former The Walking Dead showrunner Glen Mazzara attached to oversee the future TV show).

Sadly, all those efforts and ambitions seemed to go down the drain once Sony got involved. Yes, the biggest shit-show of a Hollywood studio is back to screw things up yet again, and their handling of The Dark Tower’s long-awaited debut on the big screen has all been par for the course for their increasingly terrible decisions. The production was plagued with problems since they fast-tracked the movie back in 2015, with poor test screening results leading them to contemplate firing director Nikolaj Arcel at one point, a whole bunch of costly reshoots, and a trimmed-down running time of just over an hour and a half, about thirty minutes less than the average blockbuster nowadays.

So it should be no surprise to hear that The Dark Tower is kind of a mess, but it might be a bit more surprising to know that, while it definitely isn’t very good, it’s not entirely awful either.

The plot of the film is loosely based on several elements of King’s books, with eleven-year-old Jake Chambers (Tom Taylor) having some troubled visions of a man in black trying to destroy a large tower, which leads to him discovering a portal that takes him to the parallel universe of Mid-World. There, he runs into Roland Deschain (Idris Elba), a former “Gunslinger” who is on a quest to stop the Man in Black – a powerful sorcerer named Walter Padick (Matthew McConaughey) – from destroying said tower, which is the one thing that keeps monsters from outside the many universes to invade and destroy everything. So, Jake accompanies Roland on his quest and discovers a little more about the many worlds around him, as well as some of the monsters.

As someone who has not read any of the Dark Tower books, I cannot imagine what it must be like for someone who has actually read them to then see this movie which, from what I hear, is seriously watered-down and simplistic in comparison. This has to be a similar situation, if not the exact same, to when The Last Airbender debuted to the ire of many fans of the Avatar cartoon series, but whereas that film was a complete and utter failure of a movie whether or not you were familiar with the original source material, The Dark Tower at the very least offers a few interesting ideas, even if it doesn’t fully explore any of them. The post-apocalyptic land of Mid-World is one that leaves you wanting to know a lot more about, as there are societies and even characters that have the potential to be very interesting if the film ever allows them to, which it unfortunately doesn’t. There are even a whole slew of references to other Stephen King stories that were fascinating, especially when one knows that apparently this is the story and universe meant to tie a lot of King’s other stories together. For instance, the psychic ability popularly known as “The Shining” is referred to by name here, and is even used at several points in the film; a character plays with a model car that looks an awful lot like Christine; a giant St. Bernard (presumably named Cujo) is seen being walked in the street; and the number 1408, a staple in many of Stephen King stories, including a short story and eventual film with that as its title, pops up above a portal. The fact that this film clearly wants to tie all these established stories and ideas into this film, just as it was in the books, show that there was clearly some thought being put into how this universe would be represented on the big screen, and it was interesting to see it all tie together.

But that still doesn’t excuse it from being a definitive mess, with characters that are just introduced to us without any build-up or even a hint of who they are, making this feel a lot like we’re watching the second part of an ongoing series where for some reason the first part somehow never got made. While it is a mercifully short movie at 95 minutes, you still sense that a LOT of material was either cut out or reshuffled to make for a slightly more jumbled timeline (which, if reports are to be believed, was exactly what happened). It’s mostly just a botched franchise-starter that clearly has studio fingerprints all over it, and while it does have its own minor strengths – including its two main headliners, with Elba trying his hardest with the thin material, and McConaughey being a lot of fun as he hams it up as the villain – it’s still a rather sad sight even for those who never read the Dark Tower books, because all those years of trying to get it off the ground, with so many talented filmmakers and producers coming up with such ambitious ideas for the adaptation, seem to have entirely gone to waste with this basic, generic, conveyor-belt studio movie. Once again, Sony has screwed up royal, but now they have an entire slew of angry Stephen King fans to deal with.

The Dark Tower is a definitive mess that has Sony’s grubby fingerprints planted all over it, from a watered-down and simplified version of events in Stephen King’s book series to a short running time that never allows for expansion on more interesting parts of this story, but at the very least it displays some semblance of ideas even if they are never fully utilised, and hints at much larger connections to King’s previous stories that haven’t been largely hinted at before.