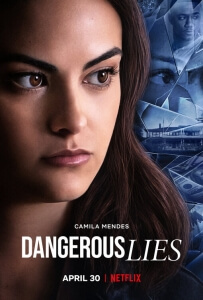 BASICALLY…: When a caregiver (Mendes) is unexpectedly left a dead man’s estate, she is drawn into a web of conspiracy and murder…

One of the many surprises in last year’s Knives Out was the heavy focus on Ana de Armas’ caregiver character, who – mild spoilers for that film – turned out to be central to the main murder mystery, especially when it became apparent that she had inherited everything over the victim’s family. Though certainly an unbelievable turn of events, the movie was backed up by some great writing, strong acting and smart direction that made the twist feel natural and nowhere near as corny as it could have been.

Now, imagine if there were none of those strengths. Imagine, instead, if it was all shot, written and performed like a TV movie you’d find on the Lifetime network. It suddenly seems a lot more far-fetched and ridiculous, doesn’t it? That’s what Dangerous Lies is there for, to show how much dumber this plot thread could have been if there wasn’t someone like Rian Johnson there to inject some real intelligence into it, and to be a far less ambitious and overall less satisfying thriller that not even cinemas would be wise enough to pick up.

Like in Knives Out, the main character is a young caregiver named Katie (Camila Mendes), who has become close with her elderly patient Leonard (Elliott Gould) – so much so, in fact, that when Leonard dies all of a sudden, he ends up leaving everything to her in his will. It comes as both a shock and a delight to both Katie and her husband Adam (Jessie T. Usher), who were previously struggling with their finances, but soon it transpires that there’s more to the windfall than meets the eye, and both Katie and Adam end up being caught in the middle of a greater conspiracy concerning certain materials within the house.

Putting this movie on Netflix feels wholly right for this film, because it is shot, directed, acted, edited, scored etc as though it really was originally meant to be broadcast on television, specifically on a channel like Lifetime which constantly produces movies with this exact tone and pace numerous times throughout the year. Everything about this movie just screams “small screen”, from the writing which contains dialogue and plot twists so contrived and hackneyed you almost expect them to be followed by a hard cut to the credits of this particular episode, to filmmaking that never tries to stretch itself beyond simple static shots and bland lighting which neither adds to the atmosphere nor makes it feel grander than it actually is. You can also tell that this script was also probably rushed through the corporate factory from whence it came, because it sets up a number of things that barely come back into play later on (a prologue sees Adam foiling a diner robbery, which often seems like it’s going to come back in a major way later on, but it never really does) and seems to just end, as though they ran out of money to shoot a proper, more satisfying climax. It’s definitely a television movie you’d find on something like Lifetime, or even Hallmark for that matter (it’s a 12, but everything is so tame it could honestly get by with a PG), yet it’s there on Netflix as an original film instead of the airwaves where it really belongs.

The only reason I can think of as to why it ended up on Netflix and not on one of those other channels is because of star Camila Mendes and her popularity thanks to her turn in Riverdale; although, no matter what format this movie would have ended up on, it wouldn’t change much of the fact that she and fellow lead Jessie T. Usher aren’t very good in this. Their chemistry is lacking, causing them to act less like a married couple (so much so that I forgot they were supposed to be married until the dialogue reminded me) and more like a couple of acquaintances who can just about tolerate each other, enough to at least share the same room with one another. They’re both also very wooden in general here, with Mendes barely changing her tone of voice even in scenes that call for her character to feel any kind of emotion, and Usher lacks any sense of charisma in a role that relies heavily on it for the audience to forgive him for a lot of dumb things he does throughout the movie, of which there are plenty. Both actors can’t save this movie under the poor direction from Michael Scott (which right there is further proof that this was probably meant to be a television exclusive), because neither are given a whole lot to work with, and because of that they turn in some underwhelming turns which fail to make the film seem a lot more fun than it is.

It’s a throwaway thriller where not much of it makes sense, with the kind of bland filmmaking and even blander performances that only exemplifies how much none of it adds up, and with writing where several major twists are heavily telegraphed from miles away. There have been many movies like this before and there’ll be plenty more after, but there’s an art to making some of these movies so enjoyably ridiculous which this movie doesn’t seem to be too interested in working towards, and instead becomes a film you won’t feel too angry with but you certainly won’t remember long after seeing it.

Instead, you might as well change the channel to something that does this kind of plot right, like Knives Out – at least that movie kept things interesting all the way through.

Dangerous Lies is a throwaway thriller with numerous made-for-TV qualities, from the bland filmmaking to some rather wooden performances, none of which are even made that entertainingly ridiculous with a trite script that makes all too little sense (especially after you’ve seen it done so much better in a film like Knives Out).