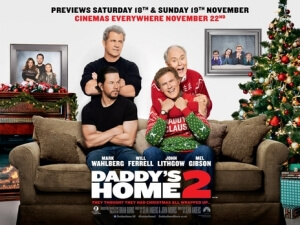 BASICALLY…: Brad (Ferrell) and Dusty (Wahlberg) must deal with their own intrusive fathers (Lithgow and Gibson) who have come to celebrate the holidays with their family…

I heard a film critic recently remark whilst reviewing this movie that Will Ferrell is the new Adam Sandler, which I don’t think is necessarily true. Sure, the past few films that he’s made with his production company Gary Sanchez Productions haven’t exactly hit bullseye, but compared to the majority of Happy Madison’s filmography they might as well be the same quality as Monty Python.

However, Ferrell – like Sandler – seems to have settled a little too comfortably into a shtick of man-child naivety and heavy (and often forced) slapstick which seem to undermine his own abilities as a talented comedic performer, and nowhere are these skills more underutilised than in the Daddy’s Home movies, which put both him and Mark Wahlberg – two actors who have in the past proven to have strong on-screen chemistry – alongside material that you can definitely tell is trying to make you laugh, which is more than one can say for most of Sandler’s films, but doesn’t work as well as it wants itself to.

Picking up around the festive period, Brad (Ferrell) and Dusty (Wahlberg) have amended their past feuds and begun to work together as a collective family unit, to support Dusty’s biological kids to whom Brad is step-father to. As they begin to plan to spend Christmas together, they receive news that their own fathers are coming to town; Dusty’s hard-knuckled and devilish dad Kurt (Mel Gibson), and Brad’s affectionate and happy-go-lucky father Don (John Lithgow), both of whom seem to rub our main dads the wrong way. Hijinks, naturally, ensue when Kurt decides to bring them all to a large cabin for the holidays, where all the dads are about to butt heads in the ultimate (read: lame) showdown.

If you don’t remember my thoughts on it, I wasn’t too much into the first Daddy’s Home; while I thought Ferrell and Wahlberg had their moments together, the script just wasn’t very funny and relied far too heavily on pratfalls and silly childish humour. Daddy’s Home 2 is pretty much the same, only this one has a couple of advantages that make it a little easier to watch than the first, and their names are Mel Gibson and John Lithgow. Aside from the fact that it’s some pretty ingenious casting, both Gibson and Lithgow are easily the best parts of the movie, since they get some of the biggest laughs from their deliveries or even just their expressions, and they have some of the more amusing arcs in the movie, which makes you want to watch a movie about them far more than the one you’re stuck watching with Ferrell and Wahlberg. Lithgow’s always entertaining to watch, so it’s no surprise he’s a scene-stealer here; and as for Gibson, he seems to know what kind of movie he’s in and is just having a blast ridiculing everything about this movie, which kind of makes it a good bit of fun to watch. Incidentally, all of those people who are up in arms about Gibson being in movies again after his very public fall from grace, and taking into account the far worse things that a few other power players in the industry have been accused of lately, sure Gibson may be a terrible person, but at least he (to the extent of my knowledge) hasn’t done half the things that Harvey Weinstein has done, so count yourselves lucky we’ve got a slightly less awful human being working again.

But outside of both these veteran actors, there’s really not a whole lot to recommend about this film. If you’ve seen the first Daddy’s Home, then you’re pretty much going to get what you expect, with the not-very-funny slapstick and attempts at comedy with Ferrell and Wahlberg being no better or worse than they were last time, and the kids who are the whole reason this central conflict is existing barely register as characters (so do the actual mothers, like Linda Cardellini whose role gets a bit of a downgrade from her basic role that’s mostly defined by the word “wife”). It just settles into a formulaic set-up for pratfall after pratfall, with Will Ferrell being hit in the face or inadvertently destroying some property every five minutes, and hardly any of it registers as being laugh-out-loud funny, or at the very least well below the fine line that Ferrell has previously established for himself.

Again, like the previous Daddy’s Home, this isn’t quite bad enough to make the worst-of-the-year list, but it’s still not worth recommending unless you liked the first one. Hopefully Ferrell doesn’t become too much like Adam Sandler, but movies like this certainly don’t help.

Daddy’s Home 2 doesn’t improve much on the first film and proves to be just as lame and unmemorable as that film, although this one just about gets by thanks to the worthy addition of Mel Gibson and John Lithgow to the cast, who are both easily the highlights of an otherwise mediocre film.