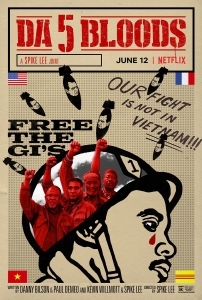 BASICALLY…: Four African-American veterans of the Vietnam war return to the country to locate the remains of their squad leader, and the buried treasure they left behind…

Last week, Netflix released The Last Days of American Crime, which – with its dull action, one-note performances, paper-thin characters and an unpleasant sense of sympathy towards the brutal law enforcement – could not have come at a worse time in this moment in history. Don’t worry, though, because they’ve made up for that little mistake by debuting a film that feels a thousand times more timely and respectful during these times of protests and calls for civil justice, and also happens to easily be one of the best films released so far this year.

Da 5 Bloods is Spike Lee’s latest joint, and it is (literally) continents away from his last feature, the equally powerful BlacKkKlansman; set in present-day Vietnam, four African-American war veterans – Paul (Delroy Lindo), Otis (Clarke Peters), Melvin (Isiah Whitlock Jr.) and Eddie (Norm Lewis) – reunite for a very tender mission. Years ago, during the Vietnam war, the four soldiers and their squadron leader “Stormin’” Norman (Chadwick Boseman) came across a crate of gold bars worth millions, and promised to one day return and distribute the gold amongst their fellow black civilians; now, they are not only attempting to find the gold, but to also reclaim Norman’s buried remains – so long as they can survive the Vietnamese wilderness, ruthless mercenaries, hidden landmines, and each other (that includes Paul’s son David (Jonathan Majors) who unexpectedly shows up for the adventure as well).

For lack of a better comparison, this is Spike Lee’s answer to both Apocalypse Now and The Deer Hunter; a true war epic in every way shape and form, but also a meditative exploration of the haunting consequences of PTSD from this particular war, Da 5 Bloods is a film that stands tall and proud on its own two feet with majestic chords that could only be struck by a masterful storyteller like Lee. The plot is straightforward and always engaging, leaving you completely on the edge of your seat with some unpredictable game-changers which leave you totally uncertain what’s going to happen, and to who – this is a film where anybody, whether they’re a major character or a mere side figure, can just suddenly blow up from stepping on a landmine – while always keeping a strong pace that makes even its two-and-a-half hour running time feel like a breeze. It’s all told via some absolutely gorgeous filmmaking, with special mentions going to cinematographer Newton Thomas Sigel for capturing both the vast Vietnamese countryside and the grainy 1970s stock footage-esque flashback sequences with some truly eye-opening aspect ratios and digital camerawork, and composer Terence Blanchard for coming up with a fantastic musical score that rings back to the pure epic action-adventures of the period.

As for Da 5 Bloods themselves, they are a delightfully compelling bunch. The actors share great chemistry with each other, and the movie spends a fair amount of time between them to flesh them out more as characters with their own agendas and secret pasts; Clarke Peters’ Otis, for example, receives a very shocking surprise when he revisits an old flame from the war, while Norm Lewis’ Eddie passes himself off as the group’s wealthy benefactor until we learn more about what he’s gone through. They’re all well-defined and three-dimensional characters, each one of them as likeable and charismatic as the next, but the film also recognises that deep down, these are some truly flawed men. That can especially be said for Delroy Lindo’s Paul, who is hands down the MVP of the entire movie; this is a guy who has some severe psychological issues, the majority of it stemming from an unhealthy mixture of PTSD and his obsession with their fallen squad leader, which has led to a lifetime of resentment towards his adult son (played masterfully by Jonathan Majors) as well as some questionable personal decisions – he proudly admits to being a Trump supporter, even wearing the red MAGA hat on their epic quest – that make him an extremely complex but oddly sympathetic person. It should go without saying that Lindo is absolutely incredible here, commanding every single scene he’s in with an unhinged manner and crazed eyes that stare directly into your soul. He has a couple of amazing straight-to-camera monologues towards the climax of the film which you can bet good money will be the ones they use for his awards reel next season (if there even is one this year), because I guarantee that Delroy Lindo’s performance will very much be remembered over the next few months; he really is that good here.

Spike Lee has always been an exceptionally talented filmmaker, and here he strikes a lot of majestic chords that will leave fans of war movies very satisfied but also fans of his filmography and just fans of epic movie storytelling in general. He knows exactly how and where a scene hits hardest, whether it’s an emotional monologue by one of the actors or archival footage of historical black figures who were killed over the years on the very soil that these soldiers were sent in to protect (practises which, as we all well know, are tragically still occurring today). This is a powerful, beautiful film that deserves to be seen by the masses, especially those out there right now fighting and clamouring for justice to be brought to a deeply prejudiced society, which if films like this can be any indication can make the message feel all the more poignant and important.

Da 5 Bloods is a truly epic adventure movie that sees filmmaker Spike Lee pay loving homage to war dramas like Apocalypse Now and The Deer Hunter, while standing on its own as a fantastically realised film with a strong story, complex characters and brilliant performances, all in a movie that feels all the more timely and relevant considering what’s going on right now in our society. It’s not just one of the year’s best films, but it’s also one of the most necessary.

Want to decide what the movie’s like for yourself?
Check out Da 5 Bloods
via