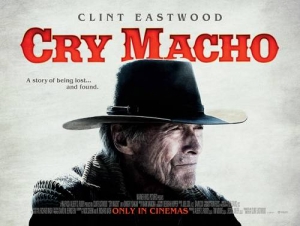 BASICALLY…: A retired rodeo star (Eastwood) is tasked with transporting a young man (Minett) across the border…

While it’s thoroughly impressive that Clint Eastwood is still making movies at age 91, the screen legend has certainly started to show his age in recent years. Between directing some oddly directionless dramas like Sully and The Mule, and making what is undoubtedly his worst ever film with The 15:17 to Paris, Eastwood seems to have misplaced a certain filmmaking spark which positioned him as one of our finest directors; the spark hasn’t completely gone out, but going by the current rate we’re probably never going to get another Unforgiven or Million Dollar Baby out of him.

His latest film as both director and actor, Cry Macho, only adds more fuel to the fact that Eastwood, in his twilight years, is not completely on top of his game. The film isn’t bad exactly, but it’s just okay; and in all honesty, only getting an “okay” movie from a real legend in front of and behind the camera still somehow feels like a raw deal.

Set in 1980, Eastwood plays Mike Milo, an elderly rancher and one-time rodeo star until an accident ended his career. One day, he is approached by his former employer Howard (Dwight Yoakam) who wants Mike to head across the border to Mexico City and pick up his young son Rafael (Eduardo Minett), who’s been living with his psychotic mother Leta (Fernanda Urrejola). Soon, Mike and Rafael – along with Rafael’s prized rooster named Macho – hit the road back to America, pursued by Leta’s henchmen who want the young boy back at whatever cost.

As you can see, it’s not the most challenging plot that Eastwood’s ever had to work with – by all accounts, it’s a very basic road trip movie that follows most of the regular beats – but to an extent, you can see why he would be drawn to making something like this. Beyond the fact that it probably wasn’t that hard to make (which, at his age, is probably relieving), Cry Macho’s simple themes of friendship and confronting what it is to be masculine serve as a mildly interesting breakdown of the singular macho image that Eastwood once exhibited throughout his career, and so in a broad sense you can surmise that he is trying to address those concerns at least once before he eventually passes. Additionally, unlike a number of Eastwood’s darker self-reflective movies, this one has a fairly good heart as Eastwood bonds with his young co-star (and his scene-stealing rooster) as well as other characters they encounter later on their journey, showing an underlying sweetness which the director is probably thankful for after making so many films where happy endings are almost never guaranteed.

However, Cry Macho is unlikely to rank among the filmmaker’s most cherished works any time soon, because the movie has severe pacing issues which even make its reasonably short runtime feel longer than it is. After a steady enough start, the movie starts sputtering almost as soon as the two characters hit the road; there are a number of repetitive scenes where they talk to each other in diners or by a campfire, often about the same thing as in the previous scene, and the threats that they encounter are very quickly dealt with, to a point where you question whether they actually are threatening at all. Things then stop dead for a large section of the movie, when Eastwood and his young ward hide out in a small town, where they befriend the locals, tame some horses and even briefly act as a veterinarian for people’s multiple pets; as sweet as some of these scenes can be, especially as Eastwood bonds with a nice widow and her granddaughters, it gets to a point where you just want things to pick back up again, and when they do it’s an almost literal race to the finish line. Had the structure been a little better spaced out, perhaps these things wouldn’t have been so noticeable, but in the condition they are it unfortunately leaves your attention span wandering for longer than it should.

Of Eastwood’s more recent films, Cry Macho isn’t among the worst, but even if it were top-tier latter-day Eastwood, it is still miles off from the filmmaker’s best work. While the fact that he is still around and making movies is admirable to say the least, it’s clear that Eastwood’s age is starting to impact on his ability to make compelling and insightful stories, instead settling for simple and rather muddled fare like this film. It’s a sad fact to take in, but 91-year-old Clint Eastwood isn’t nearly as good as he once was, and even if he does make another movie or two after this one, it’s time to admit that we’re most likely never going to get the real Clint Eastwood back again.

Cry Macho is a simple but muddled drama that sees director and star Clint Eastwood opting for less challenging material that has good heart and some underlying sweetness, but severe pacing issues and a noticeable lack of focus make it clear that the 91-year-old filmmaker’s best days are behind him.

Cry Macho is now showing in cinemas nationwide – click here to find a screening near you!