Cruella (Review) – If Only All Disney Remakes Were Like This 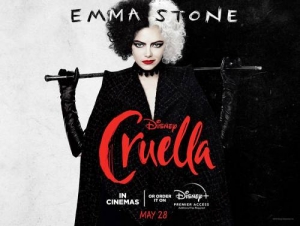 Whenever a live-action version of a beloved Disney animated movie comes out, the worst part about them isn’t really the films themselves (though sometimes they don’t make it easy to entirely defend), but rather the online discourse surrounding them, ignited by far-too-purist Disney fans who hate the fact that their childhood favourites are being tampered with or, in the case of Jon Favreau’s remake of The Lion King, not tampered with enough, and will apparently not stop until everyone shares their beliefs. It can be such a toxic minefield for anyone who just wants to try and enjoy one of these movies, regardless where they stand with the original Disney movies, that getting excited for a movie like Cruella suddenly feels awkward because you have to contend with so many angry commenters criticising you for having an opinion that doesn’t match theirs.

To anyone who shares these sentiments, I plead with you to follow your own instincts and don’t let spiteful online reviewers and commenters make you feel bad for wanting to watch anything, because your opinion is far more valid than anyone else’s. I certainly followed my own gut feeling and pursued with my unusually high interest in Cruella, and my curiosity was rewarded with a rather entertaining origin story that has a blast being its own unique film without relying too heavily on the source material.

The movie, directed by Craig Gillespie, tells the backstory of Cruella de Vil, the puppy-skinning villain of Disney’s One Hundred and One Dalmatians (and, subsequently, the 1997 live-action remake that famously starred Glenn Close as Cruella). As a child, named Estella, she is born with her traditional half-black, half-white hair, and struggles to fit in at school with her rebellious nature; however, after a tragic incident sees her mother (Emily Beecham) falling to her death, the now-orphaned Estella moves to London and shacks up with street thieves Jasper (played as an adult by Joel Fry) and Horace (Paul Walter Hauser). Years later, during the 1970s fashion scene, Estella (now played by Emma Stone) eventually secures a job working at a fashion firm that is fronted by the wicked, egocentric Baroness von Hellman (Emma Thompson), but when she discovers that the Baroness may have played a significant part in her mother’s death, Estella firmly adopts her “Cruella” persona as she sets out for revenge against the monstrous fashion queen.

While the Cruella de Vil of this film isn’t quite the truly evil villain who wants to skin puppies to make a fur coat (at least, not yet), she makes for a fabulous anti-hero in a story which compliments the character’s devilish, scheming nature while also making her palatable enough for an audience to want to see a movie about her. Director Craig Gillespie here brings a similar energy to his previous film I, Tonya, which also featured a morally ambiguous female lead in a dark and rather tragic sequence of events, but with Cruella mixes it up with some added stylistic flair, whether it’s award-winning designer Jenny Beavan’s rather fantastic costume designs which should at the very least be a nomination lock for next year’s Oscar category, or an awesome 70s soundtrack with tunes by The Rolling Stones, Nina Simone, The Doors and Blondie, to name but a few of the artists. For the most part, Gillespie paces his movie with refreshing liveliness compared to some of the more recent live-action Disney reboots, inserting some great music cues into certain shots, and directing his actors to lay on the charm and charisma to some familiar and new characterisations.

Stone is clearly having a blast as the title character, perfecting Cruella’s exaggerated speech patterns and infectious cackle down to a tee, while the actress has the emotional range to give her interpretation a surprising likeability, no matter how fierce and mean she can get. She is matched only by another Emma – Dame Emma, to be precise, with Thompson chewing and spitting out scenery left and right as the film’s true villain, and like Stone is having the time of her life being so insatiably cruel and cutthroat, like The Devil Wears Prada’s Miranda Priestly if she were born in the universe of Lemony Snicket’s A Series of Unfortunate Events. The two Emmas have wildly witty scenes together, helped by the fact that the script is co-written by Tony McNamara whose catty script for The Favourite also saw Stone lock heads with another female rival, and here the co-writer manages to bring some of that feisty energy to this film where both actresses are, once again, revelling in their delicious aura and highly acute fashion sense. Throw in some fun supporting turns from the likes of Joel Fry and Paul Walter Hauser as thieves Jasper and Horace, and John McCrea as a vintage fashion shop owner who allies with Cruella, and you have a strong ensemble surrounding the two main attractions.

As entertaining as it is, and is by far one of the stronger live-action Disney do-overs in recent years, it tends to slip up on its own narrative every now and then. It is longer than it needs to be, at just over two hours and ten minutes, due to a late-breaking twist which adds an extra but largely unnecessary half-hour to the overall plot, even though it seems that the movie is just starting to enter climax territory. Said twist might also be a cause for debate among some viewers, since it does needlessly tie together two characters who were doing just fine without it, and seems like it was added later on just to add a bit of extra drama, as well as filling some plot holes concerning Cruella’s role in the later One Hundred and One Dalmatians narrative.

By and large, though, Cruella manages to stand well enough in its own high heels, only occasionally making mandated references to the original material (Roger and Anita, the dalmatian-owning humans of the classic film, are minor characters in this film) and almost always dazzling with its own sense of style, ferociousness and undeniable charm. If only all Disney live-action reboots could be like this.

Cruella is a largely entertaining origin tale for the classic Disney villain, who is front and centre in a film that stands well enough on its own outside the original One Hundred and One Dalmatians narrative, and features stunning costume designs and plenty of fun turns, particularly by Emma Stone as the titular anti-hero and Emma Thompson as her on-screen foe.

Cruella is now showing in cinemas nationwide, and is also available to stream with Disney+ Premier Access.