Cruella de Vil Is Getting Her Own Movie

Cruella de Vil Is Getting Her Own Movie

Boy, Disney seems to be banking on its past work nowadays, doesn’t it? After all, a live-action retelling of 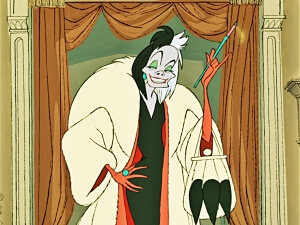 Cinderella is deep into principal photography at the moment, and a movie focusing on Sleeping Beauty villainess Maleficent – starring Angelina Jolie as the titular character – is on track for a release date next year.

But word has now come in of the company’s latest plans to give another one of their most memorable villains a chance to shine in the spotlight. And it’s none other than the ever-popular Cruella de Vil.

Simply entitled Cruella, the film will explore the story of the 101 Dalmatians villain who, in that film, was responsible for the dog-napping of 25 Dalmatian puppies and several others (thereby making up the 101 figure) with the hopes of skinning them and turning them into a new fur coat. That might sound harsh, but maybe the film will reveal that it’s all a coping mechanism for the fact someone actually named her Cruella de Vil (what horrible parents!).

Ms. de Vil, the initial creation of author Dodie Smith in her 1956 novel The Hundred and One Dalmatians, has been portrayed by two different women in her previous film adaptations by Disney: Betty Lou Gerson gave her the voice in the studio’s 1961 animated film based on Smith’s book, aka the version nearly everyone associated the story and character with; and Glenn Close brought her to a further state of life in the popular 1996 live-action version (and, for those counting, the 2000 sequel 102 Dalmatians).

Whoever takes on the role of Cruella de Vil in this new movie, currently being written by The Devil Wears Prada screenwriter Aline Brosh McKenna for producer Andrew Gunn, has a big fur coat to wear (pun unfortunately intended). After all, this is one of Disney’s most recognisable antagonists and if she doesn’t scare you, no evil thing will; to see her is to take a sudden chill… (altogether now) Cruella, Cruella de Vil!