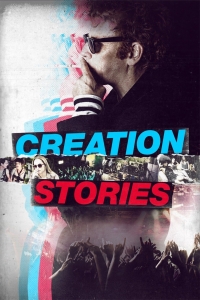 The legendary Alan McGee was at one point in his life many things: the owner of a successful record label that signed some of the most iconic talent of the late 20th century, a high-achieving entrepreneur with vast ambitions, and a hardcore drug addict whose intake of narcotics was so much that he once suffered a massive breakdown because of it. Above all, though, he was wild, restless, and decisively out-of-control, which is part of what makes Creation Stories such a fitting biopic about him, for it too possesses that uncontainable and absolutely off-the-walls energy that he himself exhibited, but ultimately his overwhelming compassion for what he loved to do pierces through all of the madness surrounding it.

That said, director Nick Moran’s film is quite an exhausting viewing experience, since its constant rhythm and frenetic editing can make it difficult to stomach at times, but an otherwise inventive script co-written by Irvine Welsh and a winning central performance from Ewen Bremner just about keeps it from completely succumbing to the biopic formula.

We follow Bremner’s McGee as he develops a love for alternative music, especially punk rock, as a teenager (as played by Leo Flanagan), living in Glasgow with his dysfunctional family, but eventually moving to London so he can kick-start his career in music – via a soul-crushing job working for National Rail. Eventually McGee and his associates found the record label Creation Records, through which they discover and sign bands like The Jesus and Mary Chain, My Bloody Valentine, and most famous of all a small-time band from Manchester known simply as Oasis. Some of McGee’s later episodes including his lending of support for New Labour and Tony Blair’s leadership are also documented, as well as his incessant drug use which increasingly gives us a chaotic vision of the world through his eyes.

“Chaotic” is perhaps our word of the day when describing this movie, because there is a lot that Moran’s film is trying to get across here, though vivid stylistic choices and wild tangents that almost make it an alternate universe version of Fear and Loathing in Las Vegas, but with lots more Glaswegian accents. Trainspotting certainly comes to mind a lot here, and not merely because of the involvement of that film’s original author Irvine Welsh (as co-writer here), as well as its co-star Ewen Bremner and even its director Danny Boyle (who takes on an executive producer credit for Creation Stories), for it also gets down and dirty in its depiction of hardcore drug use, not to mention a cracking soundtrack of late 80s and 90s alt-rock bangers. Moran’s film certainly feels like a more natural companion piece to Trainspotting than last year’s Schemers did, with this one being an overall better film because it at least has competent filmmaking behind it in addition to a lead who you’re actually comfortable with enjoying, but all the same Creation Stories is definitely hard to process at times, because the editing can be so haphazard and fast-paced that it leaves you with barely any breathing space in between a lot of major events in McGee’s life that are just skirting by here. Sometimes, you feel like you need to pause the movie and take a break for five minutes, just from how exhausting a lot of it can be.

There is also a sense that there isn’t much focus on display here, which on the one hand seems like that’s the point seeing how Alan McGee’s view of the world is so energetic and chaotic – there’s that word again – that making something a lot more straight-laced wouldn’t feel like it matches the anarchic spirit of its main figure. However, Nick Moran’s direction doesn’t seem to be tough enough to settle for any particular pace or tone whenever something major does happen, instead letting the vibrant style and co-writer Welsh’s wildly eccentric narrative tricks take over completely in lieu of a more solid flow. Moran has done fine directorial gigs in the past, including the underrated The Kid, but here he’s perhaps reached a bit too far out of his comfort zone, and often feels like a prisoner to McGee’s wild and insane persona which can’t seem to keep its facts and storytelling straight.

Ewen Bremner does manage to carry the film with a very hands-on performance, neatly capturing the real McGee’s vibrant charisma and wide-eyed optimism down to a tee, in a turn that amusingly also feels like another alternate universe where Bremner’s junkie Spud from the Trainspotting movies somehow got himself a cushy job as a record label owner (and thus access to a lot more drugs). Bremner keeps the party rolling for long enough to get us on board this on-screen interpretation of Alan McGee and his vivid experiences with fame and its many pitfalls, from raving it up in a nightclub while off his face on ecstasy, to unmistakable looks of horror and uncomfortableness when he encounters Jimmy Saville at, of all places, Chequers during a meeting with then-PM Tony Blair.

While the script by Welsh and Dean Cavanagh offers some fun jabs at things from politics to corporate-owned record labels, Creation Stories perhaps has way too much going on in its mind for this self-contained movie. There is so much on display here from the style to Ewen Bremner’s likeable lead performance, and it most certainly does not feel like a formulaic biopic which it very easily could have been, but ultimately it’s perhaps far too overwhelming to properly absorb. It’s probably the most accurate on-screen portrayal we’ll ever get of Alan McGee’s time as the head of Creation Records, which McGee himself will probably be most satisfied with, but for some audiences there’s just too much about Creation Stories that feels extremely – indeed – chaotic.

Creation Stories narrowly avoids biopic tropes with a vivid style, a fun script by co-writer Irvine Welsh, and an enjoyable charismatic lead turn by Ewen Bremner as Creation Records founder Alan McGee, but ultimately Nick Moran’s undisciplined direction as well as some haphazard, fast-paced editing and a chaotic display of life through McGee’s eyes can make it a very exhausting movie to sit through.