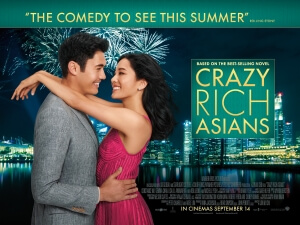 BASICALLY…: Asian-American Rachel (Wu) learns that her boyfriend Nick (Golding) is a member of one of the richest families in Singapore, but struggles to fit in to their extravagant lifestyle…

It’s not an easy task to make us feel any kind of sympathy for the 1%, but Crazy Rich Asians might just be the one to do it.

The film, based on the bestselling book of the same name by Kevin Kwan, has already experienced a major spike in the overall cultural awareness, with its entirely-Asian cast – the first of its kind for a major contemporary Hollywood release in decades – its glowing reviews from critics and several industry personalities, and its stellar (and as of this review still on-going) box-office performance in America after only dropping an unheard-of 6% in its second weekend, which for any film big or small is an absolutely marvellous achievement. There’s a reason for all of that: Crazy Rich Asians is an absolute delight of a film, gleefully aware of its romantic-comedy roots and doing some of its clichés with a fresh enough spin to make them feel like they’re being performed for the first time, and being such a charming and unapologetically sweet personality of a movie to be around.

The plot follows a woman named Rachel Chu (Constance Wu), a Chinese-American economics professor at NYU who is invited by her boyfriend Nick Young (Henry Golding) to come with him to Singapore for the wedding of his best friend Colin (Chris Pang) and his fiancé Araminta (Sonoya Mizuno), where he is due to act as best man. What Rachel doesn’t know, however, is that Nick is a member of one of the richest families in Asia, and that he is one of the continent’s most sought-after bachelors, putting Rachel and her decidedly less-affluent family heritage immediately into the spotlight as she begins to meet Nick’s extended family, including his mother Eleanor (Michelle Yeoh) who proves to be very hard to win over.

To say that the lifestyle that the rich folk in this movie enjoy is extravagant is quite the understatement; there are so many over-the-top displays of wealth and power in this film, from the big fancy houses they all occupy to their insane ideas for bachelor and bachelorette parties (including an entire island closed off just so the women can indulge in spa and shopping activities) to the wedding itself which is, quite frankly, the most beautiful wedding that I think I’ve ever seen in a film – seriously, I was even getting a little teary-eyed during it, and I never tend to cry at a wedding in real-life – that it’s almost unbelievable to witness, and while it’s most certainly played for laughs at times it’s still humorous to think that people with that amount of money could even pull off half the stuff they do in this film. However, what prevents the movie from being pure wealth porn is the fact that, despite their seemingly infinite amounts of money, you actually do like most of these characters; Rachel and Nick are a very sweet couple, with respective actors Constance Wu and Henry Golding sharing strong and believable chemistry with each other as well as being very charming and capable actors on their own terms; there are plenty of interesting and compelling characters in Nick’s family, including a wonderful Gemma Chan as the friendly and heartfelt Astrid who Rachel easily befriends, and an always-great Michelle Yeoh as the domineering and cold matriarch of the family; and even the comic relief of the film, here personified by Awkwafina’s Peik Lin (or “Asian Ellen” as her Ken Jeong-shaped father quips about her), Rachel’s former college roommate who herself comes from a family of wealth, is genuinely funny and an amusing character to be around, even though I can see why some people would find her pretty annoying. I hear this is based on a series of books, and I’m genuinely interested to read what happens to these characters in the next couple of stories, which given the huge success of this film means that we’re more than likely to see them be adapted as sequels, because they’re all so likeable, entertaining, and well-written that you leave wanting to desperately find out more about their stories.

As a romantic-comedy, it’s one of the freshest to come out of the genre in quite some time; again, you really feel the passion and chemistry between Rachel and Nick that you absolutely buy them as a romantic couple, and both are just so damn charming together that it’s impossible to resist; and it’s also a very funny film, from the things that Awkwafina says and does to just how ridiculously over-the-top some of these houses, parties and fashion choices can be within this film. It does include a number of rom-com clichés you’ve come to expect, but instead of rolling your eyes at how overdone some of them have been in the past, here you’re still intrigued by how it’s all going to play out, thanks to direction by Jon M. Chu that really makes it feel like these clichés are being performed for the first time, and plays them out in a very natural manner so that they don’t feel forced or even that formulaic. By the end of it, you’re so won over by these characters and the beautiful way in which this film is shot – again, that wedding scene is bound to make you cry from its sheer gorgeousness alone – that you don’t mind that parts of it are things you’ve seen a million times before in rom-coms.

I can absolutely see why this film has caught on like wildfire with audiences; it’s a captivatingly feel-good romantic-comedy that’s fun, charming, well-written, and very strongly acted by a cast that’s absolutely perfect for these roles, and when they do make sequels to this (because after its success, how could they not?) I would be crazy to skip them.

Crazy Rich Asians is an absolute blast of a romantic-comedy, one of the freshest of its kind to emerge in years due to its high levels of charm, heart, and characters that are loveable and compelling enough to keep you firmly engaged. You’d be crazy to miss out on this one.